For Giants QB Daniel Jones, it's a make-or-break season 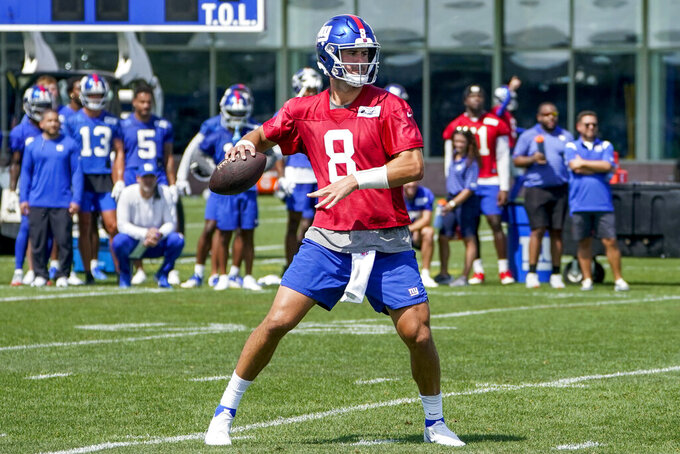 EAST RUTHERFORD, N.J. (AP) — While there will be plenty of New York Giants players, coaches and front office personnel under the microscope heading into the season, no one is going to be watched more closely than Daniel Jones.

The 25-year-old quarterback is heading into a make-or-break year as the Giants opened practice Wednesday for the first time in training camp.

New general manager Joe Schoen and the team didn't pick up the fifth year of Jones' 2019 rookie contract when he was the sixth pick overall in the draft. To be honest, there was little reason to do it. New York has had five straight losing seasons and Jones has been inconsistent in his three seasons under Pat Shurmur and Joe Judge.

The Giants haven't helped him much. His offensive lines have been weak, there have been injuries to running back Saquon Barkley in 2020 and then rookie wide receiver Kadarius Toney in 2021 in a dreadful 4-13 season.

Much has changed in the past seven months. Former Bills assistant general manager Joe Schoen has replaced Dave Gettleman as the GM. Brian Daboll, Buffalo's offensive coordinator, has taken over from Judge. There is again a new offensive system for Jones to learn, and the pressure is on.

If Jones struggles, the Giants are going to cut their ties. There has already been speculation about the Giants trading for San Francisco's Jimmy Garoppolo.

Jones has a 12-25 record as a starter and is coming off a season where he missed the final six games with a neck injury.

Daboll, who developed Bills star quarterback Josh Allen, said he is trying to teach Jones, correct the mistakes and continue his evaluation.

Toney is here for the start of camp and had a spectacular catch on a fade pattern in the right side of the end zone on a pass thrown by Jones.

Jones said there is reason for optimism with the new players, others returning from injury and more experience.

“I think it’s a hungry team who wants to play at a high level and is confident we can do that," Jones said.

As for the noise surrounding his season and his future, Jones is trying to ignore it. He just wants to prepare and play as well as he can.

“That’s been my approach, to enjoy playing football,” Jones said. “I love to compete and you get an opportunity to do that every day in practice.”

Besides the TD pass to Toney, Jones also threw one to rookie receiver Wan'Dale Robinson and ran about 10 yards for a touchdown on a draw in the 11-on-11 drills.

Left tackle Andrew Thomas, who had a great second season, believes the line will help Jones and Barkley, who is entering his second season following his ACL injury on Sept. 20, 2020.

“The goal is to be dominant — to be the bell cows of the offense,” the 2020 first-round pick said. “We want to lead the guys, protect DJ so he can make throws to all the playmakers. That’s the goal.”

NOTES: The Giants took rookie tight end Daniel Bellinger (quad) off the physically unable to perform list. That leaves WR Sterling Shepard, C Nick Gates and T Matt Peart on PUP. Shepard is being listed day to day. Gates is going to take a while to recover from a broken leg. ... LB Azeez Ojulari is not practicing because of a hamstring injury that was not football related. He was on the field Wednesday. ... Veteran LB Blake Martinez, who is coming off an ACL injury, didn't participate in the live drills. He believes he will be ready for the season opener against Tennessee.