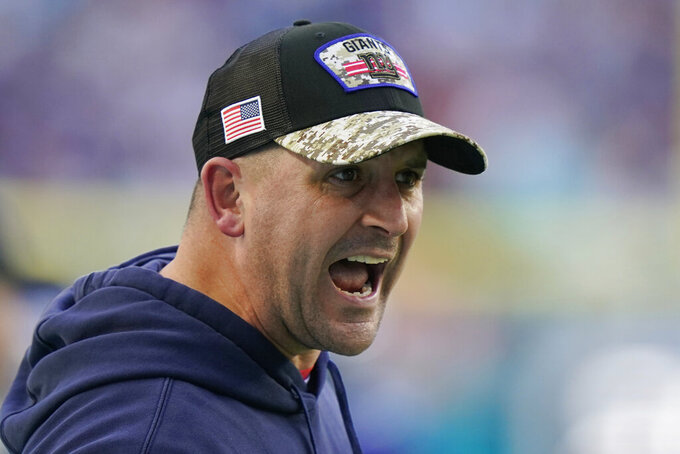 New York Giants head coach Joe Judge yells from the sidelines during the second half of an NFL football game against the Miami Dolphins, Sunday, Dec. 5, 2021, in Miami Gardens, Fla. The Dolphins defeated the Giants 20-9. (AP Photo/Lynne Sladky)

TUCSON, Ariz. (AP) — New York Giants quarterback Daniel Jones will miss his second straight game with a neck injury, and backup Mike Glennon will start despite sustaining a concussion in his start last weekend against Miami.

The Giants (4-8) ruled out Jones on Friday after doctors said he was not cleared for contract. The 2019 first-round draft pick was hurt in a start against the Philadelphia Eagles on Nov. 28.

Roughly an hour after Glennon practiced fully on Friday, the team said he was no longer in the concussion protocol and he was removed from the injury list. Coach Joe Judge has said all week the 31-year—old veteran would start against the Chargers in Los Angeles on Sunday if cleared by the doctors.

Glennon was 23 of 44 for 187 yards and an interception in the Giants' 20-9 loss to the Dolphins. He was sacked three times. His concussion was not diagnosed until after the game.

New York has struggled on offense this season and fired offense coordinator Jason Garrett after a loss to Tampa Bay on Nov. 22. It has scored a total of 22 points in the last two games with Freddie Kitchens calling the plays.

The Giants have trained in Tucson this week with five quarterbacks. Jake Fromm was signed off the Buffalo practice squad last week and he probably will back up Glennon. The former Georgia star has never played in a regular-season NFL game.

New York also has quarterbacks Brian Lewerke and Clayton Thorson on the practice squad. Lewerke has been on the squad all season while Thorson was in training camp.

The Giants also ruled out cornerback Adoree Jackson (quad) and rookie receiver Kadarius Toney (oblique). Receivers Sterling Shepard (quad) and Kenny Golladay (rib) are questionable after being limited in practice this week. Defensive tackle Danny Shelton missed practice on Friday because of a quad injury and is questionable.

By Rob Maaddi 9 minutes ago
By Josh Dubow an hour ago
By David Brandt 5 hrs ago
By Teresa M. Walker 6 hrs ago
By Tom Withers 17 hrs ago