Giants' Saquon Barkley playing for himself down the stretch 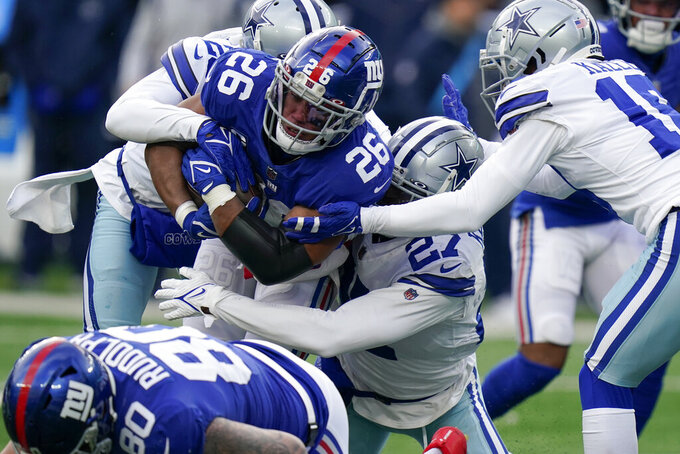 EAST RUTHERFORD, N.J. (AP) — Saquon Barkley believes he has spent most of the season discussing everyone else's expectations for him coming off major knee surgery.

The questions never stopped. Has recovering from an ACL injury been tougher than expected? Are you going to return to being one of the NFL's top running backs? Why are you gaining fewer yards than expected?

With three games left in the season, Barkley seemingly wants to shut out the noise with the Giants (4-10) preparing to play the rival Philadelphia Eagles (7-7) on Sunday.

Barkley said there are two things he wants to focus on. He intends to play with a team-first approach while also focusing on himself and getting better every day.

The 24-year-old Barkley tore the ACL and meniscus in his right knee in the second game of the 2020 season. He had surgery a little more than a month later and then spent the next nine months getting ready for training camp and eventually the season. It wasn't decided until days before New York's opener that he would play against Denver, and that would be on a limited basis.

There was rust and it took him a month to shows signs of the Barkley of old. In a road game at New Orleans on Oct. 3, Barkley ran for 52 yards on 13 carries and scored a game-winning TD on a 6-yard run in overtime. The second pick overall in 2018 also had five catches for 74 yards, including a 54-yard touchdown catch.

The following week, the Giants went to Dallas and Barkley was stoked. Running backs coach Burton Burns and then-offensive coordinator Jason Garrett both told him before the game they were expecting big things.

“I felt very confident that I was going to be able to have a big performance for the team and hopefully be able to turn the season around,” Barkley said.

With just over six minutes left in the first quarter, Barkley ran a short pass pattern over the middle and stepped on the foot of Cowboys cornerback Jourdan Lewis. He sprained his left ankle and missed the next four games.

Over the past year, Barkley has talked to many athletes about ACL injuries and has decided that each player's return is an individual thing. Some guys come back within a year. Others take two seasons to return to form.

“I think personally, not making excuses, I felt like after the Saints, I felt like that I would probably have been on track to being one of those guys within the next season to get back to where you were or even better and then I just had an unlucky step on someone’s foot,” he said.

Barkley's goal for now is just to improve.

“Basically, just finish the season with a high note, get better each week, keep continuing to go back, watch what I could learn from and improve my game,” he said.

Barkley refused to discuss his contact. He is due to make $7.21 million next season, the final year of his rookie deal.

“I think I made it clear that this is the place that drafted me,” Barkley said. “I would love to be here forever. But I mean, all the other stuff, I really don’t have time to focus on.”

Barkley also took the time to say he loves playing with quarterback Daniel Jones, who was shut down for the season earlier this week with a neck injury.

NOTES: WR Kadarius Toney was activated off the COVID-19 list. The rookie wide receiver has not played since Nov. 22 at Tampa Bay. ... Coach Joe Judge said two players on the COVID-19 list, LB Oshane Ximines and DB J.R. Reed, returned to the team facility and worked with trainers. ... RB Gary Brightwell (neck) was limited in practice. He missed practice Wednesday after being hurt Sunday against Dallas.