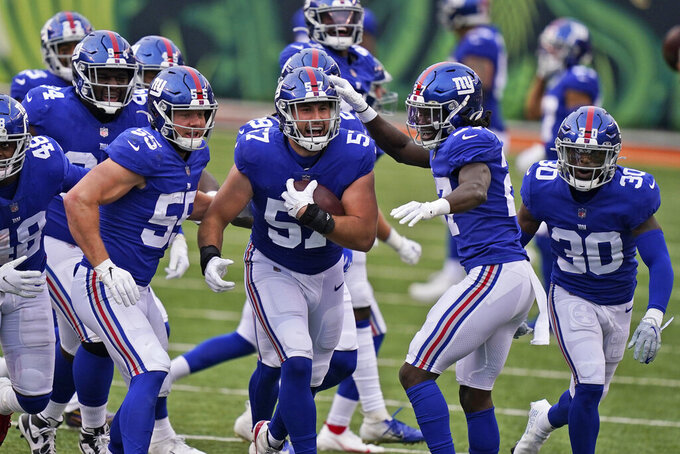 New York Giants defensive end Niko Lalos (57) celebrates an interception with teammates during the second half of an NFL football game against the Cincinnati Bengals, Sunday, Nov. 29, 2020, in Cincinnati. (AP Photo/Bryan Woolston)

Webb is listed as a quarterback, but has also caught passes, run the ball and returned kickoffs. The 34-year-old has played in 102 regular-season games with Minnesota, Carolina, Buffalo and Houston. His most recent action was at the end of the 2018 season with the Texans.

Lalos, a rookie free agent from Dartmouth, played in the past two games as a standard elevation from the practice squad. He intercepted a pass in the first game against Cincinnati and recovered a fumble this past weekend against Seattle.

Harris joined the Giants’ practice squad on Oct. 14 and was signed to the active roster three days later. He played in four games with two starts and had five tackles and a half-sack. Harris was inactive for the past two games.