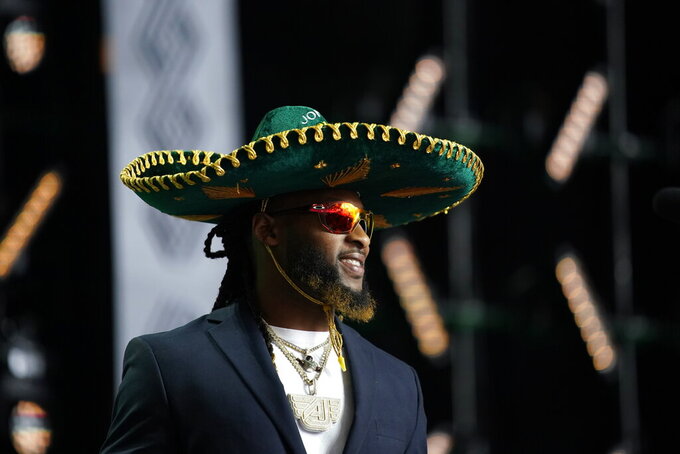 The Packers traded up 19 spots to take Watson with the 34th overall selection in the NFL draft Friday as they seek more targets for reigning MVP quarterback Aaron Rodgers now that All-Pro receiver Davante Adams is gone.

“Obviously being able to catch passes from one of the best to ever do it is something I’m definitely excited about,” Watson said. "I feel like I’m going to be able to learn and grow a lot through not just him but all the other receivers and everyone else in the organization as well. I definitely couldn’t be more excited to go at it with Aaron Rodgers.”

The Packers also selected UCLA offensive lineman Sean Rhyan in the third round with the 92nd pick. Rhyan was a three-year starter at left tackle during his college career but also could play guard.

Green Bay opened the day with two second round selections – the No. 53 and No. 59 picks. The Packers traded both to the Minnesota Vikings for the right to take Watson at No. 34.

“We did feel we had to go there to get him, ” Packers general manager Brian Gutekunst said.

Although the Packers haven’t selected a wide receiver in the first round since taking Florida State’s Javon Walker 20th overall in 2002, they’ve developed a knack for finding wideouts in the second round.

One of those guys was Adams, who went 53rd overall in 2014 out of Fresno State . The Packers traded Adams to the Las Vegas Raiders last month in a deal that brought them the 22nd and 53rd overall picks in this year’s draft.

Other receivers to have productive seasons in Green Bay after getting drafted in the second round include Greg Jennings (2006), Jordy Nelson (2008) and Randall Cobb (2011).

“We’ve had a lot of success with second- and third-round receivers in Green Bay,” Rodgers said Thursday night on Pat McAfee’s SiriuxXM and YouTube show after the Packers didn’t take a receiver in the first round. “You look at Greg Jennings, Jordy Nelson, Randall Cobb, James Jones in the third round (in 2007), obviously Davante Adams in the second round. Those guys turned out pretty good.”

The Packers believe Watson can be the next in line.

The 6-foot-4 wideout showed his explosiveness at North Dakota State by averaging over 20 yards per catch. North Dakota State won Football Championship Subdivision titles in four of his five seasons at the school, including one redshirt year.

“He's a big, fast, physical receiver,” Gutekunst said. “We think his best football is ahead of him. ... We got a chance to spend a lot of time with him and felt he was a really smart kid that we feel could fit our culture.”

While Watkins' physical skills are obvious, he didn't put up overwhelming numbers. His 43 receptions for 801 yards and seven touchdowns last season represented career highs in all three categories.

“I don’t think it was for a lack of anything that Christian did or didn’t do,” Packers director of football operations Milt Hendrickson said. “If you’re familiar with NDSU, they love to run the football. His opportunities will come and go sometimes.”

Watson has family ties to the Packers.

The Packers drafted his father, former Howard defensive back Tim Watson, in the sixth round in 1993. Watson never actually played for the Packers in an NFL career that included stints with the Kansas City Chiefs, New York Giants and Philadelphia Eagles.

“Being able to follow in his footsteps and be drafted by the same club is extra special to me for sure,” Watson said. “It’s definitely a surreal experience. Just getting the phone call itself brought tears in my eyes, I was so excited.”

The Packers’ top returning receiver is Allen Lazard, who had 40 catches for 513 yards and eight touchdowns last season.

Green Bay also needed to add offensive line depth after releasing Billy Turner and losing Lucas Patrick in free agency, leaving the Packers without two starters from last season. Rhyan should help in that regard.

“I’m extremely versatile as well as available,” Rhyan said. “I never missed a snap in college due to an injury. I was only pulled from a game if we were stomping the other team and we wanted to get some of the other guys some playing time.”

On Thursday, Green Bay focused on defense in the first round by taking a pair of Georgia defensive teammates, using the 22nd overall selection on linebacker Quay Walker and taking tackle Devonte Wyatt at No. 28.

The Packers enter Saturday with two picks in the fourth round, one in the fifth and three in the seventh. They could use more receivers and also may want to add an outside linebacker to complement Rashan Gary and Preston Smith after releasing Za’Darius Smith in a cap-related move.