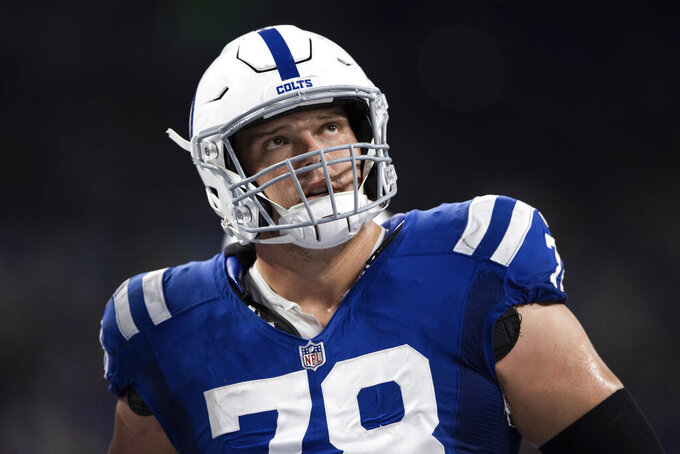 FILE - Indianapolis Colts center Ryan Kelly watches a replay during the team's NFL football game against the Jacksonville Jaguars on Nov. 14, 2021, in Indianapolis. Mary Kate, the infant daughter of Kelly and his wife, Emma, died about two weeks ago. (AP Photo/Zach Bolinger, File)

From the inspirational message he penned for his wife, Emma, to the grief-stricken pauses as he spoke, the Pro Bowl center shed his tough-guy persona and provided a glimpse into how painful life has been since their infant daughter died about two weeks ago.

“For 24 hours I watched and held my wife’s hand as she labored with our daughter," Kelly said, reading from a prepared statement. “We didn’t get to later, where you get to wrap your baby up and take them home. It wasn’t in God’s plan for our sweet girl. We had to say goodbye, the hardest thing that either of us has ever and hopefully will ever have to go through."

Mary Kate Kelly was born Dec. 17 at a hospital on the north side of Indianapolis. She was the couple's first child, and Ryan's exuberance was on full display when he talked gleefully about being a “girl daddy" during a recent episode on “Hard Knocks In Season: The Indianapolis Colts."

Last week's episode ended with a tribute to Mary Kate, but for the Kellys, the anguish, naturally, lingers.

When he spoke Thursday, the 28-year-old Ohio native described the tears rolling down his wife's face in a hospital bed, the strength she showed through the ordeal and how proud he was to be her husband. He called her a rock star.

And while the healing process has only just begun, Kelly believes it's time he gets back to work.

He's expected to return to Indy's lineup Sunday when the Colts can clinch a playoff spot with a win over Las Vegas — even as he tries to cope with the biggest loss of his life.

“(Wednesday) was probably the hardest day, walking back into the office and just seeing people. They don’t know what to tell you.," Kelly said. “Unless you’ve been in the situation, you don’t know what to say. For me, this is healing in itself and selfishly, I feel bad because my wife is at home. She’s taking care of the dogs and grieving by herself, but I know she’ll get through it, too.”

Colts coach Frank Reich, general manager Chris Ballard and team owner Jim Irsay never wanted Kelly to rush back. They repeatedly encouraged him to take as much time off as he needed, even when they could have used him with a short-handed offensive line Christmas night at Arizona.

Instead, Kelly, with the Colts' blessing, stayed home and grieved with his wife. He didn't practice the day Reich announced Kelly was one of seven Colts players selected to the Pro Bowl and he missed two of Indy's biggest wins of the season — Saturday night classics over New England and the Cardinals.

While Kelly followed the games and cheered on his teammates from afar, the man who was part of two national championship teams at Alabama understood he was where he needed to be.

“I just imagined my wife being by herself on Christmas and that was like the hardest thing ever to me," Kelly said. “We buried our daughter on (that) Tuesday and I knew there was no way I could be ready. Wednesday was the first day after that that we hadn’t had any family in town. That’s the hardest, just being in your house where you’ve made so many memories. I just knew there was no way if I went back to work Thursday that I would be ready to go Saturday."

Every part was difficult.

Yes, Kelly appreciated the support and prayers offered by so many inside and outside the Colts organization and he took time to thank everyone from family members to close friends, even the doctors and nurses at the hospital.

But the condolences and flower arrangements spread around his home did little to help.

“You never want those thoughts and prayers and the flowers, but obviously it goes to show just how many people care about us," he said. “I remember sitting there, we watched the (Patriots) game and it was awesome. Somebody sent me that David Andrews, their center, and (Bill) Belichick had mentioned us. At that time, it was the darkest day ever. We never thought there would be light ever again."

A postgame text message from Reich and Irsay's teary-eyed locker room speech provided some comfort. And when Kelly returned to the team complex Wednesday for the first time since the tragedy, the emotions came racing back.

Four-time Pro Bowl receiver T.Y. Hilton gave Kelly a hug. Jonathan Taylor, the NFL's leading rusher, offered to support Kelly in any way possible. Everyone wanted to help, but nobody was quite sure what would.

“It was heartbreaking," 2020 All-Pro defensive tackle and father DeForest Buckner said. “I can’t even imagine the grief they’re going through and trying to come back from that."

But as difficult as all this has been for the Kellys, one thing is clear.

Lining up in a game that could determine Indy's postseason fate is just one more step in the healing process.

“It just feels right to be back,” Kelly said. “I know that being here is where I need to be right now. It doesn’t make it any easier. I mean, take it minute by minute. That’s kind of how it goes. I’m just taking it one day at a time.”