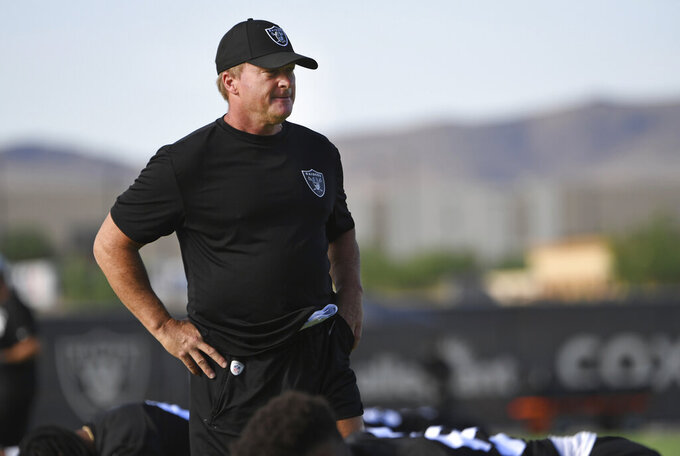 The policy will take effect for the Raiders' home opener on Sept. 13 against Baltimore.

“Every state, every team is probably going to have a different view on this. I support the decision that was made," Gruden said after practice Tuesday as his team prepared to depart for joint practices in LA before Saturday’s game against the Rams. “I know it’s a touchy subject for a lot of people, but I do support the direction we’re heading, and I encourage everybody that I know to get the vaccine and come and join us.”

The Raiders had more than 50,000 fans for last Saturday’s preseason opener against the Seattle Seahawks, with a mask mandate in place.

The Raiders implemented the change for the regular season in accord with new directives from Nevada Gov. Steve Sisolak regarding large events. Vaccinated fans will not need to wear masks at the games.

“We’ve had four events with masks mandated (at Allegiant Stadium) and it’s so impossible to police,” Raiders owner Mark Davis said during a new conference Tuesday to address the vaccine policy. “We’re excited about the opportunity to have consistency for this season.”

NOTES: TE Darren Waller returned to practice for the first time since Aug. 2. Though the Raiders’ leading receiver the last two seasons never showed any specific signs of injury, he spent the last two weeks working on his own, either in the weight room or on a far field at the facility with trainers. ... Backup QB Marcus Mariota, whom Gruden said had tweaked his leg during an Aug. 8 practice, was back on the practice field, as was S Karl Joseph. ... CB Isaiah Johnson and LB Divine Diablo have been on the physically unable to perform list but were also on the field.