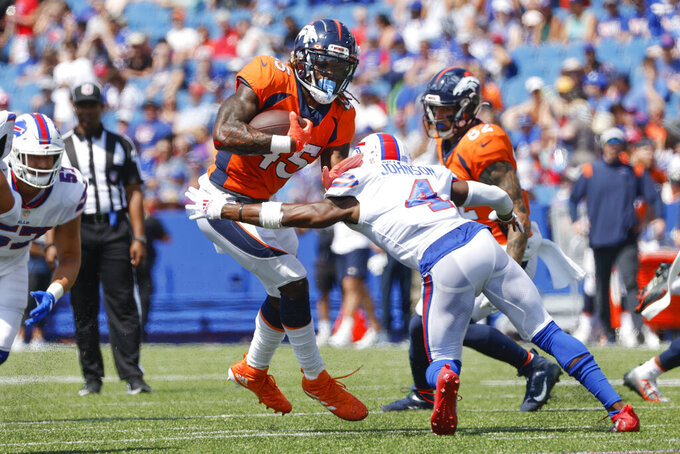 ENGLEWOOD, Colo. (AP) — Nathaniel Hackett apologized for the Denver Broncos being so disjointed and out-of-sync in their lopsided preseason loss to Buffalo.

“Sorry for that game," the first-year Broncos coach said Monday. “That is not what we're looking for.”

Still, Hackett remains steadfast in his stance of not playing quarterback Russell Wilson and many of the other starters before the season opener in Seattle.

“We want to see them in real games,” Hackett said two days after a 42-15 loss to the Bills. “We want that to happen.”

Hackett knows that Broncos faithful are eager to get a glimpse of Wilson & Co. in action — even if just for a series or two — during the preseason finale Saturday as Denver hosts Minnesota.

But keeping starters on the sideline was a strategy that worked when Hackett was the offensive coordinator in Green Bay last season. The Packers went 0-3 in the preseason — got beat 38-3 in the season opener — but clinched home-field advantage.

“In the end they were healthy, and they were strong as we finished throughout that season,” said Hackett, who was brought in to help the Broncos end a six-year playoff drought. “So that’s what you’re always looking for.”

His players get the reasoning ahead of the opener on Sept. 12.

“Football is a dangerous sport. Anytime you go out there, it’s a chance of getting hurt," said running back Javonte Williams, who rushed for 903 yards as a rookie in 2021. "So I respect what the coaches are doing with the starters and things like that. I can’t complain.”

It was difficult for starting linebacker Josey Jewell to watch as Josh Allen and the Bills offense rolled through the Broncos’ second- and third-string defensive players. The Bills scored touchdowns on six straight drives with three different QBs.

“You want to go out there and help and get that one stick in there, that one drive-stop, and help them out,” Jewell said. “But it’s part of the process, learning from your mistakes. ... It's good experience, too, for some of those young guys.”

Hackett harped on the importance of cleaning up those mistakes this week in practice.

“Otherwise, that whole game was a complete waste,” said Hackett, whose team beat Dallas to begin the preseason schedule. “You want to get all that stuff out right now during the preseason. Hopefully, we got a lot out during that game.”

Hackett said the plan from a personnel standpoint for the Vikings game will be similar to last weekend. The quarterbacks will be a combination of Josh Johnson and Brett Rypien as they compete for the backup role behind Wilson. One player who may see some time is receiver KJ Hamler. He's recovering from knee and hip surgeries. The Broncos are hoping to get him more involved in individual and team drills this week.

“We’ll see. He might be a guy that needs to get some reps in the preseason game,” Hackett said. “We’re going to communicate and make sure that he gets what he needs to get ready."

NOTES: Hackett said punter Sam Martin will be available this weekend. Martin got injured in warmups before the Buffalo game. ... OL Tom Compton (back) is expected to start on the physically unable to play list. ... The Broncos were awarded running back Devine Ozigbo off waivers from New Orleans. The team designated defensive end Marquiss Spencer as waived/injured.