Hail to the who? Tanya Snyder drops Commanders for old name 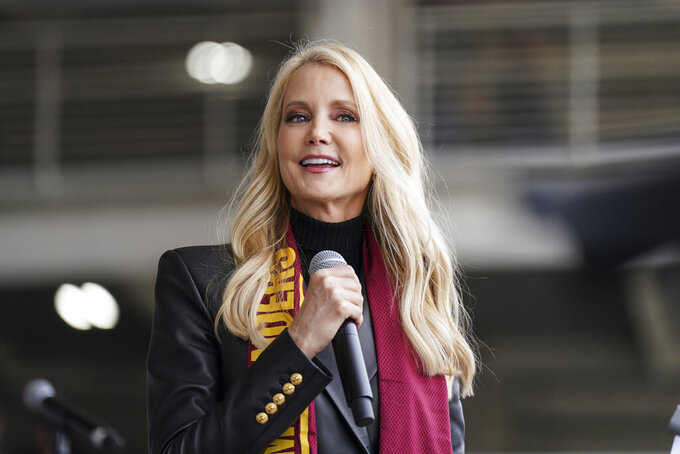 LANDOVER, Md. (AP) — Under investigation and under scrutiny like never before, team owner Daniel Snyder was nowhere to be seen at the rally that preceded the Washington Commanders' “homecoming” game Sunday.

Instead, his wife, Tanya, greeted the sparse crowd of fans who showed up to meet players from the past as the renamed franchise celebrated 90 years since its founding.

Maybe she forgot about the branding change that discarded the club's offensive nickname, because at the conclusion of her remarks — which, oddly enough, included a reference to “seven decades of fantastic football” — she declared: “Hail to the Redskins! And let's beat Green Bay.”

The second part did happen, thanks to the way backup quarterback Taylor Heinicke, starting in place of the injured Carson Wentz, rebounded from a 1-for-7 start that included a pick-6 and steered the Commanders past four-time NFL MVP Aaron Rodgers and the stumbling Packers 23-21.

“He didn't show any signs of being rattled,” receiver Terry McLaurin said about Heinicke after grabbing a 37-yard TD pass in the third quarter and two key third-down completions in the fourth. “He plays like it’s his last game, every single time. That energy just spreads throughout this team. You just want to be able to make that play to elevate him.”

Washington (3-4) welcomed back dozens of former players who paraded around the stadium, then met with fans, before the game. Among those attending: Pro Football Hall of Fame member Art Monk and Super Bowl-winning quarterback Mark Rypien.

Team president Jason Wright also threw in a reference to the former nickname, telling the crowd, “Hail to the 'Skins and hail to the Commanders.”

This came at the end of a week in which Daniel Snyder — who once vowed never to change the name of his franchise but did in 2020 during a national reckoning about racism — was a main focus of the league's owners' meetings in New York. And not in a good way, even though he was not a part of the formal agenda.

He is the subject of several inquiries — by Congress, by the NFL, by the attorney general of D.C. — that cover allegations of sexual misconduct and financial impropriety. Indianapolis Colts owner Jim Irsay, whose team happens to be Washington's opponent next week, said there’s “merit to remove” Snyder, which would require a vote by 24 of the 31 other owners.

There would also be another way, of course, for Snyder to move on, and spectators at Sunday's game shouted it as a suggestion when his wife was shown on a video board: “Sell the team!”

At least they had reason to cheer by the end of the contest, thanks in large part to Heinicke, who ended up 20 of 33 for 201 yards, two touchdown passes and one interception in his first start of the season.

“I play best when I don't think too much,” said Heinicke, who played college football at Old Dominion.

He acknowledged “some jitters” at the outset Sunday, saying, “I hadn't played a full game in a long time.”

Wentz broke the ring finger on his throwing hand during last week's 12-7 victory at the Chicago Bears and is out for at least four games while on injured reserve.

After Sunday's game, Wentz was wearing a black brace on his right hand when he approached Heinicke for a brief exchange in the locker room.

“He was proud of me," Heinicke said. "We've really worked to develop this relationship that we have and it's great. I do everything in my power to make him better and he does the same for me. He was there helping me out throughout the whole game.”