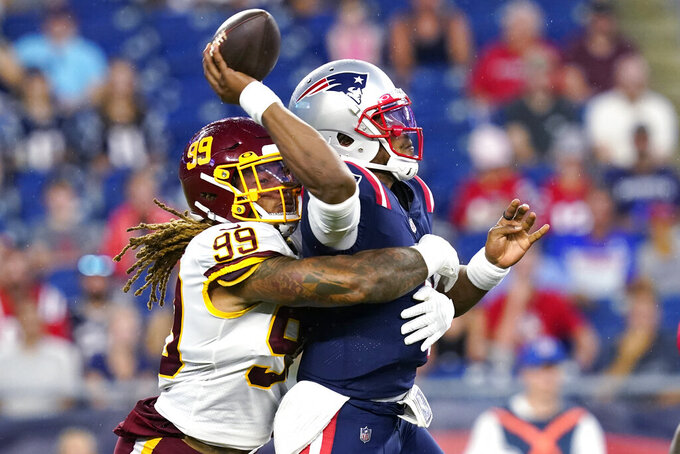 LANDOVER, Md. (AP) — With Justin Herbert the first of several top quarterbacks on the docket this season. Washington's defense is taking on Jack Del Rio's approach to respect every opponent but fear nobody.

Having a feared pass rusher of its own in Chase Young is a good start.

The Los Angeles Chargers' season opener at Washington is a showdown between the reigning AP Offensive and Defensive Rookies of the Year. Herbert's offense against Young's defense is the matchup that should determine who wins the biggest toss-up in Week 1 of the NFL season.

"They’re a good defense and they need all of our attention," Herbert said. “They’re a really incredible front seven. They’re about as good as it gets.”

After Herbert set rookie records with 31 touchdown throws and eight games with 300 yards passing, he gets a new coach in Brandon Staley, who was defensive coordinator across town with the Rams. And he'll have a rebuilt offensive line led by rookie left tackle Rashawn Slater, the 13th pick out of Northwestern who was one of the rare blockers to hold Young in check in college.

After leading rookies with 7 1/2 sacks in 2020, Young's attempt to break records in that category starts against Slater, who he said has “real good feet, strong hands.”

“ I feel like if I go hard every play, he can’t block me every time," Young said. "Their whole O-line is pretty good, so as a D-line, we’re excited to get after them.”

Ron Rivera, going into his second season as Washington's coach after winning the NFC East last year at 7-9, said Young gets excited to play every week. Facing a quarterback like Herbert — and later this season Josh Allen, Patrick Mahomes, Aaron Rodgers, Tom Brady and Russell Wilson — only amps up Young even more.

Washington's defense ranked second in the league during Young's first pro season, and now he's trying to get to the next level as an elite pass rusher.

“I want to see him take another step," Rivera said. "Last year we saw what he did as a rookie coming in, who was an explosive, excitable, dynamic player. But you want to see more consistency. You want to see him be able to take his skillset to another level.”

The same goes for Herbert, who showed veteran poise last season by completing 27 of 44 passes for 361 yards when blitzed by five or more defenders, according to SportRadar. Throwing for 31 TDs with just 10 interceptions caught the eye of seasoned QB Ryan Fitzpatrick, who called Herbert's rookie season “ridiculous.”

“You’re not supposed to come in as a rookie and look that polished and play that well, be that composed,” said Fitzpatrick, who’s now Washington’s starter. “He’s kind of got all those tools physically and then all the intangibles, as well.”

Staley has already noticed the tangible benefit of spending time getting to know Herbert. The first-time NFL head coach expects the season opener at Washington and the next several weeks to show how his trust with Herbert has developed.

“We’ll know where our relationship is as the season goes on because once you start playing games and a lot is at stake, that’s when you really have to test your relationship,” Staley said. "I know this: I couldn’t ask more from a starting quarterback."

Fitzpatrick is set to start for a ninth team in his 17th pro season, bringing the “FitzMagic” to Washington at age 37. The well-traveled bearded quarterback has embraced the nickname and comeback magic is part of his journey. He's not lost the appreciation of starting in the NFL.

“It’s a huge honor to be one of the 32 guys that is leading a team in the action,” he said. “It’s not a responsibility I take lightly, but it’s also not something I take for granted. This is something I’ve worked very hard to do and I know that there’s a lot of people in and outside of this building that are counting on me to go out there and perform.”

Chargers safety Derwin James is eager to play in his first game in nearly 19 months. An All-Pro selection as a rookie in 2018, James has played just five games the past two seasons and missed all of last year after tearing the meniscus in his right knee in training camp.

Staley is counting on James to set the tone for a unit that squandered five double-digit leads last season. James will call the plays in the huddle, anchoring a secondary that includes fellow safety Nasir Adderley and cornerbacks Chris Harris Jr., Michael Davis and second-round pick Asante Samuel Jr.

“You’re going to have to figure out where guys are,” James said. "By the time the ball snaps, we are already moving around. It’s going to be tough.”

The Chargers' running game could struggle if Austin Ekeler is sidelined with to a hamstring injury.

Justin Jackson has shown flashes with his speed, but he missed most of camp with an injury, Joshua Kelley struggled with ball control and confidence issues last season, and rookie Larry Rountree III is more of a short-yardage back. Ekeler’s possible absence would also be a blow to L.A.’s passing attack because he's a valuable weapon catching the ball.

Washington's players and staff feel good about their air game without Curtis Samuel, whose groin injury has lingered for months. It gave Fitzpatrick the opportunity to throw more to rookie Dynami Brown, young receiver Cam Sims and free agent additions Adam Humphries and DeAndre Carter, who will all be counted on for more snaps in Samuel's absence.