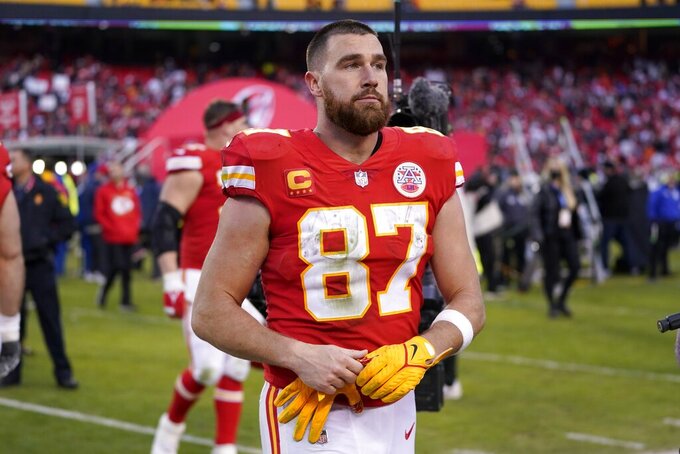 Double-digit leads in the second half with a berth in the Super Bowl at stake are typically pretty safe in the NFL.

That wasn't the case on conference championship Sunday when the Kansas City Chiefs and San Francisco 49ers both blew leads in the latest in chapter for franchises with a history of playoff collapses.

The comebacks by Cincinnati in the AFC title game and the Los Angeles Rams in the NFC title game mark the first time in 23 years that both Super Bowl participants overcame deficits of at least 10 points in the conference title game.

Denver did it against the Jets in the 1998 season, and Atlanta did it against Minnesota. In all, there had been only eight games in the Super Bowl era when teams overcame a double-digit lead in the second half of the conference title game before Sunday.

The Chiefs led Cincinnati 21-3 in the first half before losing 27-24 in overtime, marking just the fourth time in NFL history a home team has blown a lead that big in the postseason.

It last happened four years ago, when Kansas City also led 21-3 before losing 22-21 to Tennessee in the wild-card round. The only other franchise to do it was the 49ers, who blew a 20-point lead to Detroit in the 1957 playoffs and an 18-point lead to Dallas in 1972.

Those weren't the only two playoff collapses for the Chiefs under coach Andy Reid as they also blew a 28-point, second-half lead at Indianapolis in a wild-card loss following the 2013 season.

The Niners held their 17-7 lead over the Rams into the fourth quarter before losing 20-17, becoming just the fourth team to lose in this round after leading by at least 10 points in the final quarter, with Jacksonville the last to blow it in the 2017 AFC title game loss to New England.

This comes two years after coach Kyle Shanahan's Niners blew a 10-point lead in the fourth quarter of a Super Bowl loss to the Chiefs. Shanahan was also the offensive coordinator in Atlanta when the Falcons blew a 28-3 second-half lead in the Super Bowl to New England six years ago.

The only other team to lose a playoff game in the past seven seasons when leading by at least 10 points after three quarters was the Chiefs in that wild-card loss to Tennessee in the 2017 season.

The NFL had another weekend of tight games with both conference championships decided by a field goal.

That comes one week after all four games were decided with a score on the final play in the divisional round.

The average margin of victory the past two weeks has been 3.5 points per game, the lowest combined mark for the divisional round and conference title games since the merger. The previous low was 6.7 points per game in 2003.

Eight of the first 12 playoff games have been decided by seven points or fewer, tied with the 2010 season for the most games that close in a postseason.

Damion Square began the postseason by recording three tackles for the Raiders in a wild-card loss to the Cincinnati Bengals.

Two weeks later, the veteran defensive lineman suited up for Cincinnati, playing 15 snaps in an AFC title game win over Kansas City. That made Square the first player to appear for two teams in the same postseason.

The unprecedented feat was only possible because Square was elevated from the practice squad to play for the Raiders. He then was signed to the Bengals practice squad before being elevated for the game.

Jared Veldheer nearly pulled that off last season, appearing in a playoff game for the Colts and then signing with Green Bay. But Veldheer went on the COVID-19 list before playing for the Packers.

Rich Bisaccia's reward for making the Raiders the first team in 60 years to make the playoffs following an in-season coaching change was looking for a new job.

Bisaccia led Las Vegas to a 7-5 record as interim coach after Jon Gruden resigned and the team's second playoff berth in the past 19 seasons. But that wasn't enough to get the full-time job when owner Mark Davis opted for Josh McDaniels instead.

Bisaccia became the fourth coach in the past 16 seasons to be let go following a playoff season. The last three teams to do it had quick success.

Tennessee fired Mike Mularkey after he went 9-7 in 2017 and won a playoff game. Mike Vrabel was hired and got the Titans to the AFC title game his second season.

Norv Turner did the same for the Chargers when he took over for Marty Schottenheimer following a 14-2 season in 2006.

Gary Kubiak did even better after replacing John Fox in Denver after four straight playoff seasons from 2011-14. The Broncos won the Super Bowl in Kubiak's first season.

Kansas City stars Patrick Mahomes and Travis Kelce hit some milestones — even if it came in a losing cause.

Mahomes became the first quarterback since Peyton Manning 18 years ago to throw TD passes on the first three drives of a playoff game to give him 11 overall this postseason. That ties the single-season mark held by Joe Montana (1989), Kurt Warner (2008) and Joe Flacco (2012).

Kelce had 10 catches for 95 yards and a TD, his record sixth straight playoff game with at least 95 yards receiving.

Kelce also became the third player with at least 100 postseason catches, with his 106 receptions trailing only Jerry Rice (151) and Julian Edelman (118). Kelce is also tied for the third-most TD catches in the playoffs with 12, trailing only Rice (22) and Rob Gronkowski (15).