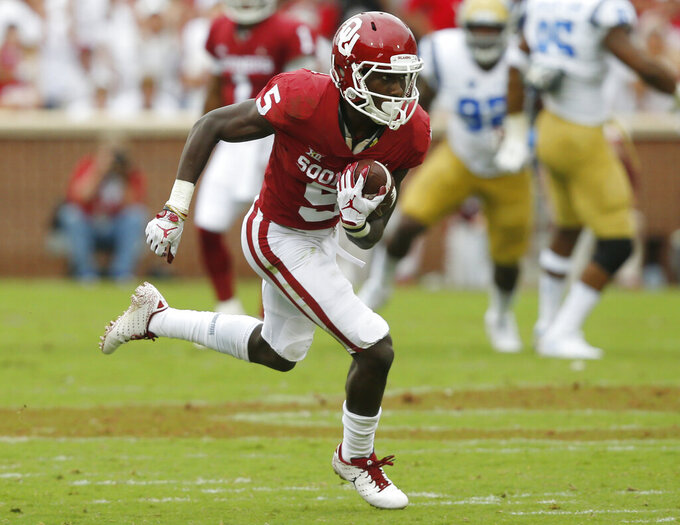 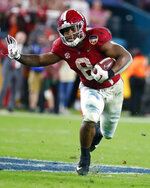 NASHVILLE, Tenn. (AP) — Marquise Brown knows too well the challenge of stretching $20 over a month to feed himself, with help from discounted meals at work and food from his junior college coach. Josh Jacobs had days when he ate only if he stole something.

Brown put on about 10 pounds his first week at Oklahoma, and Jacobs gained about 30 at Alabama, helping turn him into a Southeastern Conference running back.

It's why the two likely first-round NFL draft picks happily helped volunteers fill 8,000 backpacks for hungry children Wednesday morning as part of a league initiative, Huddle Against Hunger. Both Brown and Jacobs know too well what the cans of soup, the cookies and chips mean to someone with an empty belly.

"Especially being from my background and doing this type of lifestyle that I had and not knowing if I was going to eat certain days, it's definitely dope just to be able to give back," Jacobs said.

Brown could have used one of those backpacks himself within just the past three years.

"I had no food, I had nothing," Brown said. "So just doing this I know the impact it has on someone's life."

Growing up as the middle of five children with only his father around in Tulsa, Oklahoma, Jacobs slept at times in cars and motels.

Brown was barely 140 pounds when he arrived at College of the Canyons in California needing to work on both his grades and add some weight. Junior college had to be paid for, and the native of Hollywood, Florida, also needed a place to live while trying to attract the attention of a Division I program.

Brown stretched that $20 going to Family Dollar and stocking up on ramen noodles, cereal and frozen food. He ate at Six Flags when working to take advantage of discounted meals for employees. His junior college coach also helped.

"My head coach, he brought cereal in for me, different type of foods just so I could have a meal," said Brown, who brought that coach to Nashville to enjoy the draft that begins Thursday night.

Brown earned his way to Oklahoma, where he didn't have to worry about food in 2017 and 2018. Now he's listed at 166 pounds and still light enough that some question whether the 5-foot-9 receiver can survive a 16-game NFL season. His answer? Just wait.

"Going to the NFL getting more time, getting more development with nutrition and in the weight room, I feel like I'm going to put my body in the best shape," Brown said.

The backpacks will be delivered Friday morning as the NFL kicked off its community programs celebrating its 100th season. The Tennessee Titans, who helped lure this year's draft to Nashville, also donated $50,000 each Wednesday to Second Harvest and the Bridge Ministry.

Hearing how many children deal with hunger was surreal for Jacobs. That only reinforced his desire to help feed people once he's in the NFL.

First, he's hoping to celebrate Thursday night with his family for the next step of his journey.

"It's definitely dope to experience all this together," Jacobs said. "Everything that we experienced growing up and to be able to be on this stage ... where I can take care of them for the rest of my life and change the culture of my family, change the narrative, it's definitely huge for me."