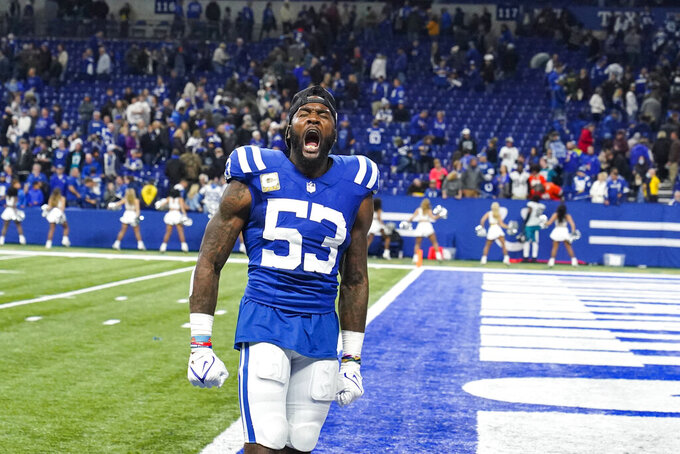 Indianapolis Colts outside linebacker Darius Leonard (53) celebrates after a 23-17 win over the Jacksonville Jaguars in an NFL football game in Indianapolis, Sunday, Nov. 14, 2021. (AP Photo/Darron Cummings)

BETTING LINE: Buffalo by 7, according to FanDuel SportsBook.

AGAINST THE SPREAD: Buffalo 6-3; Indianapolis 6-4.

TURNOVER DIFFERENTIAL: Colts plus-11; Bills plus-14.

COLTS PLAYER TO WATCH: DT DeForest Buckner. While the Colts are facing the NFL’s top-ranked defense, they’re also contending with a top-five offense. Buckner, a 2020 All-Pro, believes he can become Defensive Player of the Year. To do so, he needs to shine in these match-ups. He’ll be right in the middle of this one, trying to plug running lanes and apply inside pressure on Bills QB Josh Allen.

BILLS PLAYER TO WATCH: RB Matt Breida. Active for just the third time this season, Breida provided the Bills' sputtering running attack a spark with three carries for 28 yards and a touchdown, and three catches for 22 yards and a TD while playing just eight snaps. Curious to see if the offseason free-agent addition earns more playing time in place of Devin Singletary and Zack Moss.

KEY MATCHUP: RB Jonathan Taylor vs. Bills D. Taylor has topped 100 yards from scrimmage and scored a touchdown in each of his past seven games. It's the NFL's third-longest streak, behind Lydell Mitchell and LaDainian Tomlinson, who each had eight-game runs. Taylor combined for just 84 yards from scrimmage (78 rushing) in the playoff loss at Buffalo in January. The Bills have held seven of nine opponents under 80 yards rushing this season.

KEY INJURIES: Colts' three-time All-Pro LG Quenton Nelson and two-time All-Pro LB Darius Leonard both left last week’s game briefly with ankle injuries. Nelson practiced Wednesday while Leonard did not. Both are likely to play. The bigger question is whether starting CB Xavier Rhodes (calf) returns to after sitting out against Jacksonville. He did limited work Wednesday. ... Bills starting MLB Tremaine Edmunds’ status is uncertain after missing this past week’s game with a hamstring injury. DT Star Lotulelei landed on the COVID-19 list last Sunday, leaving his status uncertain. Starting RT Spencer Brown was placed on the COVID-19 list on Thursday. WR Cole Beasley’s practice and playing time have been limited over the past two weeks due to a nagging rib injury.

SERIES NOTES: Since snapping a six-game losing streak, the Bills have won four of six, with each of the wins coming at Orchard Park, New York. ... The Colts haven’t won at Buffalo since a 17-14 victory on Nov. 23, 2003.

STATS AND STUFF: Colts coach Frank Reich served as Hall of Fame quarterback Jim Kelly’s backup during Buffalo’s run to win four consecutive AFC championships in the early 1990s. He’s best known for rallying the Bills from a 35-3 third-quarter deficit in a 41-38 overtime win against the Houston Oilers in an AFC wild-card playoff on Jan. 3, 1993. Known simply as “The Comeback,” the 32-point deficit remains the largest a team has overcome in NFL regular season and playoff history. ... Indy has won four of five to reach .500 for the first time this season. ... Taylor needs 1 yard to take over the NFL’s rushing lead ahead of injured Derrick Henry. ... QB Carson Wentz has thrown multiple TD passes six times this season, tied for third most in the league. ... Leonard needs 11 tackles to reach 500 in his four-year career. He’s tied for fifth in the league with four takeaways in 2021. ... Indy leads the league in points off takeaways (77). Buffalo is second at 74. ... The Bills haven’t won consecutive games since a four-game run from Weeks 2-5. ... WR Stefon Diggs’ 162 yards receiving against the Jets last week were the fifth most in his seven-year career, and most in 28 games, including playoffs, with Buffalo. ... Allen improved his career record to 16-5 when attempting 29 or fewer passes after going 21 of 28 for 366 yards and two touchdowns with an interception against the Jets. ... Allen improved to 17-16 (including playoffs) when committing a turnover. ... All five members of Buffalo’s starting secondary had a takeaway against the Jets, including safety Micah Hyde forcing and recovering a fumble. ... In six wins, the Bills have forced 22 takeaways, including 14 interceptions, 15 sacks, and limited opponents to converting 4 of 12 fourth-down situations. In three losses, the Bills have an interception and a forced fumble, four sacks while allowing opponents to convert all three fourth-down situations.

FANTASY TIP: Don’t expect the Colts to defend Diggs with single-man coverage as the Jets did last weekend, which would lead to Allen eyeing other targets such as WR Emmanuel Sanders or TE Dawson Knox.