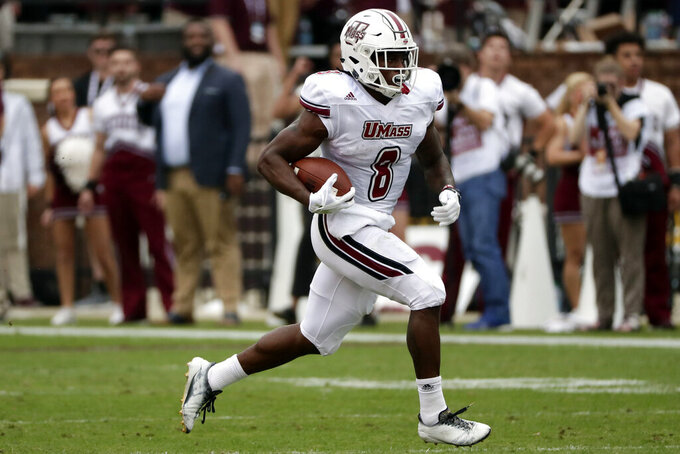 FILE - In this Nov. 4, 2017, file photo, Massachusetts running back Marquis Young (8) runs upfield against Mississippi State defenders in the first half of an NCAA college football game in Starkville, Miss. Marlon Mack looks around the Indianapolis Colts locker room and sees the nameplates changing on a continual basis. On Monday, Aug. 19, the names of Charcandrick West and Marquis Young appeared in running back row. On Tuesday, James Williams joined the group amid an injury rash that has decimated the Colts’ backfield depth. (AP Photo/Rogelio V. Solis, File)

On Monday, Charcandrick West and Marquis Young went up on running back row. On Tuesday, James Williams joined the group. And more changes could be coming amid an injury rash that has decimated the Colts' backfield depth.

At least the clear leader of the group, Mack, is healthy after battling injuries each of his first two seasons.

He rushed for 358 yards playing behind Frank Gore as a rookie, when he missed two games. Last season with Gore in Miami, Mack won the starting job over two draft picks and finished with 908 yards and nine touchdowns despite missing four games.

If he becomes a 16-game workhorse in 2019, a 1,000-yard season not only seems feasible but likely given the Colts' goal of producing a top-five rushing offense.

But behind Mack there are concerns.

Nyheim Hines, listed second on the depth chart, survived a big collision on a punt return Saturday that left him flat on his back. He later explained he had the wind knocked out of him, and was golfing Monday.

The other backs haven't been nearly as fortunate.

A foot injury has kept Jordan Wilkins, Indy's No. 3 option, out of action since July 30. He's still listed as week to week.

Jonathan Williams, fourth on the depth chart, broke a rib in the first half of Saturday's loss to Cleveland and there's no timetable for his return. D'Onta Foreman, whom the Colts claimed off waivers from Houston two weeks ago, went on injured reserve with a torn bicep muscle and will likely miss the entire season after taking only seven snaps Saturday. Spencer Ware, signed during the offseason, remains on the physically unable to perform list.

Naturally, general manager Chris Ballard has been busy looking for replacements. He re-signed undrafted rookie Aca'Cedric Ware on Aug. 7 before this week's flurry.

"We need to get that position right," coach Frank Reich said. "We need to have some depth. We need to figure out and see how everything is going to unfold with the other injuries — with Jordan and with Jonathan — and just need to make sure that we are ready to go."

It's taken a toll on the Colts' rushing productivity. Through two preseason games, Indy is averaging 89.0 yards per game and 3.7 yards per carry. Those numbers might not improve much this weekend with Reich announcing Wednesday most of the Colts' starters won't play against Chicago.

And with so many moving parts, Mack and Hines suddenly find themselves playing new roles: mentoring the three newcomers, who are scrambling to learn the playbook and figure out how where they fit in the offense.

"With the teaching, it's OK," Hines said. "We have so many details in the offense, we're giving ourselves pointers and reminders, too."

Starting quarterback Andrew Luck continues rehabbing from a lower left leg injury, which has kept him out of all but three practices since January.

Inside the locker room nobody is panicking.

"Maybe to the outside it looks that bad," Kelly said. "But once you dissect it and go in there and break the film down, if something doesn't go perfectly right it's usually because one or two assignments are blown, and in the grand scheme of things on the offensive line, those are big plays."

But the revolving door of running backs also has opened a window of opportunity for the newcomers.

If Wilkins and Williams aren't back for the Sept. 8 season opener against the Los Angeles Chargers, Ward, Williams or Young could extend to 21 the Colts' league-high streak of consecutive seasons with an undrafted rookie on the opening day roster.

"It's greater than it was," Ware said when asked how the injuries have helped his odds. "All I have to do is get out there and show them I can play on this level and take advantage of those opportunities."