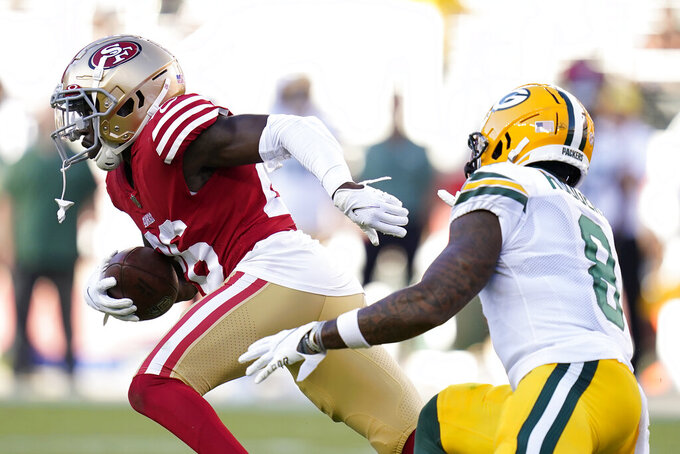 SANTA CLARA, Calif. (AP) — As stout as the San Francisco 49ers were defensively last season when that unit helped carry the team to the NFC title game, there was one glaring weakness on that side of the ball.

The Niners struggled to take the ball away with interceptions with the most glaring example coming in the NFC championship game when Jaquiski Tartt dropped one in the fourth quarter against the Rams that could have helped seal a trip to the Super Bowl.

Since the start of training camp this summer, those missed chances and dropped interceptions have turned into takeaways with the improved San Francisco secondary showing off ball-hawking skills in practice and the first two exhibition games.

“You thirst for them every year. But sometimes when they come, they come and right now they’re raining,” cornerback Emmanuel Moseley said Monday. “We just have to catch the ones that are thrown to you and get the difficult ones. That’s what we’ve been doing. I just hope they keep coming.”

Moseley got one of three for the defense in practice on Monday in his return to action after being sidelined a couple of weeks with a hamstring injury. He also deflected a pass from Trey Lance that Talanoa Hufanga intercepted with linebacker Fred Warner getting the third.

That comes after San Francisco had three interceptions in the exhibition opener against Green Bay and two more on Saturday against Minnesota.

That's a far cry from the nine the Niners had last year, which was tied for the fifth fewest in the league.

“Honestly, it hasn’t been stressed much of what we did last year, because to me, it doesn’t matter,” defensive coordinator DeMeco Ryans said. “What we did last year, we had a different group of guys out there. Last year is last year. How good can we be as the 2022 Niners defense? That’s where we are challenging ourselves each and every day. ... Can we go get the ball more than we did the last practice than the last game we played? That’s our challenge to us this year.”

The Niners have an improved secondary this season after being so decimated by injuries in 2021 that they had to throw in rookies before they were ready and sign guys off the street.

San Francisco's biggest free-agent addition this year was cornerback Charvarius Ward, whose aggressive approach in coverage has set the tone.

That has taken pressure off Moseley, who was in and out of the lineup the past two seasons because of injuries.

Rookie slot cornerback Samuel Womack has also been impressive with two interceptions in his exhibition debut.

“I think it’s definitely the the best since I’ve been here,” said defensive lineman Arik Armstead, who is entering his eighth season in San Francisco. “Those guys can can compete with the best of them in man and zone coverage. They’re challenging guys and making it tough. And we’re going against arguably the best receiving corps in the league, too, day in, day out. So I think those guys are making each other better.”

NOTES: Armstead participated in team drills at practice for the first time since injuring his knee on the first day of training camp. ... The Niners signed S Tashaun Gipson Sr. to a one-year deal for depth with starter Jimmie Ward (hamstring) out and backup Dontae Johnson (ribs) working his way back from an injury. ... DE Nick Bosa did not practice for undisclosed reasons. ... WR Austin Mack was waived after injuring his hamstring at Minnesota.