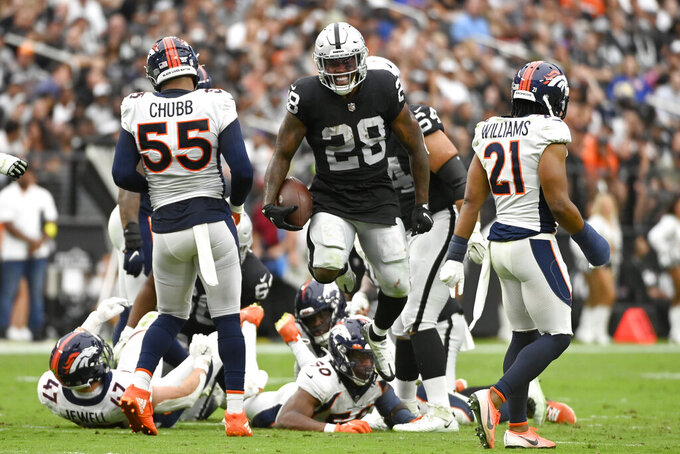 Las Vegas Raiders running back Josh Jacobs (28) celebrates a first down against the Denver Broncos during the first half of an NFL football game, Sunday, Oct. 2, 2022, in Las Vegas. (AP Photo/David Becker)

LAS VEGAS (AP) — Just when it looked as if the Las Vegas Raiders might blow another fourth-quarter lead, they put the ball in the hands of Josh Jacobs and the running game to finish off the Denver Broncos.

The emphatic game-sealing drive gave Josh McDaniels his first win as a head coach since being fired by Denver in 2010 and backed up the message he gave his players all week.

“He said it to the offense and defense: You should want the burden to finish the game, not hoping that someone else does their thing or they they fix the problem,” quarterback Derek Carr said. “Whatever the game asked for, it’s our turn to do our job.”

The Raiders did just that. Jacobs ran for a career-high 144 yards and two touchdowns, Amik Robertson returned a fumble 68 yards for a score and the Raiders beat the Broncos 32-23 on Sunday.

After opening their first season under McDaniels by losing three straight one-score games, including a blown 20-point lead to Arizona in Week 2, the Raiders (1-3) managed to do enough on the ground and on defense to hold off Russell Wilson and the Broncos (2-2).

“We kind of had the mindset we wanted this to be a physical game and leaned on Josh and the running game a little bit more than what we have and really established that,” McDaniels said. “Our goal was to try to make it that kind of game and make it a fourth-quarter game.”

Maxx Crosby had two of Las Vegas' three sacks, and Robertson had the game-changing play late in the first half as Denver repeatedly failed to take advantage of good field position.

After getting a 5-yard TD pass from Wilson to Courtland Sutton to cap a 34-yard drive in the first quarter, the Broncos turned three other chances with prime field position into one field goal and the fumble by Melvin Gordon III that Robertson returned for the touchdown.

Wilson had his most efficient game of his short tenure in Denver, completing 17 of 25 passes for 237 yards and two TDs. He also ran for a 3-yard TD that cut the Raiders' lead to 25-23 after completing a 55-yard pass to KJ Hamler.

But Denver scored only once on six drives in the second half.

“We have to get better,” first-year coach Nathaniel Hackett said. “Across the board as an offense, I think we will.”

Jacobs put it away with a 7-yard TD run with 2:01 to play. He became the first Raiders player to rush for at least 130 yards and two TDs in a game since Darren McFadden did it in 2011 against the Jets.

“We had to go down there and call game,” Crosby said. “Josh Jacobs is a damn baller. That’s been my brother since day one. I’m so happy for him. He went down there and closed the game.”

Carr didn't have to do much for the Raiders, completing 21 of 34 passes for 188 yards as Las Vegas got the running game going for the first time this season. Davante Adams had nine catches for 101 yards.

Jacobs scored on a 10-yard run in the second quarter and set up a field goal in the third with a 42-yard run that was his longest since his rookie season in 2019.

The Raiders finished with 212 yards rushing for their most in a game since getting 218 against the Broncos in 2016.

The Raiders' defense got into the scoring mode for a change when Duron Harmon forced Gordon's fumble and Robertson took it to the end zone.

It was the first TD by the Raiders' defense or special teams since Erik Harris had a pick-6 against the Chargers on Nov. 7, 2019. The 43 regular season games without one was the second longest of the Super Bowl era, trailing only a 49-game streak by the Browns from 1979-82.

The play came shortly after Broncos receiver Jerry Jeudy motioned at the 5-foot-8 Robertson that he was too short to cover him.

“Once he started talking, it kind of elevated my play,” Robertson said.

Both teams had their issues on special teams with Tyron Johnson botching a punt return that backed the Raiders up near their goal line in the first quarter.

Both teams also missed extra points in the second quarter with Daniel Carlson missing his first kick of any kind this season for the Raiders and Denver's Brandon McManus missing his second in the past two seasons.

Broncos: RB Javonte Williams and edge rusher Randy Gregory both left the game with knee injuries in the second half and will have MRIs to determine the severity. ... S P.J. Locke and LB Aaron Patrick left the game with concussions.

Raiders: LB Denzel Perryman left with a concussion in the first first half.