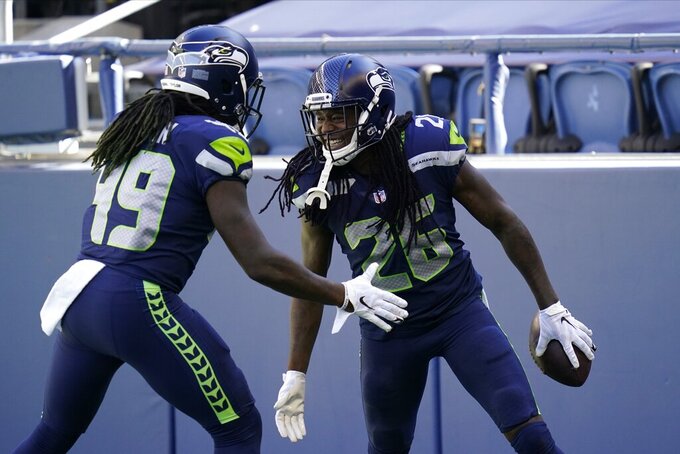 FILE - In this Sept. 27, 2020, file photo, Seattle Seahawks cornerback Shaquill Griffin (26) is greeted by his twin brother, outside linebacker Shaquem Griffin (49), after Shaquill Griffin intercepted a Dallas Cowboys pass during the first half of an NFL football game in Seattle. Shaquill Griffin is returning to the Sunshine State. He could be bringing his twin brother with him. A person familiar with negotiations says Griffin and the Jacksonville Jaguars agreed on a three-year contract worth up to $44.5 million that includes $29 million guaranteed. (AP Photo/Elaine Thompson, File)

The Jacksonville Jaguars officially welcomed a dozen new players Wednesday, including two veteran receivers and enough defenders to start revamping one of the worst units in franchise history.

Coach Urban Meyer addressed nearly every position he said he wanted to leading into free agency. Although Jacksonville didn't land any of the biggest names on the market, the Jaguars added at least four surefire starters and important depth that was missing during last year's 1-15 season that led to the firing of general manager Dave Caldwell and coach Doug Marrone.

The Jaguars also formally announced a trade with New Orleans for defensive tackle Malcom Brown, a 2015 first-round draft pick by New England. The Jaguars gave up a 2021 seventh-round pick to acquire Brown, according to a person familiar with details of the trade. The person spoke on condition of anonymity Wednesday because neither side has released compensation terms.

Brown has 247 tackles and 11 1/2 sacks in six years with New England and New Orleans.

That's seven new defenders — Griffin, Jenkins, Robertson-Harris and Brown are the most significant additions and expected to start right away — to go along with re-signing defensive end Dawuane Smoot (two years, $14 million) and cornerbacks Sidney Jones and Tre Herndon.

Jacksonville ranked last in nearly every defensive category in 2020 and allowed a franchise-record 30.75 points a game.

New coordinator Joe Cullen and linebackers coach/assistant head coach Charlie Strong are tasked with fixing that side of the ball. They are expected to switch to a 3-4 scheme.

Jacksonville parted with a number of defenders who no longer fit, including cornerbacks Quenton Meeks, Rashaan Melvin and Josh Nurse, and defensive tackles Dontavius Russell, Al Woods and Gabe Wright. Melvin and Woods signed one-year deals last year and then opted out because of the coronavirus pandemic.

There were fewer free-agent additions on offense, partly because Meyer expects to return as many as eight starters on that side.

Meyer failed to revamp the tight end room as planned, although he added run-blocking specialist Chris Manhertz (two years, $7.25 million). He brought in two experienced receivers — Marvin Jones (two years, $14.5 million) and Phillip Dorsett — to mix with a group that includes a pair of second-round draft picks in DJ Chark and Laviska Shenault.

Jones should be an immediate help to Clemson quarterback Trevor Lawrence, the presumptive No. 1 pick in next month's draft. Jones has 423 catches for 6,025 yards and 51 touchdowns, including 32 the last four years with Detroit.