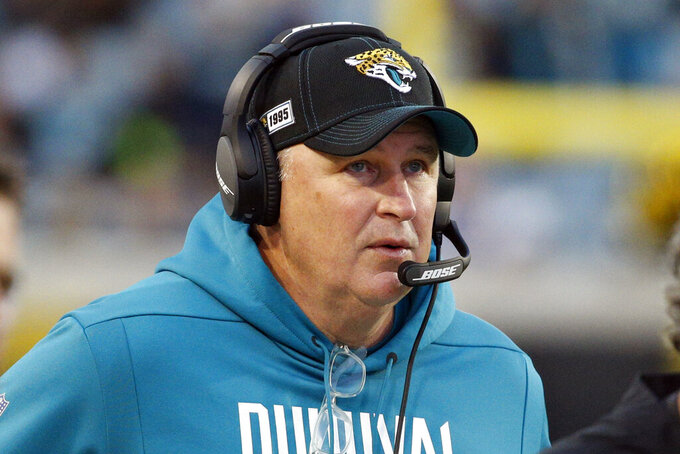 FILE - Jacksonville Jaguars head coach Doug Marrone watches his team against the Los Angeles Chargers during the first half of an NFL football game in Jacksonville, Fla., in this Sunday, Dec. 8, 2019, file photo. The Jaguars have fired coach Doug Marrone a little more than 12 hours after ending the season with a 15th consecutive loss. It was a move many thought owner Shad Khan should have made at the end of 2019. The Jaguars canceled Marrone’s season-ending news conference scheduled for Monday, Jan. 4, 2021. (AP Photo/Stephen B. Morton, File)

Shad Khan has hired coaches and general managers before. He relied on a search firm the first time. He enlisted help from a consultant the second. He listened to friends, family, colleagues and even competitors along the way.

Now, after nine NFL seasons and little success on the field, the Jacksonville Jaguars owner is taking a more hands-on approach to fixing the franchise's most glaring problems.

Khan is handling the search for his next coach and general manager mostly alone, with some help from Jaguars President Mark Lamping.

“This time around, I think I have a much better sense myself,” Khan said Monday after firing coach Doug Marrone. “I’m the key decision maker.”

Khan plans to have the team's next power duo report directly to him, a structure he expects will keep him in the loop on major personnel decisions. Khan said he wants to maintain “roster control," a term he later clarified as “you don’t want players going in and out or contracts given until you’re aware of that.”

“It's not really who’s coming in, but to really have a rhythm, that everybody is aligned on who might be leaving the team and who might be coming in, at least for the immediate future,” he added. “Those are some of the nuances I want to make sure everybody is on board with, because I think it’s really important here that we don’t head off in the wrong direction with an imbalance in power, for the lack of a better word.”

Khan also made it clear finding a franchise quarterback — hello, Trevor Lawrence — is as important as hiring the right people to those key positions.

“What's evaded the history of the Jags really has been a franchise quarterback,” Khan said. "I think what’s unique is we have the ability now to make a choice and it’s going to define the franchise moving forward.”

Khan fired Marrone a little more than 12 hours after ending the season with a 15th consecutive loss. It was a move many thought he should have made a year earlier. But Khan gave Marrone another chance to make Jacksonville a playoff contender again.

Marrone came up well short of the owner’s expectations, making Khan’s decision easy and expected. It was the first time Marrone has been fired in three decades of coaching.

Marrone went 25-44 in four-plus seasons in Jacksonville, including 2-1 in the postseason. The Jaguars just missed the franchise’s first Super Bowl in 2017 and was mired near the bottom of the league since. Marrone lost 21 of his final 24 games, including 15 by double digits.

Khan hopes to fill both spots "about the same time" and wants the replacements to know each other ahead of time in hopes off creating a better working dynamic. He already interviewed former Houston executive Rick Smith, current ESPN analyst Louis Riddick, and former New York Giants GM Jerry Reese for the GM position.

Three-time national champion Urban Meyer is considered a leading coaching candidate if he decides to leave Fox Sports and return to the sideline. Meyer won college football titles at Florida (2006, '08) and Ohio State (2014).

“Obviously, I’ve known Urban over the years through the Big Ten and what have you, but we have not spoken to anyone about this job or obviously interviewed him," Khan said. "This is something I just made the decision this morning and I’ll leave it at that.”

Despite Jacksonville’s recent struggles, both jobs are generally considered among the most attractive ones open. The Jaguars have five of the first 65 picks in the 2021 draft, including the overall No. 1 selection, and nearly $100 million in salary cap space to help rebuild.

“I certainly think there’s a huge amount of interest, much more so than the last time around,” Khan said.

Clemson's star quarterback Lawrence is considered a slam dunk to land in Jacksonville and serve as the centerpiece of the team’s latest rebuild.

Truth be told, Marrone didn’t have enough talent to turn things around in 2020. Of course, that was partly his own fault.

Marrone and Caldwell were given the chance to fix everything personnel chief Tom Coughlin ruined in his second tenure in small-market Jacksonville. But they somehow made aspects of the operation worse.

“We did have team disarray and we were in, to use the word ‘salary cap hell,’" Khan said. “We had serious issues with the team. Who better to help clean it up than (the ones) who were part of that, (those who) really created the mess, and that would include me?”

Jacksonville parted ways with several key starters and went young on defense. It didn’t help that quarterback Gardner Minshew failed to mask any of the team’s deficiencies. After going 6-6 as a rookie in 2019, Minshew was exposed as opponents essentially dared the sixth-round draft pick to beat them from the pocket.

So now Jacksonville is back where it’s been for the better part of the past two decades: in desperate need of a franchise quarterback and starting over.