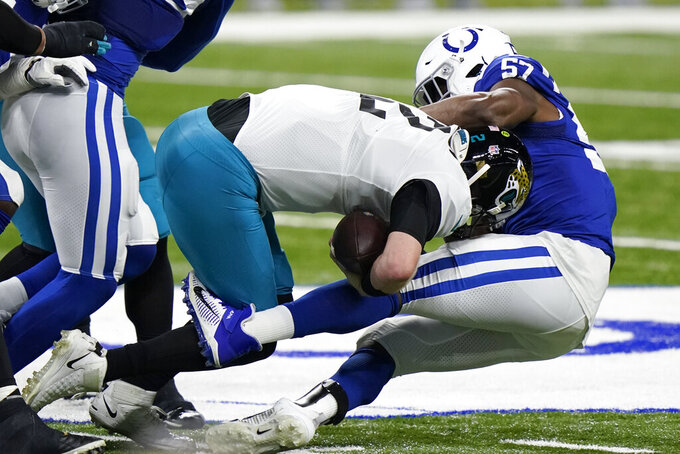 When Doug Marrone saw a report about Urban Meyer preparing to become Jacksonville's next coach, he immediately picked up the phone and called Jaguars owner Shad Khan.

“He said it was news to him and he would talk to me on Monday,” Marrone said following the team's 15th consecutive loss Sunday, a 28-14 finale at Indianapolis to close out the season.

Nonetheless, Marrone is bracing — maybe even expecting — to be fired as soon as Monday. He has a meeting scheduled with Khan.

“I think when the record is what it is, you have to be able to expect those things," Marrone said. "But like I said before, I asked about it. It was like new news for us. We'll see what happens.”

Marrone came up well short of the owner’s winning expectations this season. He dropped to 24-43 in four seasons in Jacksonville, falling a few plays shy of the franchise’s first Super Bowl in 2017 and then miring near the bottom of the league since. The Jaguars (1-15) have lost 21 of Marrone’s last 24 games, including 15 by double digits.

“The way I look at it is this way: First of all, the first thing that really comes to my mind is obviously my family,” Marrone said. “The second thing comes to the coaches and players. I don't ever want to be a distraction to them. As far as myself, I've been very fortunate and been gifted with great opportunities. I know who I am as a coach, but I know I'm not going to make excuses.”

NFL Network reported Saturday that Meyer, a three-time national championship winner at the college level with Florida and Ohio State, is anticipating getting the Jacksonville job and is already working on assembling a staff.

Despite Jacksonville’s recent struggles, the GM spot and a potential head coaching vacancy are considered the most attractive ones open around the league. The Jaguars have five of the first 65 picks in the 2021 NFL draft, including the overall No. 1 selection, and nearly $100 million in salary cap space to help rebuild.

Clemson star quarterback Trevor Lawrence is considered a slam dunk to land in Jacksonville and serve as the centerpiece of the team’s long-term future.

In the meantime, journeyman Mike Glennon got the start in the season finale and completed 26 of 42 passes for 261 yards. He threw two touchdowns to rookie Laviska Shenault and lost a fumble on one of the six times he was sacked. Half of them came after Jacksonville trailed 20-0 in the second quarter.

It was likely Glennon's final game with Jacksonville; he signed a one-year deal in March. He will attend Marrone's team meeting scheduled for early Monday and then hit the road. Marrone might be right behind him.

“Doug is a great guy. He really does a good job," Glennon said. "What they decide, I don't know. That's just how this business works. We all appreciate what he's done for us and we'll see what happens.”