Jaguars set sights on Lawrence after years of failure at QB 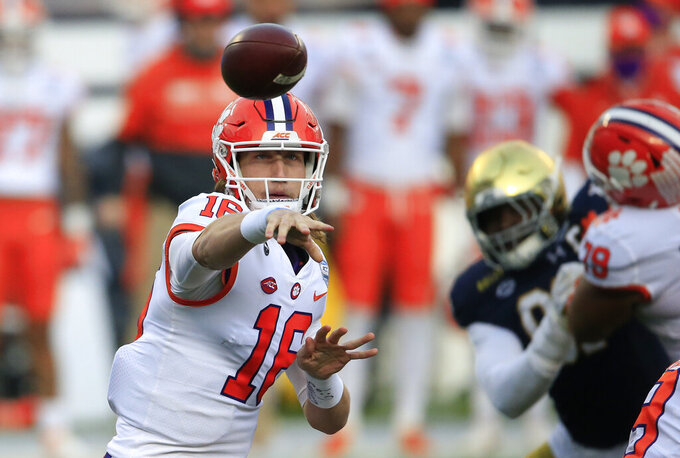 FILE - In this Saturday, Dec. 19, 2020, file photo, Clemson quarterback Trevor Lawrence (16) throws to an open receiver during the first half of the Atlantic Coast Conference championship NCAA college football game against Notre Dame in Charlotte, N.C. Lawrence has been named a finalist for the Heisman Trophy. The Heisman will be awarded Jan. 5 during a virtual ceremony as the pandemic forced the cancellation of the usual trip to New York that for the presentation that usually comes with being a finalist. (AP Photo/Brian Blanco, File)

JACKSONVILLE, Fla. (AP) — The Jacksonville Jaguars have botched the quarterback position repeatedly over the past two decades.

Different owners, different general managers and different head coaches have made similar mistakes at the all-important spot, whether in the draft, in free agency or simply in deciding which guy to put on the field.

The franchise is finally, at least seemingly, in a can’t-mess-this-up situation. The Jaguars (1-14) locked up the No. 1 pick in the 2021 NFL draft Sunday, gaining a stronghold on Clemson star quarterback Trevor Lawrence the same day they set a team record for futility. Jaguars fans in every section of the stadium celebrated a 41-17 debacle to Chicago — the team’s 14th straight loss — and partied more in parking lots as the New York Jets won for the second straight week, a streak that essentially gifted the top choice to Jacksonville.

The only thing standing in the way of the small-market team drafting Lawrence is the junior’s decision to turn pro. He said before Clemson’s opener that he was planning on this being his final season and even took part in the team’s senior day ceremony in late November.

In the meantime, here’s a look at the floundering franchise’s most egregious errors at quarterback:

—Extending Blake Bortles: Anyone who had watched Bortles play regularly knew he wasn’t the guy. But personnel chief Tom Coughlin and general manager Dave Caldwell still gave the flawed QB a three-year, $54 million extension following the 2017 season. He was released a year later.

—Drafting Blaine Gabbert: Jacksonville traded up six spots to grab Gabbert in the 2011 draft, a move that stunned then-coach Jack Del Rio. Gabbert lost 22 of 27 starts in Jacksonville before getting traded to San Francisco.

—Passing on Patrick Mahomes and Deshaun Watson: Coughlin could have started his second stint in Jacksonville by bailing on Bortles and taking either Mahomes or Watson in 2017. Instead, he selected running back Leonard Fournette at No. 4.

—Drafting Bortles: Caldwell raised eyebrows by choosing Bortles at No. 3 in 2014. He was far from a can’t-miss prospect coming out of UCF.

—Rolling with Gardner Minshew: The Jaguars had 12 draft picks, including an extra first-rounder in 2020, and probably could have made a move up to land Justin Herbert. Instead, they stuck with Minshew, who was essentially benched twice this season.

—Paying David Garrard: After upsetting Pittsburgh in the 2007 playoffs, Jacksonville gave Garrard a six-year, $60 million contract. He threw 53 touchdown passes and 38 interceptions over the next three years and was sacked 117 times.

—Drafting Byron Leftwich: Jacksonville rushed to select Leftwich with the seventh pick after Minnesota and Baltimore failed to execute a trade that would have sent the Marshall quarterback to the Ravens. The Jags likely would have “settled” for Terrell Suggs.

—Releasing Garrard: This was just awkward. Jacksonville cut Garrard days before the 2011 season opener and shortly after he was introduced as the team’s starting quarterback at a kickoff luncheon. The Jags had decided to go with Luke McCown and Gabbert.

No one expects Lawrence to join the dubious list. He's a no-brainer, a slam-dunk pick and could be a game changer for the floundering franchise.

Jacksonville has two first-round draft picks, including one from trading cornerback Jalen Ramsey to the Los Angeles Rams, and needs a No. 1 receiver as well as lots of defensive help. The Jaguars have allowed at least 24 points in 14 consecutive games, an NFL record.

Middle linebacker Joe Schobert has 132 tackles, including 2 ½ sacks, and three interceptions in his first season in Jacksonville. He signed a five-year, $53.75 million contract in free agency and will be a building block for the next regime.

Quarterback Mike Glennon has two touchdowns and six turnovers in his last 10 quarters. Coach Doug Marrone declined to announce a starter Monday for the finale.

Running back James Robinson (ankle) will try to return for the season finale. He needs 35 yards to break the NFL record for rushing yards by an undrafted rookie.

16 — the jersey number Lawrence is expected to wear in Jacksonville.

The Jaguars are simply counting down the days until the draft.