Jefferson soaring for Vikings with Cowboys set to visit 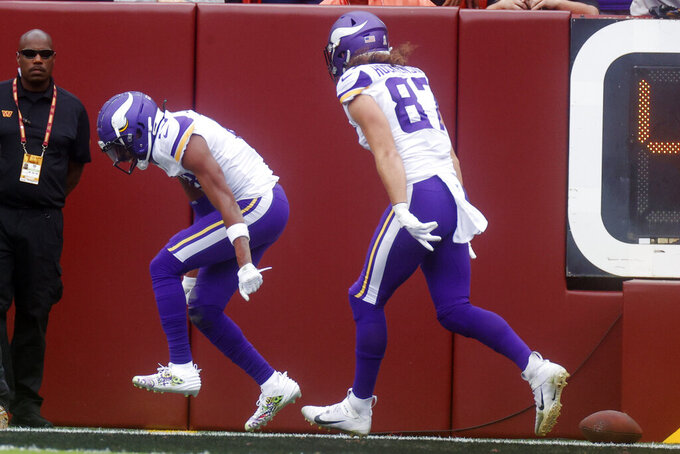 Minnesota Vikings wide receiver Justin Jefferson (18) celebrates his touchdown during the first half of a NFL football game between the Washington Commanders and the Minnesota Vikings on Sunday, Nov. 6, 2022 in Landover, Md. (Shaban Athuman/Richmond Times-Dispatch via AP)

MINNEAPOLIS (AP) — Without even a split-second of hesitation, Kirk Cousins can hone in on the exact moment when he knew the Minnesota Vikings had their latest game-changing wide receiver in Justin Jefferson.

The lanky first-round draft pick from LSU was just a rookie in 2020, making his first career start in Week 3 against Tennessee when he ran a deep route up the left sideline on third down. Jefferson twisted his body to complete a jumping catch in tight coverage of a slightly underthrown ball as he landed flat on his back to set the Vikings up for a touchdown on the next play.

Befitting his nickname “Jet,” Jefferson has only taken off from there.

The 23-year-old's portfolio of highlight-reel receptions added a new feature clip last week when he unfathomably grabbed a fourth-and-18 pass from Cousins by leaping backward, securing the ball with one hand and winning a brief wrestle for possession with the defender in Buffalo.

The Pro Football Hall of Fame requested the gloves and sleeve Jefferson wore for that game, which the Vikings (8-1) went on to beat the Bills in overtime for their seventh straight victory.

“Hopefully my name can get in there a couple years later," Jefferson said, recounting the numerous conversations with relatives, friends, teammates, coaches and others he's had about the catch.

Jefferson couldn't have created a better start for a Canton-bound career. With 4,076 receiving yards in 42 games, he needs only 88 more to pass Hall of Fame member Randy Moss for the most in a player's first three seasons. Moss had 4,163 receiving yards in 48 games.

Second on that list? Odell Beckham Jr. with 4,122. Guess who Jefferson talked to on the bus from the stadium to the airport in Buffalo? Yes, he actually had Beckham on the other line, a pal of his through their LSU connection and the owner of the most recent “greatest catch of all time” when he made his famous one-handed touchdown grab in 2015 for the New York Giants. They talked during the week before the game, too.

The only other player in the NFL last week with at least 10 receptions, 150 yards and a touchdown was CeeDee Lamb, whose production for Dallas ultimately went for naught in a 31-28 overtime loss at Green Bay. But the performance by Lamb, whose takeover this season for Amari Cooper as the team's true No. 1 wide receiver has been uneven amid another injury absence for quarterback Dak Prescott, was a promising one for the Cowboys. Dallas visits Minnesota Sunday.

“It was an excellent game based on numbers, but we both know there’s a little more out there for him,” coach Mike McCarthy said. “And he’s made of the right stuff, because he wants it."

Lamb, whose 2,743 receiving yards are second only to Jefferson among the stacked 2020 draft class, went to the Cowboys five picks out of Oklahoma before the Vikings got their guy to replace the traded Stefon Diggs. Lamb stood out right away as a rookie, too, including a one-handed catch of his own at Minnesota that year for a touchdown that helped the Cowboys beat the Vikings.

With the Dallas offense more sluggish than expected this season, there's been plenty of chatter about Beckham, who's recovering from a torn ACL, joining the Cowboys (6-3) for a playoff run.

“I’m a fan of Odell. Why wouldn’t you want to add more firepower to the offense?” Lamb said.

THE RUN D IN BIG D

The Cowboys have allowed at least 200 rushing yards in consecutive games. The only time they've done that more than twice in a row was the franchise’s expansion season of 1960, an 0-11-1 team that allowed four straight 200-plus games.

Defensive coordinator Dan Quinn, who has directed a remarkable turnaround for the group in 1½ seasons with Dallas, said he doesn’t remember such a two-game stretch in his coaching career.

The Cowboys, who are 29th in the NFL in rushing yards allowed, must fix the seemingly alternating issues of losing containment outside and ceding wide running lanes inside.

“One thing I do know: We have the right crew to do it,” Quinn said.

McCarthy made no secret of how much he wanted to beat the Packers in his return to Green Bay, four years after the Super Bowl 45-winning coach was fired. The outcome was made that much worse when the Cowboys lost when leading by at least 14 points entering the fourth quarter for the first time in franchise history out of 196 possible games, including the playoffs.

“Winning is such a joy, but unfortunately I think sometimes as you get older in this league it becomes a relief and I don’t like that,” McCarthy said. “The losing gets harder. There’s no question about that.”