Jets’ Bell playing some of ‘best football’ of career 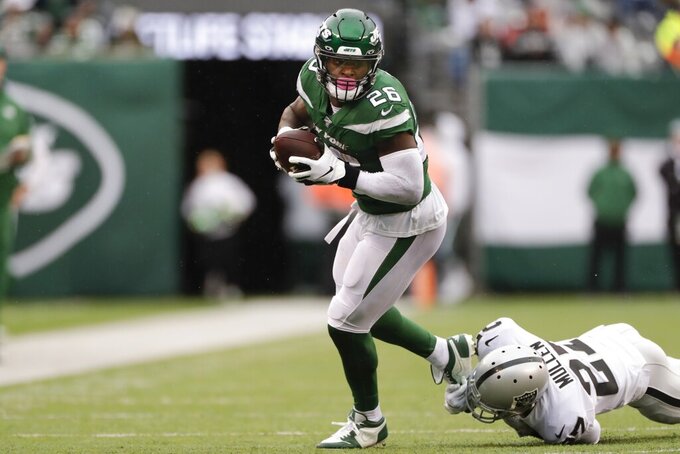 FLORHAM PARK, N.J. (AP) — Le’Veon Bell realizes his numbers might not be up to par with some of his previous eye-popping seasons.

The star running back refuses to judge his first 11 games with the New York Jets by any of that. There are other things that have him happy with the job he has done so far.

“I feel like I’ve been running hard, breaking a lot of tackles and I haven’t dropped a ball all year,” Bell said Friday. “I’ve been doing great in blitz pickups and pass protection. I haven’t been making a lot of mental mistakes and any time they call upon me, I make a play.

“This is some of the best football I’ve played in my whole career. I don’t care what the stats say.”

That’s a far cry from the guy who ran for more than 1,200 yards in three of the last four years he played before sitting out last season with Pittsburgh in a contract dispute.

“I feel good,” Bell said. “I’m just about winning games right now. I understand the game of football has its up and downs. As long as we win the games, I’m fine. The (big games) will come. I’m not rushing it. I’m not feeling bad about myself or anything. This is some of the best football I’ve ever played.”

The Jets’ entire offense — not just Bell — struggled for a good chunk of the season, particularly when quarterback Sam Darnold was sidelined three games with mononucleosis. The offensive line had several injuries and is only now beginning to jell.

There are signs now with the Jets scoring 30 or more points in each of the last three games, all wins, that Adam Gase’s offense is finally showing what it can do — Bell included.

“I think the last couple weeks, we've gotten him out, got him some space and got him the ball and let him go do his thing,” Gase said. “And I think that's worked out well.”

Bell has surpassed 100 yards from scrimmage three times this season, including in the Jets’ 34-3 win over Oakland last Sunday. He ran for 49 yards on 12 carries and caught five passes for 59 yards. Bell also remains a focal point on offense, even if the rushing totals aren’t there. He has 51 receptions for 368 yards and a score.

“We've been saying it since the offseason: Le'Veon is a great target for us, someone we can utilize in the pass game as well as the run game,” Darnold said. “So, we’re going to continue to use him a ton of different ways.”

Bell pointed out that he hasn’t even really played many snaps in the fourth quarter of the last two games.

“You can’t expect me to get 150 yards (rushing) and I’m not even playing the fourth quarter,” he said. “And that’s a good problem to have.”

On the first play from scrimmage against the Raiders, Bell went down the right sideline and Darnold threw into tight coverage. The running back reached up for the ball and managed to come down with for an impressive 23-yard reception. It set the tone for another solid outing by the offense.

“Yeah, that play solidifies what we already knew about Lev Bell,” Darnold said. “He's a really good player and he’s going to go out there and make plays for us.”

Bell also acknowledges he feels “way more in the flow” now in the offense. Next up are the winless Cincinnati Bengals, whose overall defense and run defense both rank last in the league.

And, with that, Bell could be on the verge of that elusive breakout.

“He’s able to move me around a little more because he knows I have a better understanding of the offense,” Bell said of Gase. “I’ve been putting good football on tape. He’s been finding different ways to utilize me besides just the run game, so hopefully we continue to grow with that.”