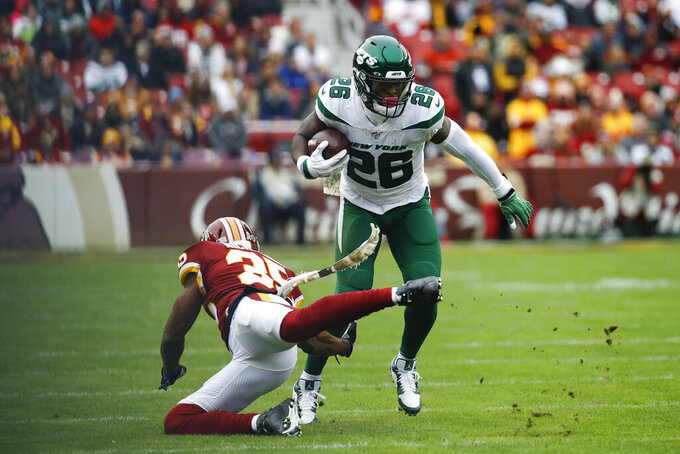 The New York Jets running back says Wednesday is upset he has been randomly selected five times this season by the league to take tests for performance-enhancing drugs.

“I done had 5 ‘random’ HGH blood test in 10 weeks,” Bell tweeted. “(at)NFL I’m not doing another after today, whatever y’all lookin for it obviously ain’t there.”

Bell doubled down on his Twitter comment after practice, saying it’s “getting weird” and reiterating that he will not take additional tests this season — although he stopped short of saying the league is “targeting” him with the testing.

“I’m not going to say all that,” Bell said in the locker room. “I’m just saying I’m not doing it no more. They’re not getting no more of my blood. They can use the blood they’ve got right now.”

The random drug testing is part of a collectively bargained policy between the NFL and NFL Players Association. An independent administrator determines via a computer program which players are tested each week.

“Is it random, though?” Bell said. “Why do I feel like every time they’re here doing the HGH testing, I get picked?”

Per NFL rules, players with no previous violations of the policy on performance enhancers won’t be tested more than six times in a calendar year.

“We’ve been playing the season for 10 weeks and I’ve been tested five times for HGH,” Bell said. “On average, it’s like once every two weeks, right? Every two weeks, you all been testing me and haven’t found nothing, so what are y’all looking for?

If Bell does get randomly selected for a sixth test over the last five weeks of the season and he refuses to take it, the league could consider it a failed test and choose to discipline him — with suspension a possibility.

Bell wrote on Twitter he’ll refuse to have the league “stick me” with “dirty” needles. He clarified that comment saying he simply dislikes needles, in general, and prefers urine testing.

“You want me to pee in a cup, I can do that all day,” he said. “Just, I ain't trying to do it with needles. Needles, you can get that away from me.”

Bell was suspended by the NFL for two games in 2014 while he was with Pittsburgh after he was charged with marijuana possession and DUI, a violation of the league’s substance abuse policy. He was also suspended four games in 2016 for missing a test.

He signed with the Jets last March after sitting out last season in a contract dispute with Pittsburgh. Bell made headlines this summer when he was forced to miss portions of training camp practices on consecutive days to take league-mandated tests.

Bell is off to the worst start of his career, averaging just 3.2 yards per carry. He has also yet to rush for more than 100 yards in a game this season. Bell is second on the team in receptions with 46 for 309 yards and one TD.