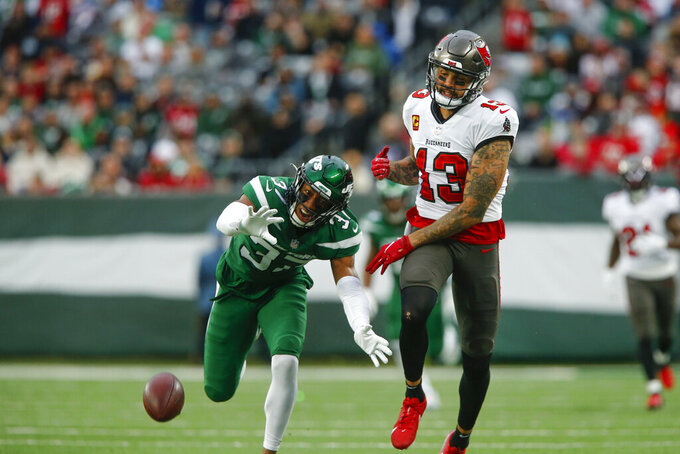 FILE - New York Jets' Bryce Hall, left, tries to get his hands on a ball intended for Tampa Bay Buccaneers' Mike Evans during the second half of an NFL football game, Sunday, Jan. 2, 2022, in East Rutherford, N.J. Hall begins his workout in his garage on a steamy July morning before heading to the gym for a few exercise and a high school field to do some football drills. The routine continues day after day in the Florida heat throughout the offseason. (AP Photo/John Munson, File)

LUTZ, Fla. (AP) — Bryce Hall begins his workout in his garage on a steamy July morning before heading to the gym for more exercises and a high school field for some football drills.

The routine continues day after day in the Florida heat for the New York Jets’ third-year cornerback.

“It’s really just about the big dreams and aspirations that we have to succeed,” Hall said on the AP Pro Football Podcast. “For the goals that we set, it only makes sense to do what I’m doing. So that’s just kind of what motivates me each and every day.”

Hall says “we” because he’s not out there alone. He brought in Cornell Jenkins from California to train him for 12 weeks. Jenkins, known as a sports physicist, said he studied physics at California State, Dominguez Hills, to “find an edge and become a better athlete.”

Jenkins’ mentor was Marv Marinovich, who was one of the NFL’s first strength and conditioning coaches for Al Davis’ Raiders. Marv’s son, Todd Marinovich, played quarterback at Southern California and was a first-round pick by the Raiders in 1991.

“I see a hunger,” Jenkins said about Hall’s work ethic. “The mission pulls him to work. He comes to work every day, starts early, stays late, doesn’t complain, doesn’t whine. He just puts his hard hat on and puts the work in. You give him little homework assignments and he gets them knocked out very fast, consistently. Every day is like the first day that he started working because he comes to work with this freshness, this passion. It’s refreshing seeing that and that keeps me motivated to always find creative ways to challenge him.”

Hall started every game last season, and showed plenty of potential. He was one of only 13 cornerbacks to play over 1,000 snaps in 2021. He ranked second in the NFL with 17 forced incompletions, including a league-best six inside the red zone.

Now, he has to prove himself again. Hall welcomes the competition.

“The mindset I try to take is you’re your own biggest competitor,” he said. “I’ve heard Deion (Sanders) say: ‘Your biggest competitor isn’t with the guys that come to work, it’s the part of you that has to wake up each morning and put in the work. It’s the part of you that doesn’t want to watch film, but you know you have to watch film. It’s the part of you that’s saying I want to eat this, eat that, and you know you’ve got to take care of your body.’ And so I think for me, how I approach things is, there’s so many things I can control. I really try not to worry about what everybody else is doing, but just try to be the best me and I feel like if I do that, everything is going to take care of itself.”

The 25-year-old Hall, a fifth-round pick from Virginia in 2020, is also willing to mentor other cornerbacks to help New York’s revamped secondary.

“I remember when I first got in the league, there were guys older than me starting ahead of me, but they had no ego in sharing with me the knowledge and information that they had,” he said. “And so I just kind of try to take the same approach."

Hall played primarily left cornerback over the first 10 games last season before shadowing the opponent’s top receiver the rest of the way. He allowed fewer receptions and his passer rating when targeted improved while facing the best receivers.

“I love the challenge of it,” Hall said. “Early on, my comfortability was being on one side. But then as we started to move to different sides, I started to get a lot more comfortable because you have the different footwork on each side. When I look and study the best to do it, they’ve all traveled. They all have moved to different sides."