Jets could set tone for season with stunning comeback win 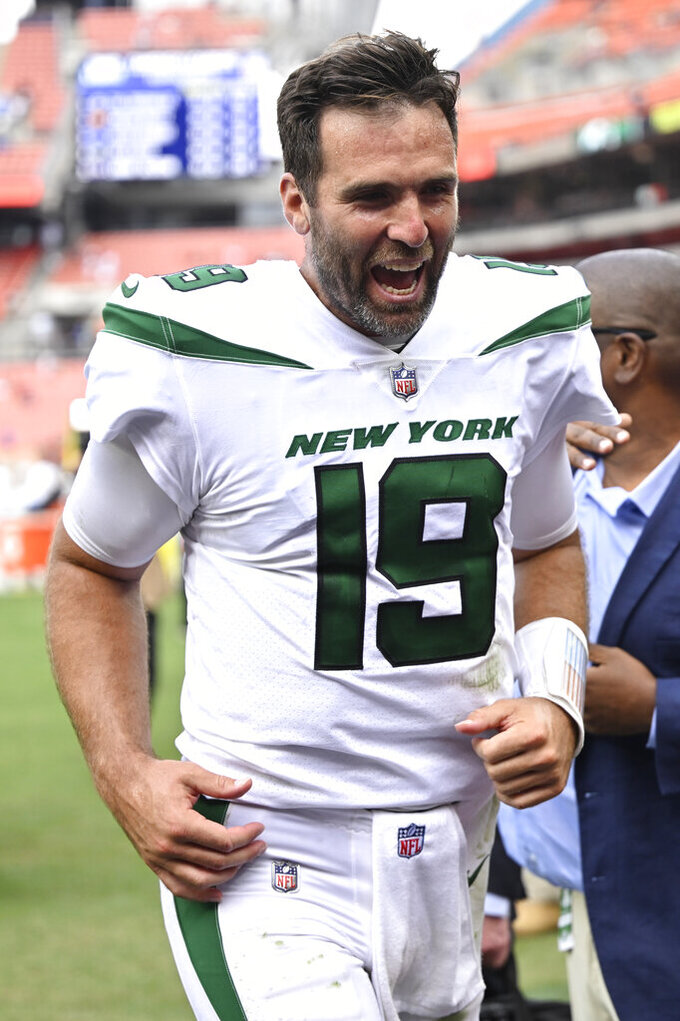 NEW YORK (AP) — Maybe Robert Saleh and the New York Jets were on to something.

A week ago, the coach made headlines when he boldly declared he and the team were “taking receipts” on all those who continuously mock the franchise. Things will change, he insisted, and they'll be happy to “shove it down everyone's throats” when it does.

Saleh's squad then went to Cleveland and pulled off one of the NFL's most stunning comebacks in decades. Down by 13 to the Browns on Sunday with 1:55 remaining, Joe Flacco and the Jets rallied to win 31-30.

“Something crazy, right?” a beaming Saleh asked as he walked into his postgame news conference.

It was the first time a team overcame a deficit of at least 13 points inside the final two minutes of regulation to win since Chicago overcame a 14-point deficit to also beat Cleveland in overtime in Week 8 of the 2001 season.

Saleh's decision to stick with Flacco was widely questioned after the 37-year-old quarterback was mediocre in the Jets' season-opening loss to Baltimore. It wasn't all Flacco, who was victimized by at least four dropped passes, shoddy protection and penalties. Fans chanted for Mike White to play — and followed that up during the week with calls to sports talk radio and posts on social media for him to step in, at least while Zach Wilson remains sidelined.

Saleh stuck with Flacco — and looked pretty smart Sunday. Flacco finished with 307 yards passing and four touchdowns, including the two in 60 seconds that were sandwiched around a successful onside kick.

“No," Saleh said when asked if he felt some vindication for his quarterback decision. "We have to win a hell of a lot more than one game to cash in on those.”

That's true. Overreactions — positive or negative — are never prudent on Mondays during the NFL season. But the Jets showed they could actually win a game like that. And that's not something many would have believed possible, at least during the past several years for the franchise with the league's longest postseason drought at 11 years.

It was a signature win for Saleh in his second year as coach, and a potential tone setter for the season. It was also a sign of hope for the Jets and their fans.

How they build on that unlikely victory will set the course for the rest of this season — and potentially beyond.

“Obviously, the jubilation, everyone is really excited,” Saleh said Monday, “but it’s time to move on.”

Don't look now, but the Flacco-led offense is actually doing some good things in Wilson's absence.

Entering Monday, the Jets' 782 total yards are sixth in the NFL, and their 34 passing first downs are one behind league leaders Cincinnati and Miami.

And despite that tough first game, Flacco hasn't been too shabby: Entering Monday, his 616 yards passing in the first two games rank him third in the NFL behind just Miami's Tua Tagovailoa (739) and Washington's Carson Wentz (650). He also leads the NFL in completions (63) and attempts (103).

All week, the Jets talked about setting the edge on defense to slow the Browns' 1-2 running back punch of Nick Chubb and Kareem Hunt.

The Browns finished with 184 yards rushing, with Chubb running for 87 yards and three TDs on 17 carries and Hunt gaining 58 yards on 13 attempts. Quarterback Jacoby Brissett got into the action, too, gaining 43 yards on six carries.

Garrett Wilson. The rookie wide receiver was the breakout star for the Jets, catching eight passes for 102 yards and two touchdowns — including the go-ahead 15-yard score with 22 seconds left.

The No. 10 overall pick also overcame a late mistake to make the game's biggest catch.

“I didn’t want my drop to be the reason why we lost the game,” he said.

Bryce Hall. The Jets' No. 1 cornerback last season was out of a starting gig after the Jets signed D.J. Reed in free agency and he lost a training camp competition with No. 4 overall pick Ahmad “Sauce” Gardner. Hall played as a backup in the opener, but was inactive for the game at Cleveland.

The Jets had no major injuries in the game. Wilson remains out, likely one more game, while recovering from a bone bruise and arthroscopic surgery to repair a torn meniscus in his right knee. Saleh confirmed Flacco will start again Sunday in place of Wilson, who the coach said will “take a step up” in practice this week. ... TE C.J. Uzomah, who missed the game with a hamstring injury, will be evaluated through the week.

13 — Not only did the Jets overcome a late 13-point deficit, but they snapped a 13-game losing streak in the month of September that dated to 2018.

If things truly are changing, the Jets need to prove it Sunday at home against the 0-2 Cincinnati Bengals — who they beat last season on Halloween in White's memorable breakout game.

“We’ve got to (gain momentum)," Saleh said after the win. "We have no choice. We have a Super Bowl runner-up coming in town this week — a dynamic offense, a really good defense. I’m sure they remember last year, so they’re going to come in guns blazing, and we’ve got to be able to answer it.”