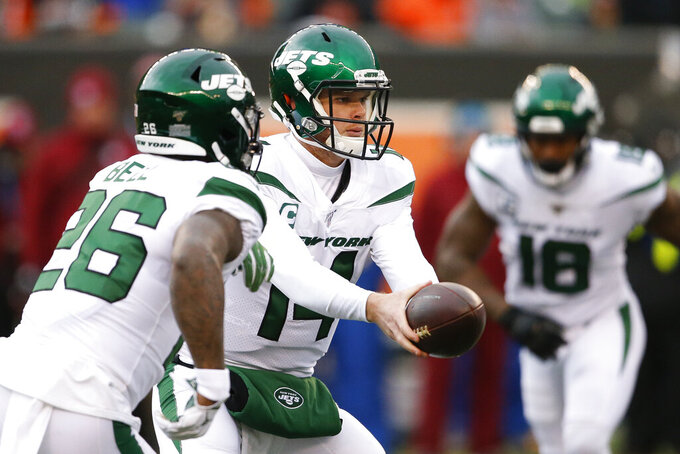 FILE - In this Dec. 1, 2019, file photo, New York Jets quarterback Sam Darnold (14) looks to hand off the ball to running back Le'Veon Bell (26) during the first half of an NFL football game against the Cincinnati Bengals in Cincinnati. When the Jets traded up in the draft to select him with the No. 3 overall pick in 2018, they envisioned Darnold as the franchise quarterback they have been searching for since, well, the glory days of Joe Namath. (AP Photo/Gary Landers, File)

NEW YORK (AP) — Sam Darnold has a different feeling about things this summer.

I's not just because of the unusual conditions around training camp caused by the coronavirus pandemic.

“There’s just so much more that I understand that I didn’t understand at this point last year,” the New York Jets quarterback said during a video call. “I have a ton more confidence in myself to be able to go out there and play consistent football, which is really what the game is about.”

Darnold is entering his third NFL season, and it's a big one. For him, and the entire organization.

When the Jets traded up in the draft to select him with the No. 3 overall pick in 2018, they envisioned Darnold as the franchise quarterback they have been searching for since, well, the glory days of Joe Namath. A few of New York's first-round signal callers have had tastes of success over the years — Richard Todd, Ken O'Brien, Chad Pennington and Mark Sanchez — but it was never consistent or sustained.

Darnold wants to be the one who, finally, bucks that trend. Adam Gase truly believes the 23-year-old quarterback is well on his way.

“I think Sam has a little bit of a different way about him,” the coach said. “There’s less learning for him. He does know this offense a lot better than when we started last year. I think he’s more detail oriented. He’s able to help a lot of the guys whether it’s up front, outside or in the backfield. I do think there’s a lot more confidence on his part."

During his first two seasons, Darnold showed flashes of terrific playmaking and a solid mental approach. He has also dealt with inconsistency on the field. Some of that can be attributed to having to learn a new offense each year, first under then-offensive coordinator Jeremy Bates as a rookie and then last season under Gase.

A bout with mononucleosis early last season slowed Darnold's development and it took some time for him to truly grow confident in Gase's playbook. The since-rebuilt offensive line was downright porous at times, and Gase's play calling was often inconsistent.

“Spending so much time with coach Gase, especially before last year, just trying to learn this offense as fast I could, it was definitely a process," Darnold said. "I spent hours and hours trying to learn it every single day and I’m still doing that. I’m still learning the offense, but I’m definitely comfortable teaching some of the young guys and the guys who haven’t been in this system before.

"I’m just really excited to get that rolling.”

The Jets are steadfast in their belief that he's the guy who'll lead their franchise for years to come. The solid closing stretch by Darnold and the team last season is the key piece of evidence they hang their helmets on.

Darnold helped lead the Jets to a 6-2 second half, an eight-week period in which he threw 13 touchdown passes and four interceptions.

“I'm just trying to work on continuing to learn the playbook,” he said, “and learn the protections, learn the root concepts where I’m going to go with the ball if 1, 2 and 3 is covered.”

With the trade of safety Jamal Adams last Saturday, there's no doubt Darnold is the face of the team and the overall leader. During virtual meetings over the last few months, Gase noticed something else different in his quarterback.

“His relationship with the defensive players,” the coach said. "I think he’s always done a good job of making sure he’s not just focused on one side of the ball. There’s a lot of good communication that goes on between him and defensive players as well.”

With teams taking precautions because of the pandemic, Darnold knows it's critical for him to remain healthy. So, he's sticking to a safe, unexciting game plan for the next several months.

“I’m just going to stay in my apartment and really just travel from there to here inside the building,” he said. “That’s going to be it for me. It might be boring, but that’s kind of what I have to do at this point.”

Darnold is the Jets' comfortable and confident communicator. Now, in a critical Year 3, the young quarterback needs to have it all come together on the field.

“I’m really excited to be part of this organization,” Darnold said. “I think we’re going in the right direction and we just have to continue to move forward."