Jets’ Darnold sacked criticisms by refusing to be affected 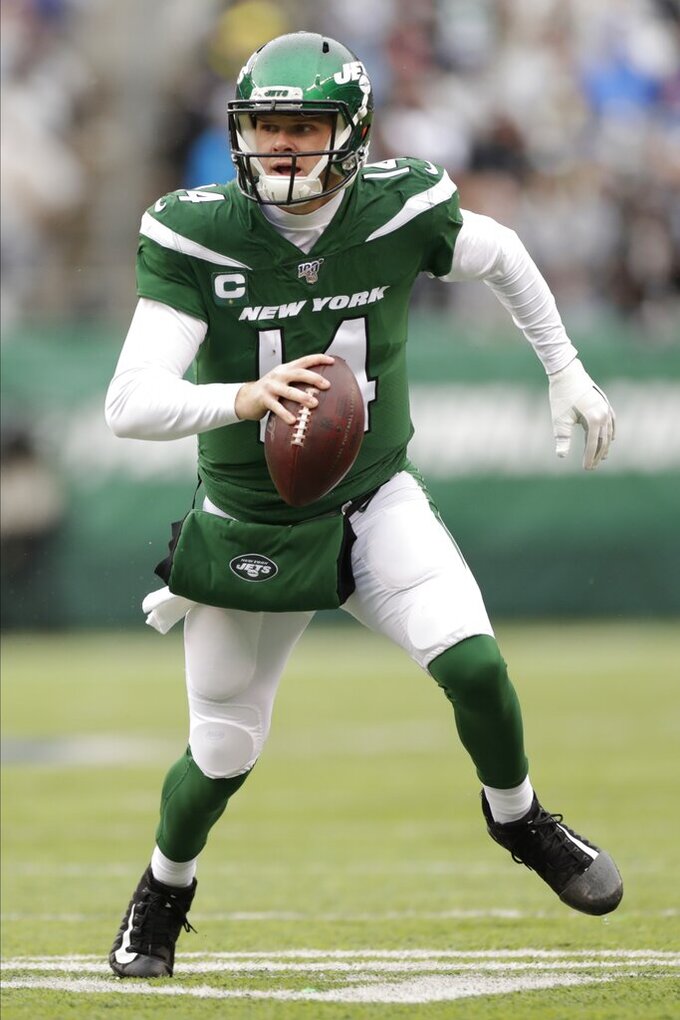 FLORHAM PARK, N.J. (AP) — Sam Darnold hears some of the harsh criticisms when he struggles and the glowing accolades when he’s playing well.

The New York Jets’ second-year quarterback refuses to be affected by any of it. Even though that’s much easier said than done.

“I think for me, everyone in here has a job to do and that’s it,” Darnold said of the media Wednesday. “That’s really the end of the story for me, is everybody’s got a job to do and everyone has to make their money.”

He stays off social media, for the most part, other than the occasional post on Instagram. He also isn’t scanning the internet for stories about him or tuning in when sports shows on TV or radio focus on him.

Darnold knows about it, though.

“Especially in this day and age, you can't avoid anything,” he said.

It has been a strange year for the 22-year-old Darnold, who entered the season with big-time expectations — from himself, as well as from fans and media.

After an up-and-down opening game, he was sidelined for three games with mononucleosis. Plenty was said about that, of course. And none of it good.

He made a successful return, throwing for 338 yards and two touchdowns in a win over Dallas. But, he then struggled in three straight losses, tossing eight interceptions and just three TDs — with the dreaded word “regression” being used to describe Darnold’s development.

The skid began with a 33-0 loss to New England, marked by the comment caught on national TV when Darnold said he was “seeing ghosts” against the Patriots defense. It was the “highlight” of the worst game of Darnold’s young career. He went 11 of 32 for 86 yards, throwing four interceptions and losing a fumble.

“It wasn't the game, obviously, that I wanted,” he said. “I just played terribly. It was embarrassing for me to go out there and play that way. Really, for me, the worst part was letting my teammates down and going out there and losing the football game. That was the worst part for me. I think just coming back to work the next week and continuing to try to get better, that's the way that I dealt with it and that's the way I'm going to continue to deal with games like that in the future.

“Hopefully, they don't come up, but it's just how the game goes sometimes.”

In the past three games — all victories, not coincidentally — Darnold has looked nothing like that struggling quarterback who appeared to have lost his way on the field with bad mechanics and decisions.

He has thrown seven touchdowns and just one interception while making decisions that have helped win ballgames.

“I just realized the kind of trust that my teammates had in me and the coaches had in me,” Darnold said, “because they didn't blink an eye.”

A big reason for this string of success is Darnold’s uncanny ability to move on quickly from failure.

Gase never felt the need to coddle Darnold, though. After his ugly performance against the Patriots, the quarterback refused to let his confidence be shaken.

“I thought he handled it really well, considering that was one of those games where you want to burn the tape,” Gase said. “You want that thing eliminated from your resume. So, the fact that he handled it as well as he did, I'm sure it wasn't easy. He never said anything to me. He just did a good job of putting his head down.”

After a 29-15 loss at Jacksonville the week after the Patriots game, Darnold huddled with Gase to chat about things he liked and disliked in the offense. Gase tweaked some things, and the offense has taken off since.

Darnold realizes people will always be talking about him — just as they did Monday when he made it onto the gossip pages of the New York Post for partying in Manhattan hours after the Jets’ 34-3 rout of Oakland on Sunday.

And, as with everything else, Darnold brushed it all off.