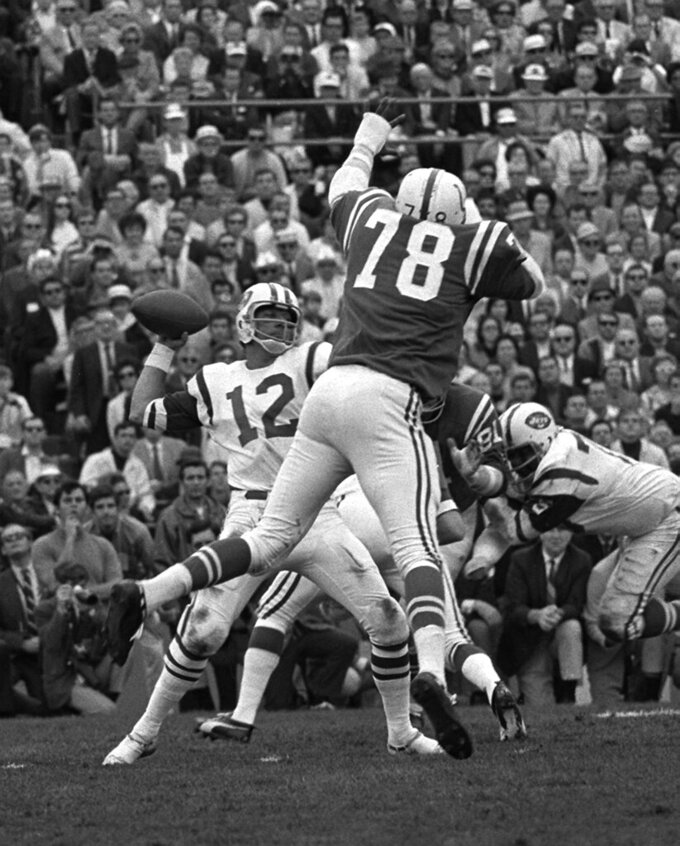 FILE - In this Jan. 12, 1969, file photo, Bubba Smith (78) of the Baltimore Colts leaps in a vain attempt to block a pass from New York Jets quarterback Joe Namath in Super Bowl III in Miami, Fla. The Jets won 16-7. Broadway Joe was the No. 1 overall pick in the AFL draft in 1965 and went on to deliver the franchise its only Super Bowl victory - and still its only appearance in the big game. (AP Photo/File)

NEW YORK (AP) — BEST FIRST-ROUND DRAFT PICK: QB Joe Namath. Who else? Broadway Joe was the No. 1 overall pick in the AFL draft in 1965 and went on to deliver the franchise its only Super Bowl victory — and still its only appearance in the big game. (RB Freeman McNeil — No. 3, 1982 — comes in a distant second).

BEST SECOND-ROUND DRAFT PICK: DE Mark Gastineau. This is a tough one between the sack dancing-Gastineau (1979) and sure-handed WR Wesley Walker (1977), but one of the league's most colorful and feared pass rushers gets the slight nod. The two-time NFL sacks leader was a dominant force in his prime and held the league's single-season record for sacks (22 in 1984) until Michael Strahan broke it 17 years later.

BEST LATE-ROUND DRAFT PICK: DL Joe Klecko. The sixth-rounder out of Temple in 1977 is one of the most popular and best all-around players in franchise history. Klecko was a key part of the team's "New York Sack Exchange” with Gastineau in the 1980s and is still the only player in NFL history to be selected a Pro Bowl starter at three positions: defensive end, defensive tackle and nose tackle.

WORST SECOND-ROUND DRAFT PICK: QB Christian Hackenberg. The second round has been a rough one historically for the Jets, especially in recent years — WR Devin Smith (2015), TE Jace Amaro (2014), QB Geno Smith (2013), WR Stephen Hill (2012), G Vladimir Ducasse (2010) — but Hackenberg (2016) is the pick here. The choice by then-GM Mike Maccagnan was widely criticized at the time, and looks even worse now: Hackenberg is already out of the league without ever having taken a regular-season snap.

BEST DRAFT TRADE: Then-GM Mike Tannenbaum traded up in the 2007 draft to take cornerback Darrelle Revis, who became one of the franchise's greatest players and one of the league's best at his position. New York sent the No. 25 overall pick, along with a second-rounder and a fifth-rounder, to move up to No. 14. The Jets also got a sixth-rounder in the deal, which they later packaged with other picks to get Green Bay's second-rounder — who ended up being longtime linebacker David Harris — and a seventh-rounder (wide receiver Chansi Stuckey).

WORST DRAFT TRADE: New York gave up the 13th and 20th overall picks to San Francisco in 1980 to get the No. 2 selection. The Jets took Jones instead of offensive tackle Anthony Munoz, who went third overall to Cincinnati and ended up in the Pro Football Hall of Fame. Wide receiver Art Monk, another eventual Hall of Famer, lasted until the 18th pick.

DID YOU KNOW THEY ONCE DRAFTED?: Former U.S. Congressman J.C. Watts. The Oklahoma star quarterback was an eighth-round pick by the Jets in 1981 as a defensive back. Watts instead opted for the Canadian Football League, which gave him the opportunity to play quarterback until his retirement from football in 1986. His political career began in 1994, when he successfully ran for Congress, and he was re-elected to three more terms.