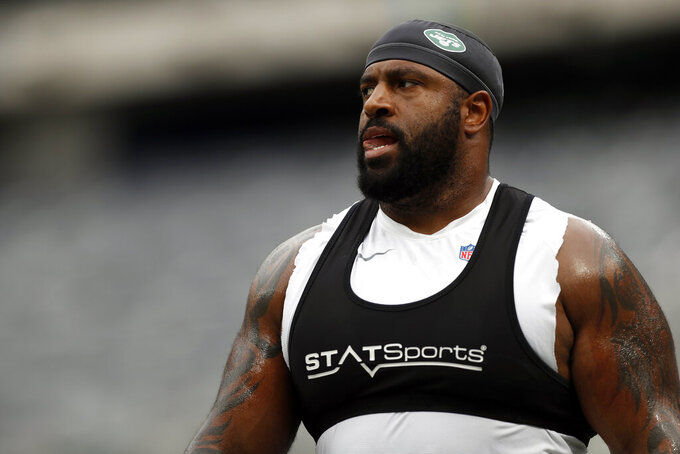 FILE - New York Jets offensive tackle Duane Brown (71) warms up before an NFL football game against the Cincinnati Bengals, on Sept. 25, 2022, in East Rutherford, N.J. Brown's debut with the Jets could come Sunday against the Miami Dolphins. The 37-year-old left tackle has been on injured reserve since injuring a shoulder at practice last month. (AP Photo/Steve Luciano, File)

The 37-year-old left tackle was signed during training camp, but has been on injured reserve since injuring a shoulder at practice last month. Brown was cleared to practice this week, starting the 21-day window during which the Jets can either activate him or place him on season-ending IR.

Coach Robert Saleh said Friday that Brown would be a game-time decision. But Brown was even more optimistic.

“Everything's been good,” Brown said after practice. "As of now, I'd imagine I'd be good to go, so far.”

The Jets need to activate Brown from IR by 4 p.m. Saturday to clear him to play against the Dolphins. Saleh said Brown came out of Thursday's padded practice feeling good.

“He’s being evaluated today and tomorrow just to see how it works out,” Saleh said before practice Friday. “Obviously, the load today will be a little bit less than yesterday, but we’ll see how it goes for the next couple of days.”

Brown's return would be a big boost for the Jets, who have had to reshuffle their line over the last several weeks.

“It's exciting,” Brown said of his impending return. “This game is everything to me. I came here with high expectations for myself and what I could contribute to the team and being sidelined the first four games was tough. So the chance to get back and do my thing, be out there with the guys, it means everything to me.”

Right guard Alijah Vera-Tucker made a surprise start at left tackle last week. If Brown is back at left tackle Sunday, Vera-Tucker could slide back to right guard or perhaps play right tackle — one of just two O-line spots, including center, at which the second-year lineman has not yet started.

Backup Conor McDermott could also get the call at right tackle, or recently signed Cedric Ogbuehi or veteran Mike Remmers, who's currently on the practice squad.

Brown, in his 15th NFL season, said it was difficult watching from the sideline knowing he couldn't yet contribute as the Jets were dealing with so many offensive line issues.

“I don't have a history of missing games, especially at the start of the season,” said Brown, who was out just one game the past two seasons while with Seattle. "You're trying to integrate yourself into a new team, gain everyone's respect and to get sidelined, it's tough, in more ways than one.

“Credit to the locker room. They really supported me a lot throughout the process, the coaching staff supported me and the training staff, everyone getting me to the point where I feel confident to get back and contribute.”

Brown said he spent the time while sidelined working out and staying in shape, and also attended meetings and learned the playbook.

“Getting back to practice, I felt pretty good, my legs felt good,” said the seven-time Pro Bowl selection. “So, good to go.”

Brown said the Jets’ injury situation on the offensive line didn’t necessarily accelerate his return to the field.

“No, I didn’t want to wait any more days,” he said. “Credit to the line — everyone shuffling around, guys stepping in and contributing, they made the pressure not as hard to try to get back immediately.

"But I had the mindset, as soon as that four weeks was up, to be able to come back."

NOTES: QB Zach Wilson (ankle) and RB Breece Hall (knee) were both removed from the injury report and fully practiced. ... LB Marcell Harris (neck) is questionable, but was a full participant in practice.