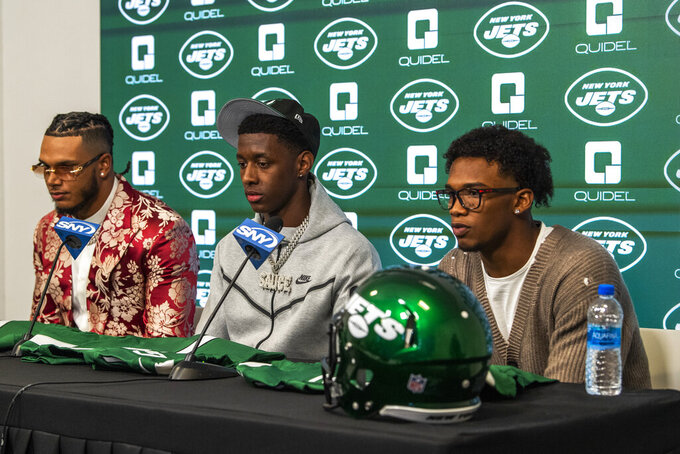 Another round of high-fives and hugs followed 45 minutes later. And again after a few more hours.

General manager Joe Douglas and the Jets were active early, drafting three players in the first round — the type of opening round the franchise hadn't seen since their four-player haul in 2000. They added two more playmakers Friday, and some depth Saturday.

New York's draft was completed before the fourth round was finished. But the Jets were understandably giddy about their seven new additions.

This was considered a crucial draft for Douglas in his third full offseason overseeing things, as well as for the Jets, who are looking to end the NFL's longest active postseason drought at 11 seasons.

There were plenty of needs for a team that went 4-13 last season in coach Robert Saleh's first year, with cornerback, wide receiver and edge rusher among the top priorities.

First came cornerback Ahmad “Sauce” Gardner of Cincinnati at No. 4 overall, considered by many to be the best college player at his position. While the Jets signed D.J. Reed in free agency to be their top cornerback, they now have two players who could assume that role.

Then, Douglas got aggressive and traded back into the first round to snag Florida State defensive end Jermaine Johnson.

“I feel like all three of these guys can help (quarterback) Zach (Wilson) in different ways," Douglas said, “whether it’s helping him on the field on offense or getting the ball back to him as quick as possible.”

Same for Friday, when the Jets traded up again and took Iowa State running back Breece Hall in the second round. They selected Ohio State tight end Jeremy Ruckert in the third.

“I think the biggest thing we did was add quality depth, add quality players to this team,” Douglas said.

Gardner was a big hit at the draft site in Las Vegas with his sparkly “SAUCE” medallion and diamond-encrusted sauce bottle pendant. But it was his standout play on the field that got him there.

Gardner didn't allow a touchdown in his three-year college career. Sure, he gave up some plays, but he tried to keep them to a minimum.

“It’s just a tribute to putting the work in, the unseen work, required hours,” he said. “Just making sure I practice to be consistent because I know nobody is perfect and that’s just what came with it.”

The addition of Gardner would seem to be particularly important to the Jets in the AFC East, which has some new playmakers in the division rivals' passing games.

Miami traded for Tyreek Hill to team with Jaylen Waddle, New England acquired DeVante Parker and Buffalo already had one of the best QB-WR combinations with Josh Allen and Stefon Diggs.

The Jets offense looks much improved, at least on paper, than the unit that struggled for a good chunk of last season.

New York re-signed wide receiver Braxton Berrios and running back Tevin Coleman, and signed tight ends C.J. Uzomah and Tyler Conklin in free agency. Garrett Wilson — a legitimate deep threat — should team with Berrios, Corey Davis and Elijah Moore to open things up downfield — a solid receiving unit despite the Jets not getting Hill or Deebo Samuel in a trade.

The addition of Hall to the backfield could be a draft move that makes an immediate impact. His skillset should be a terrific fit in offensive coordinator Mike LaFleur’s scheme, and Hall could complement Michael Carter in one of the most exciting — and elusive — backfields the Jets have had in years.

“Part of the goal,” Douglas said, “was to add some guys that when they touch the ball, they can take it 80 (yards).”

Clemons was considered by some to be a sleeper among defensive ends and his drop to the fourth round was precipitated in part by his age — he's 24 — along with some injuries in college and some off-field issues.

He was arrested twice in a three-month span last year, according to reports, with unlawful possession of a weapon, driving with an invalid license and possessing a small amount of marijuana among the charges.

“That’s not who I am," Clemons said. "That’s not what my character shows. That’s in the past and I’ve learned from it.”

Douglas said they “felt comfortable” about drafting him after doing their background work on Clemons — and that Clemons won't repeat his mistakes.