Jets hit bye week with no wins, lots of questions for future 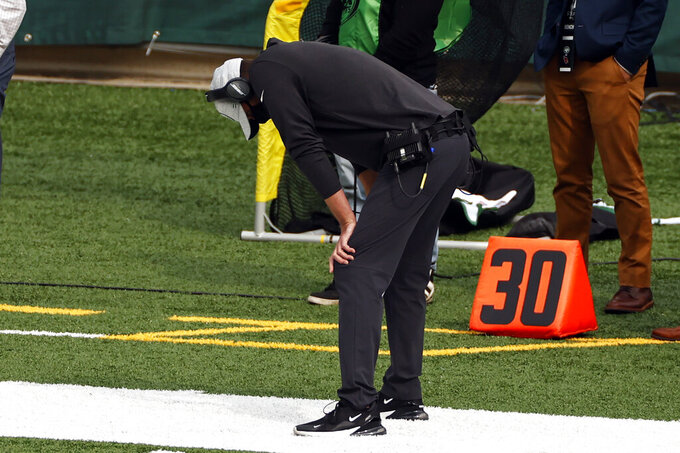 New York Jets head coach Adam Gase reacts during an NFL football game against the Arizona Cardinals, Sunday, Oct. 11, 2020, in East Rutherford, N.J. From the unbeaten Steelers at the top to the winless Jets at the bottom, predictability has taken a hike halfway through NFL 2020. (AP Photo/Adam Hunger)

NEW YORK (AP) — The rest of this lost season is about next season — and beyond — for the winless New York Jets.

They've already set embarrassing franchise history with the team's first 0-9 start. And with the games dwindling, pulling off just one victory might become a tougher task by the week.

That makes going 0-16, something only two other NFL teams have done, a distinct possibility.

“These guys keep coming back to work” coach Adam Gase said after the Jets' 30-27 loss Monday night to New England. "They keep trying to find ways to get better. They keep trying to execute what is being asked of them. They played their (butts) off.

“We’re not finding ways to win.”

That likely ultimately will cost Gase his job after this season, although general manager Joe Douglas said last week he sees him as part of the solution to turning the franchise around.

Gase was an unpopular pick among fans less than two years ago when he was hired to replace the fired Todd Bowles. He has gone 7-18, and his expected innovative approach on offense — the reason team chairman and CEO Christopher Johnson chose him — has been nonexistent.

“We have to do a better job in all aspects of what we’re doing as far as developing our young players, getting our guys out on the field, getting these guys back from injury as fast as possible,” Gase said. “This is everybody; this is our staff, this is the coaching staff. We have to do a better job of the players that we do have, of making sure that we’re improving them, we’re getting the most out of everybody we have.”

The Jets are last in several key offensive categories. Injuries and inconsistency have been major factors, including quarterback Sam Darnold in both aspects. But Gase has done little to show he can help Darnold take the next step in his development. And, with the Jets in position to pick No. 1 in the draft, Darnold's days — along with Gase's — could be numbered.

Darnold is dealing with a shoulder injury that has sidelined him for three games and complicated the evaluation process. Truth is, if the Jets finish with the top pick and Clemson quarterback Trevor Lawrence is available, Douglas might have no choice — no matter how well Darnold performs the rest of the way, if he's healthy enough to play.

“It doesn’t matter where we’re at in the season," Darnold said. "For me personally, it’s just about going out there and playing ball with my guys and with my teammates. So, that’s really all I’m thinking about, trying to get on the field as quickly as possible, but at the same time being smart about it.”

Douglas already began working on the future by collecting draft picks in deals over the last few months in which he traded the likes of Jamal Adams, Steve McLendon, Avery Williamson and Jordan Willis. The roster renovation included the release of Le'Veon Bell, whose stint with the Jets was disappointing.

While next year's salary cap is still to be determined, the Jets are projected to have plenty of money to spend in free agency. They also have 18 draft picks over the next two years, with nine of them in the first three rounds.

So help is coming. Even if the wins aren't right now.

“Part of what we’ve done is try to put ourselves in better financial health moving forward,” Douglas said. “I think we’re on our way to doing that. But ultimately, I think when you look at successful organizations, no matter what the sport, you don’t see a lot of teams that build long-term success by buying their way out of it. You see the teams, the organizations, that have long-term success, they draft well, and they develop their players.

A glimpse of the future came Monday night when the Jets used 10 rookies. That includes draft picks who are already foundational pieces in left tackle Mekhi Becton, wide receiver Denzel Mims and punter Braden Mann, with safety Ashtyn Davis, running back La'Mical Perine, cornerback Bryce Hall and defensive ends Jabari Zuniga and Bryce Huff all expected to get increased snaps down the stretch.

“These guys are getting a ton of playing time now," Gase said, "and that’s going to work to our benefit in the long run.”

And that's what the Jets will be focused on the last seven games of this season: Who will be part of the future by making a mark now?