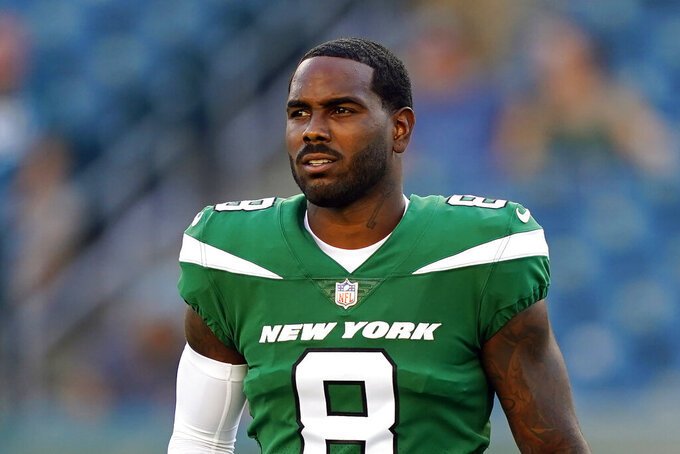 Disgruntled wide receiver Elijah Moore returned to practice with the New York Jets and is expected to play Sunday against New England after requesting to be traded last week.

Moore, in his second season, has been disappointed in the lack of pass-catching opportunities he has had during the Jets' surprising 5-2 start. He was held out from practice last Thursday and Friday and didn't travel with the team to Denver, where New York won its fourth straight on Sunday, 16-9.

“We’ve had talks,” coach Robert Saleh said Wednesday. “He’s good. We’re all good. He just needs to go out and do what he does and see if we can get him the ball and make a few plays.”

Moore worked out with team trainers over the weekend, checked back in with the team Monday and practiced Wednesday. Saleh was seen chatting with Moore during warmups, and offensive coordinator Mike LaFleur greeted the wide receiver with a hand slap and a hug.

The second-round pick out of Mississippi caught 43 passes for 538 yards and five touchdowns in 11 games as a rookie, but has just 16 catches for 203 yards and no scores in six games this season.

Things came to a head last week after the Jets' 27-10 victory at Green Bay when he quote-tweeted a reporter’s post that pointed out he had no official receiving targets in the game. He actually had one on a deep incompletion in the second quarter, but it was negated by a penalty.

In a series of since-deleted tweets, Moore posted if he said what he really wanted to, he'd be viewed as selfish, but added: "Just know I don’t understand either.”

Things took a turn when he reportedly had a disagreement with LaFleur on Thursday and was sent home to clear his head. Saleh said at that time it was a personal matter he was attending to with family. Later that night, Moore requested to be traded.

Saleh said last Friday “trading him is not an option,” and he has reiterated a few times since that Moore remains a valued member of the team.

“The question of whether he's locked in in meetings and doing what he needs to do in practice, that's like a non-question to me. He's going to be fine.”

But, Saleh was asked, does Moore still want to be traded?