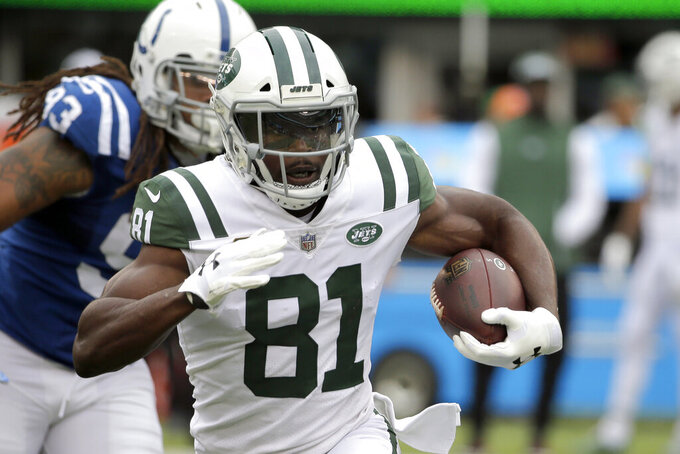 FILE - This Oct. 14, 2018, file photo shows New York Jets wide receiver Quincy Enunwa (81) running with the ball against the Indianapolis Colts during the first half of an NFL football game, in East Rutherford, N.J. A person with direct knowledge of the decision says the New York Jets are placing wide receivers Quincy Enunwa and Josh Bellamy on the reserve/physically unable to perform list. The moves Tuesday, May 5, 2020 effectively end each of the player's seasons with the Jets, four months before the season opener is scheduled. (AP Photo/Seth Wenig, File)

NEW YORK (AP) — Quincy Enunwa's playing career with the New York Jets is likely over after he and fellow wide receiver Josh Bellamy were placed on the reserve/physically unable to perform list.

The moves Tuesday effectively end each of the player's seasons with the Jets, four months before the opener is scheduled.

Enunwa missed all but one game last season with a serious neck injury, his second in three seasons. Bellamy was sidelined the last nine games with a shoulder injury, prematurely ending his first year in New York.

Enunwa's $6 million salary for this season is fully guaranteed, and it would cost the Jets $11.4 million in dead money on the salary cap if he's released now. He's due $7.8 million next year, with $4.1 million guaranteed for injury.

Enunwa, who turns 28 on May 31, and has been one of New York’s most popular players — when healthy — over the past several seasons for his tough, physical approach to the wide receiver position. But staying on the field has been an issue for him the past few years.

Enunwa, a sixth-round pick out of Nebraska in 2014, has played in just 12 games over the past three seasons because of injuries. After a breakout year in 2016 during which he set career highs with 58 catches, 857 yards and four touchdowns, Enunwa hurt his neck during a scrimmage in training camp and needed season-ending surgery to repair bulging disks.

He bounced back in 2018 and was healthy most of the season, catching 38 passes for 449 yards and one touchdown. Enunwa was viewed as a building block by then-general manager Mike Maccagnan, who signed the receiver to a four-year, $33.4 million contract extension that would keep him with the Jets through the 2022 season.

But, Enunwa injured his neck again in last season’s opener against Buffalo and missed the rest of the year.

His future with the Jets became even more uncertain in November, when he criticized the team during a Twitter rant. He said the Jets fined him $27,900 for missing two rehabilitation treatments, including one during which he took his wife, who is a military veteran, out to celebrate on Veterans Day. Enunwa also said at the time that doctors told him he had a 50% chance of resuming his playing career because of the neck injuries.

A day after last season ended, Enunwa said he was told he has spinal stenosis. He added that he didn’t need surgery this time around and remained hopeful he would resume his playing career.

“Do I expect to play? I would love to play,” Enunwa said. “It’s just about how well I heal up and then we’ll take it from there.”

Enunwa has 119 career receptions for 1,617 yards and five touchdowns in 41 games.

Bellamy, who turns 31 on May 18 played in just seven games last season after signing a two-year, $5 million deal with New York in the offseason.

While playing predominantly on special teams, Bellamy finished with two catches for 20 yards before being placed on injured reserve with his injured shoulder.

He's scheduled to make $2.25 million this season. Bellamy has 78 career catches for 1,019 yards and five touchdowns in parts of eight NFL seasons with Kansas City, Washington, Chicago and the Jets.

Brown spent much of last season on New York's practice squad but played in three games, including one start, before being placed on injured reserve for the final three games with a quadriceps injury.

Moore and Tapper spent all last year on the reserve/non-football injury list. Hatcher was signed to the practice squad for the final two games of the season.