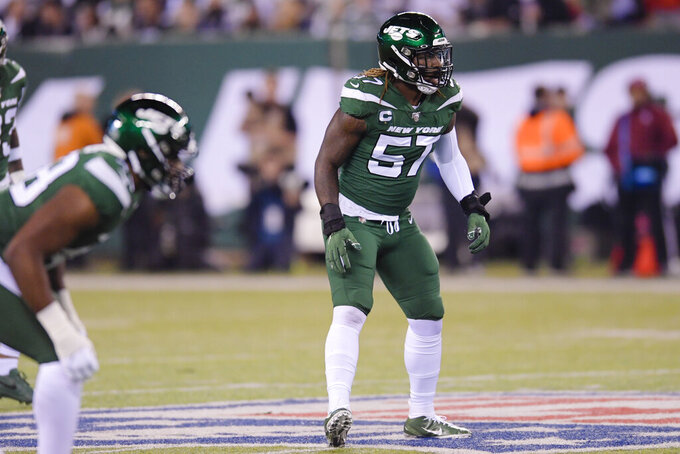 FILE - In this Monday, Oct. 21, 2019 file photo, New York Jets inside linebacker C.J. Mosley (57) plays during the first half of an NFL football game against the New England Patriots , in East Rutherford, N.J. C.J. Mosley’s injury-shortened first season with the Jets is officially over. The star linebacker was placed on injured reserve Tuesday, Dec. 3, 2019 after playing in just two games because of a severe groin injury suffered in New York’s season-opening loss to Buffalo. (AP Photo/Bill Kostroun, File)

The star linebacker was placed on injured reserve Tuesday after playing in just two games because of a severe groin injury suffered in New York’s season-opening loss to Buffalo.

Jets coach Adam Gase said during his weekly spot on “The Michael Kay Show” on 98.7 ESPN New York that Mosley will have surgery on what he called a “core muscle” injury.

“It gives us a chance to get him back in the spring and get him going for the offseason program,” Gase said.

Mosley recently told ESPN he had a platelet-rich plasma injection that he hoped would heal the injury and he would be able to avoid surgery.

Instead, he’ll focus on returning next season.

After five seasons in Baltimore, the 27-year-old Mosley signed a five-year, $85 million free agent deal in March with the Jets that included $51 million guaranteed.

He was projected to be the quarterback of coordinator Gregg Williams’ defense, and he got off to a terrific start with his new team. Mosley had six tackles, returned an interception for a touchdown, recovered a fumble and had two passes defensed against the Bills — but hurt his groin while breaking up a play in the end zone near the end of the third quarter.

Mosley sat out four games before returning against New England on Oct. 21. He aggravated the injury during that game and acknowledged he wasn’t at full strength. Mosley had just three assisted tackles against the Patriots — the last game he’d play this year.

Despite Mosley’s absence, the Jets have played well overall on defense this season. New York is ranked No. 6 in the NFL in total yards allowed and No. 1 against the run.

The Jets filled Mosley’s roster spot by claiming safety Bennett Jackson off waivers from the Ravens. It’s the second time New York has claimed Jackson, doing so in September when he was cut by Baltimore. The Jets waived him a few weeks later and re-signed him to the practice squad, but the Ravens signed him to their active roster in October.