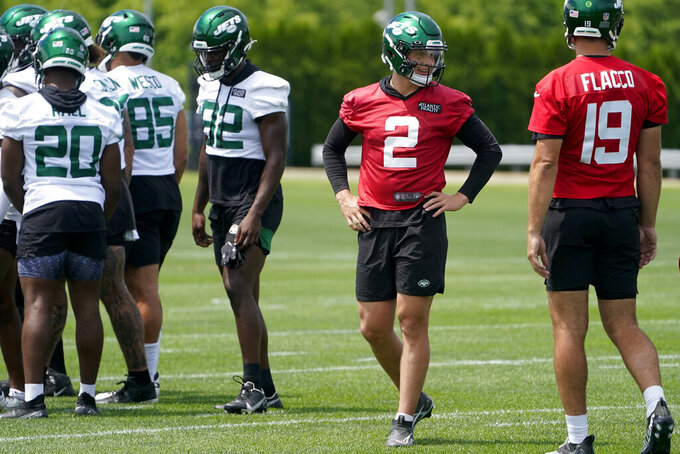 He and a bunch of his New York Jets teammates will get together somewhere — that's a secret for now — in mid-July to work on the football field a few days and sharpen their collective knowledge of the playbook.

It won't be all passes and catches, though. There will also be “fun activities,” as the quarterback called them. And that's where the most valuable “work” might come.

“I think that’s going to be more important than anything.”

For a franchise that has failed to make the postseason an NFL-worst 11 straight seasons, maybe having a little fun now might help down the line. After all, Jets fans are used to feeling frustrated, dreaming of another Super Bowl appearance — something that hasn't happened since the glory days of Joe Namath in 1969.

The 22-year-old Wilson represents the latest hope for the team and its fans to end those lengthy droughts. The No. 2 overall pick a year ago struggled through a down-and-up rookie season — marked by early struggles, a knee injury and a promising finish. All eyes are again on Wilson to take the next step in his development and confirm to the franchise — and all those who root for it — that it has the right guy under center for years to come.

“He doesn’t need to be Tom Brady this year,” coach Robert Saleh said. “Now if he ends up being that, that’s awesome, but that’s not the expectation for him.

“The expectation is for him to continue to climb that mountain that’s quarterback play in this league, and we’ve all got his back. He’s got a supporting cast that’s working its tail off and from there it’s just piecing it together.”

Saleh made sure to point out that while Wilson had a tough rookie year in which he threw just nine TD passes with 11 interceptions in 13 games, he also had an equally young group around him on offense and an O-line that was trying to jell.

Making things easier for Wilson to succeed — and, in turn, help the Jets win more after going 4-13 — was the primary focus during the offseason for general manager Joe Douglas.

Now, at least on paper, an offense that was among the NFL's worst last season appears to be much improved.

“They’ve done a great job,” Wilson said of Douglas and the front office. "You can tell the organization cares. You know they want to win just as badly as all of us. They’re doing everything they can to put me in the best position and everybody else around me.

But perhaps no one more so than Wilson.

No, as Saleh said, the former BYU star doesn't have to be Brady now. But he needs to be a lot better than he was. And there are early signs that could be the case when the season starts in September.

“What’s been cool about him ... his daily focus of what he’s trying to get done, not trying to have a laundry list of things each and every day,” offensive coordinator Mike LaFleur said. “It's, hey, let’s focus on this one thing, these two things, whatever it might be, and stay dialed into that.”

Wilson has bulked up a bit since last year, adjusting his diet and workout habits while trying to be healthier and stronger.

But the mental approach has been fine-tuned, too. His understanding of what he needs to do in the offense is clearer. That will help with his timing and decision-making, and the rest of it will play out on the field in front of him.

“For me, it’s how can I just go in there and make the best decision to put my team in the best position?” Wilson said. “Really, that’s all that matters. How can I just do what the coaches are asking me, and my time will come to do the off-schedule stuff.

"It’s really playing within the offense is where I need to have the biggest leap, just my progressions, getting through them cleanly, getting the ball out of my hands, giving it to guys — and let them go make plays.”