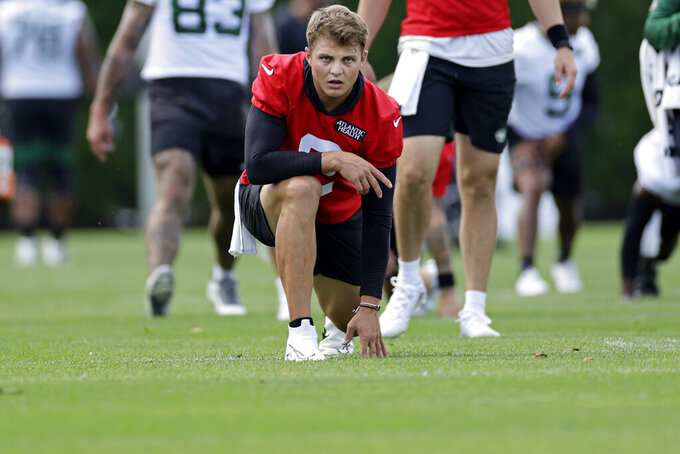 FLORHAM PARK, N.J. (AP) — The biggest difference Connor McGovern sees in Zach Wilson is what he hears in the huddle.

A year ago, Wilson was a wide-eyed rookie quarterback for the New York Jets trying to digest a new playbook while adjusting to life as the anointed next savior for a franchise desperate to win.

“If you guys knew what the play calls are, they're long and they're hard to repeat,” said McGovern, the Jets' center. “He could always get it out, but it was a little ‘fumbly’ last year at the start of camp and a little bit hesitant.”

“You just feel that in the huddle — there's none of that,” McGovern said. "It’s pure confidence. He fully has control over what is going on.”

Early in training camp, that's a great sign for Wilson and the Jets. Maybe even more than any throws or plays that last year's No. 2 overall draft pick has made in the team's first two practices of the summer.

“I think, really, it’s just you’re relaxed," Wilson said. "You have a better understanding of your job.”

Last year, the job was simply to learn and not repeat errors while gaining confidence.

Now there are heightened expectations that the young quarterback will take a massive step forward in his second season. Some might say the Jets' success this year will ultimately depend on it.

“It’s not true at all,” Wilson insisted. "Of course not. That’s why there are 22 guys that play — there’s 11 on offense and 11 on defense. There’s coaches that all have a hand. There’s a game plan. Of course, could you say if I don’t do my job, the offense isn’t going to run? Of course. I touch the ball every play.

“I have to do my one-eleventh of my job and everything else takes care of itself. That’s what I have to focus on: What’s my job on this play? And how can I make sure to get that done?”

To help Wilson achieve that, general manager Joe Douglas was busy in the offseason surrounding his quarterback with more playmaking talent. That included drafting wide receiver Garrett Wilson in the first round and running back Breece Hall in the second. Tight ends C.J. Uzomah and Tyler Conklin were signed in free agency, as was left guard Laken Tomlinson.

Offensive coordinator Mike LaFleur's unit looks a lot more potent and that should lift some of the burden off Wilson to have to make plays on his own.

“My job is I have to get the ball in their hands,” said Wilson, who had nine touchdown passes and 11 interceptions in 13 games last season. “Those guys are extremely talented, so I’m excited about that.”

Wilson was rushed out of the pocket on a handful of plays in practice Thursday by an aggressive defensive line, but he didn't force any throws. When he was in trouble, he tucked the ball and ran or threw it away — a positive development in his decision-making process.

“Yeah, just playing with that internal clock going off, having to move in and out of the pocket, go off schedule,” coach Robert Saleh said. “He looks much more comfortable doing that than he did a year ago. So that's a good thing.”

Wilson said he didn't necessarily focus this offseason on being more of a leader, but his actions certainly impressed his teammates.

There were throwing sessions in Nashville, Tennessee, with wide receiver Corey Davis. Wilson also worked out with wide receiver Braxton Berrios and running back Michael Carter in Miami. Wilson met up with wide receivers Elijah Moore, Denzel Mims, Jeff Smith and D.J. Montgomery in Scottsdale, Arizona. He capped the offseason by hosting several teammates at the Gozzer Ranch in Idaho — complete with a visit from Hockey Hall of Famer Wayne Gretzky.

“We went golfing one day, boating the next day, taught those guys how to wakesurf a little bit,” a smiling Wilson said. "It was a good bonding moment for all of us to sit by the fire at night and talk.”

Yes, there were s'mores. And major impressions made.

Uzomah witnessed firsthand how Joe Burrow helped lead Cincinnati to the Super Bowl by taking a big step in his second season. The tight end was asked if he thinks Wilson could take a similar leap in his abilities.

Still, Wilson refuses to be deterred by the expectations of others or the growing responsibility of being the face of the franchise. That's why he was able to brush aside finding himself out of the sports headlines and on the gossip pages instead this summer for rumors about his dating life.

“It comes with the position,” Wilson said. "So, really, it’s just handling my business, handling what matters and keeping my family tight. We’re all good. So, I’m excited to be here and really just focus on football.

“I’ve never mentally felt like I’m in a better spot than I am now.”