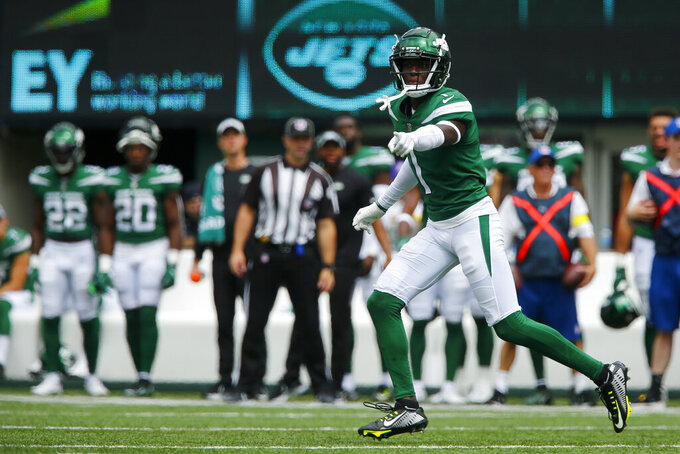 Ahmad Gardner has no problem earning his nickname.

The New York Jets’ rookie cornerback has gone by “Sauce” since he was a kid but veteran teammates want him to make a play in a regular-season game before they start using that moniker.

“I don’t mind. It happened in college,” Gardner said on the AP Pro Football Podcast. “It’s something that comes naturally. A playmaker is a playmaker. It’s not something I go into practice or games thinking I gotta do this so they can call me ‘Sauce.’ It’s just going to come naturally like it did in college.”

Gardner, who was selected No. 4 overall in the NFL draft after a standout career at Cincinnati, earned a starting job in training camp, beating out incumbent Bryce Hall.

“He’s been fantastic,” Jets coach Robert Saleh said. “Bryce Hall has had a very good training camp as well, but at the same time, with the overall body of work since OTAs, it’s clear that the kid is going to be pretty good.”

Gardner didn’t allow a touchdown in three seasons at Cincinnati. Of course, that’ll be tougher in the NFL. He’s already found the transition to the pros requires more film study.

“It’s not just the time. It’s more like I’m not just studying receivers, I gotta study receivers, tight ends, quarterbacks, even the offensive coordinator,” Gardner said. “I gotta see what kind of game plan they have, what kind of concept they like. So it’s more than just studying the best receiver that’s on the team like I used to do in college.”

“He asks a lot of questions in the meeting room, and that just makes me want to ask questions as well because it’s like he’s trying to pick the cornerback coach’s brain,” Gardner said of Hall. “I was like, ’Oh yeah, I got certain questions I need to be asking, too.”

Gardner was the first of three players selected by the Jets in the first round, along with Ohio State wide receiver Garrett Wilson (No. 10) and Florida State defensive end Jermaine Johnson (No. 26).

There are high expectations in New York for Gardner and the Jets, who have the NFL’s longest active postseason drought at 11 years. The Jets aren’t considered a playoff contender, but fans want to see them playing meaningful games in December.

“We’re just taking it in,” Gardner said. “We’re not getting caught up in outside noise because that can damage teams if teams focus on it. We just have been having our head down and been grinding. All the free agents, all the new draft picks, all the people that have been on the team, we are all just buying into the program, buying into what Coach Saleh says. He’s a great Coach and he’s going to lead us the right way.”

Gardner, naturally, has already signed an endorsement deal for his signature sauce with Buffalo Wild Wings. He was scheduled to make an appearance Thursday night at one of their locations in Wayne, New Jersey, where he would be signing autographs in the new sauce.

“You know, me, sauce and Buffalo Wild Wings, we all just have a special connection,” Gardner said. “I think it’s just going to be natural. When I get there, it’s going to be easy. I’m looking forward to just being able to meet the fans, have them meet me and be able to have the first signing with sauce. That’s crazy.”