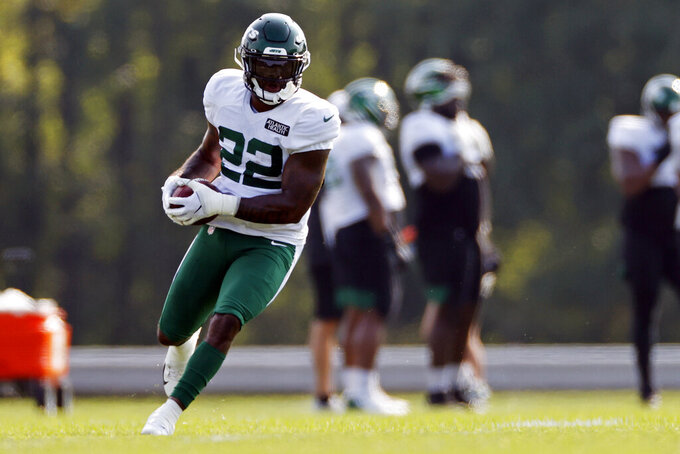 Rookie fourth-rounder La'Mical Perine injured his left ankle during the team's practice at MetLife Stadium on Sunday and his status was uncertain.

Coach Adam Gase said Perine would have an MRI later in the day to evaluate the nature and severity. Perine, who was drafted out of Florida, took a screen pass from Mike White and gained a few yards before going down awkwardly on the tackle.

He stayed down for a few moments as trainers checked on him, but was able to walk on his own to the sideline — with a noticeable limp. Trainers continued to examine his ankle before calling for a cart to take him back to the locker room.

Perine has been having a solid camp, showing off good speed and power as a complement to Le'Veon Bell and Frank Gore in the backfield. Bell and Gore are the only healthy running backs on the team with Perine hurt and Josh Adams still recovering from a hamstring issue.

New York acquired Kalen Ballage from Miami on Thursday, but the running back failed his physical and reverted back to the Dolphins — voiding the trade. The Jets had sent a conditional seventh-rounder in 2021 to Miami in the deal. The sides could revisit a trade once Ballage is healthy — but New York still has just two healthy players in the backfield.

The Jets have already been dealing with depth issues at wide receiver with Breshad Perriman sidelined with a knee injury and rookie second-rounder Denzel Mims missing all of camp with a hamstring issue.

Jeff Smith, who was running with the starters in Perriman's absence, has a shoulder injury and Gase said he'll be sidelined a few weeks. Rookie Lawrence Cager remains sidelined with a knee injury.

The team agreed to terms with Donte Moncrief, but he's still going through the COVID-19 protocols so he can't yet join the team.

That all has Gase trying to fill in the blanks on offense with any healthy bodies they have — with the season opener in Buffalo in two weeks.

“One, it's just making sure guys are getting the reps that we need,” Gase said. “The other thing is to be able to practice, we've got to have better numbers and right now, I think we're at six at the wideout spot. Hopefully we get some of those guys back this week. And then at running back, we're thinning out pretty quick.”

Star safety Marcus Maye also left the practice early with tightness in a calf. With Jamal Adams traded last month to Seattle, Maye is expected to be a major playmaker in the secondary. Gase didn't sound too concerned that Maye could miss any significant time.

"It was my decision to pull him out, and he wanted to keep practicing," the coach said. “But, there was no way we're going to allow him to continue with him feeling anything at that point.”