Jets' Saleh prepared to not coach Sunday due to COVID-19 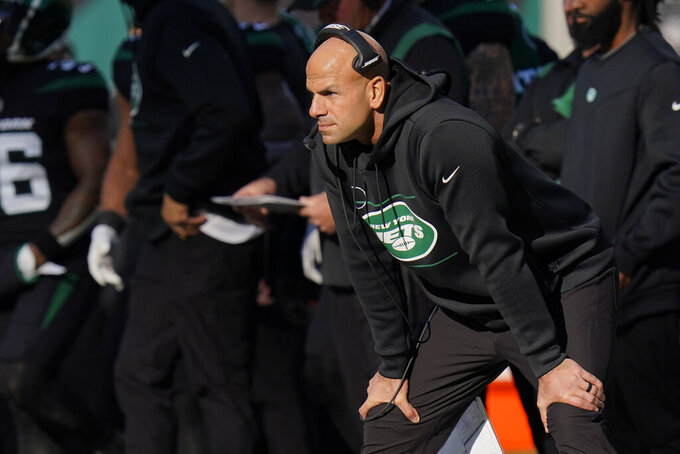 NEW YORK (AP) — Robert Saleh is holed up in a hotel room with COVID-19, away from his family and football team.

The New York Jets coach says he's feeling “good,” but has come to grips with the realization he might miss Sunday's game against the Jacksonville Jaguars.

“I took my test this morning,” Saleh said Friday during a video call. “I’ve got to get two negatives — that would be today and tomorrow. We’re proceeding as if I’m not coaching on Sunday. If I do come up with two negatives, it would be an easy adjustment, but we’re operating as if I will not be there Sunday.”

If Saleh isn't cleared, tight ends coach Ron Middleton will handle the head coaching duties in a matchup of rookie quarterbacks who were the first two picks in the draft: Jacksonville's Trevor Lawrence and New York's Zach Wilson.

“It’s frustrating, but at the same time, it’s things that everybody’s having to deal with," Saleh said.

Shortly after receiving his positive test earlier in the week, Saleh called Browns coach Kevin Stefanski, who returned to his team Wednesday after missing Monday’s home loss to Las Vegas because of COVID-19. Stefanski also had to sit out Cleveland's win at Pittsburgh last season after testing positive.

“I said, ‘Hey, man, what’s the protocol for this one?’” Saleh said. "He said, 'Well, everything is going to be fine. It’s all virtual anyway. You’re just going to miss practice, but Sunday is going to be miserable.'

The coronavirus has swept through several NFL teams the past two weeks, and the Jets had as many as 20 players on the COVID-19 list this week — including right guard Laurent Duvernay-Tardif, left guard Alijah Vera-Tucker, defensive linemen John Franklin-Myers and Folorunso Fatukasi and wide receiver Elijah Moore.

On top of that, the Jets have struggled, going 3-11 in Saleh’s first year and seeing key players on both sides of the ball getting injured.

“Adversity is what shapes everything,” Saleh said. “Obviously, this whole season has been filled with adversity, and why not finish it with a little bit more?”

Saleh, who said four of his seven children tested positive but have no symptoms, has participated in team meetings, which have been held remotely since last week. Middleton has been running the on-field practices all week — with the players who are left on the roster.

“It’s been a smooth operation,” Middleton said. “It’s kind of scary with everything that’s going on and whatnot and all the uncertainty, but people are just going about their business and it’s been pretty good. It’s been very smooth.”

The 56-year-old former tight end and longtime assistant would be serving as a head coach for the first time at any level if Saleh can't make it.

“You know, earlier in my career, that was the goal. And as you age, your goals change, you take different paths and whatnot," Middleton said. "But yeah, I’ve always wanted to be a head coach and I just appreciate Robert giving me this opportunity to get a taste of it. It’s been great.”

Middleton and Saleh are preparing to meet remotely Saturday to discuss in-game strategies on things like fourth downs, challenges and other potential scenarios.

“Ron knows this league, he’s an unbelievable man, unbelievable in terms of philosophy and just being able to talk to and bounce some ideas off of,” Saleh said. “He’s been around the ringer. So, there’s plenty of guys on the staff that are qualified for it, but it was just something I chose with Ron.”

NOTES: S Elijah Riley was ruled out for Sunday as he continues to go through the concussion protocol after being carted off the field at Miami with a head injury. ... WR Jamison Crowder is doubtful to play with a calf injury that caused him to miss practice all week. ... LT George Fant (knee) is expected to return after sitting out last week. ... CB Bryce Hall practiced after missing two days with a non-COVID illness. ... WR Jeff Smith and special teams ace Justin Hardee were activated from the reserve/COVID-19 list.