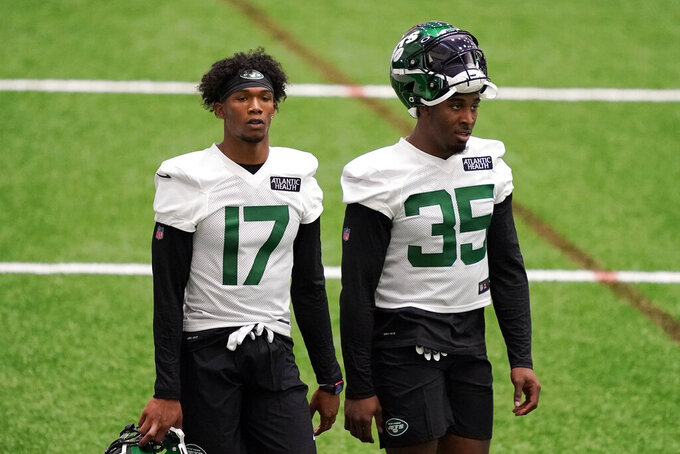 Wilson was the No. 10 overall pick last month out of Ohio State. He's expected to be an immediate contributor as a rookie, giving second-year quarterback Zach Wilson a speedy vertical threat in what should be an improved offense.

The fully guaranteed deal for Garrett Wilson includes a $12.1 million signing bonus, according to SNY.

Garrett Wilson had 70 receptions for 1,058 yards and 12 touchdowns for Ohio State, establishing himself as one of college football's top wide receivers. He was the second wide receiver drafted last month, two spots after Atlanta selected USC's Drake London.

With the Jets, Wilson joins a receiving corps that includes wideouts Corey Davis, Elijah Moore, Braxton Berrios and Denzel Mims, and tight ends C.J. Uzomah, Tyler Conklin and third-round pick Jeremy Ruckert. New York finished near the bottom of the league in several key categories, but the addition of Wilson could be a huge boost.

“Aside from mental makeup, he’s got tremendous body control, range, great route-running ability, he’s got great versatility, he can win those one on ones in man coverage and when teams are up there in press,” coach Robert Saleh said recen,tly of Wilson. “Obviously, there’s going to be things that he’s got to work on like every rookie does, but really excited to have him and the versatility that he’ll provide.”

His 4.38-second speed in the 40-yard dash had lots of teams interested in Wilson as did his knack for making contested catches.

“You just have to have plan,” Wilson said during rookie minicamp two weeks ago. “You’re playing against good players and you have to go out there with a plan. You just can’t expect to run around someone. You have to get on their shoulders and make them uncomfortable. There’s a lot of nuances to running routes and I’m excited to keep learning.”