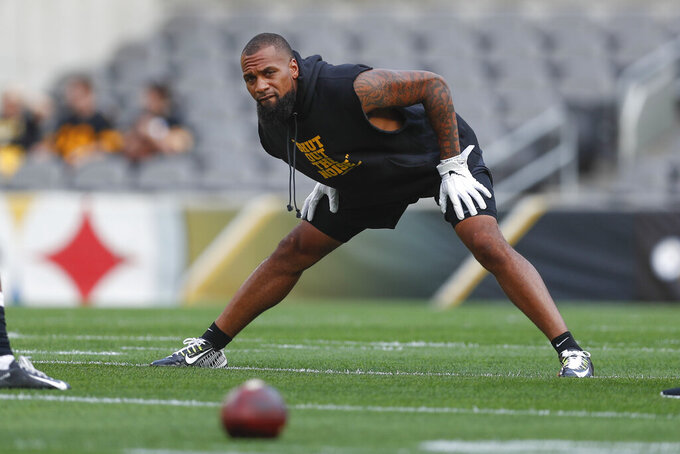 FILE - Pittsburgh Steelers wide receiver Donte Moncrief warms up before a preseason NFL football game against the Kansas City Chiefs, Saturday, Aug. 27, 2019, in Pittsburgh. The New York Jets have signed veteran Donte Moncrief to help their banged-up wide receiver corps. Moncrief agreed to terms with the Jets on Friday, Aug. 28, 2020, but the receiver had to go through COVID-19 protocols before officially signing. (AP Photo/Don Wright, File)

Moncrief agreed to terms with the Jets on Friday, but the receiver had to go through COVID-19 protocols before officially signing.

The 27-year-old Moncrief should give New York a boost at the receiver position as the team enters its final week of training camp. He has 204 receptions for 2,561 yards and 21 touchdowns in six NFL seasons. Moncrief was a third-round draft pick by Indianapolis in 2014 out of Mississippi. He played four seasons with the Colts and one with Jacksonville before splitting time last year with Pittsburgh and Carolina.

Breshad Perriman has been sidelined the past week with a knee injury and rookie second-rounder Denzel Mims has missed all of camp with a hamstring issue. Jeff Smith will be out a few weeks with a shoulder injury, while Lawrence Cager remains sidelined with a knee injury.

With the Jets needing help at wide receiver, they added Moncrief and also claimed wide receiver D.J. Montgomery off waivers from Cleveland on Sunday.

Maher signed with the Jets after last season following two seasons with Dallas. He was in a tight competition with Ficken, who took over as New York's kicker last year after the team went through a few others at the position, including Chandler Catanzaro, Kaare Vedvik and Taylor Bertolet.

“I think that Sam did a solid job last year, and Brett definitely has experience and everything like that,” special teams coordinator Brant Boyer said last week. “I see these guys neck and neck. They’ve both had good camps and we’ll see who shakes out, and that’s kind of how we’re handling it.”

Ficken might have sealed the competition during the Jets' practice at MetLife Stadium, when he made all of his field-goal attempts while Maher went 2 for 4, including misses from 48 and 52 yards. Ficken went just 19 for 27 on field goal attempts last season, but kicked a game-winning 44-yarder as time expired against Miami in Week 14.

Lewis, a cousin of former NFL cornerback Shawn Springs, was signed by the Cardinals in May as an undrafted free agent out of the Air Force Academy.