Jets struggling with rash of injuries at wide receiver spot 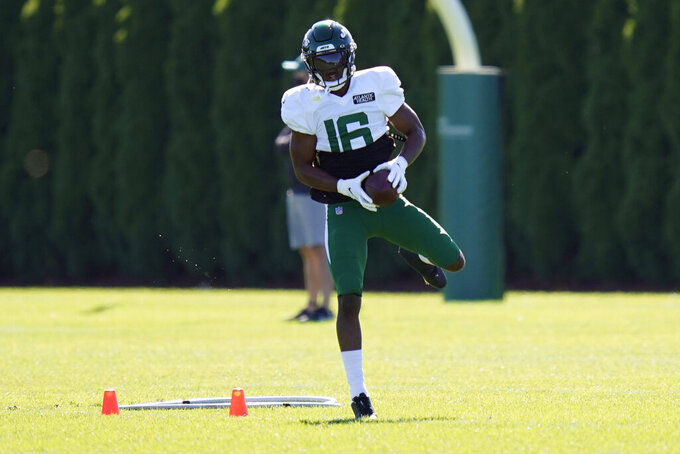 FLORHAM PARK, N.J. (AP) — Another day, another wide receiver banged up for the New York Jets.

Jeff Smith was the latest to leave practice after injuring a shoulder during drills Saturday. Coach Adam Gase said Smith was scheduled to have an MRI to determine the severity of the injury.

Smith, entering his second season with the team, had been seeing increased snaps with the starting offense because of a knee injury that has sidelined Breshad Perriman and a hamstring issue that has kept second-round pick Denzel Mims out since camp began.

“I mean, we’re down to six (wide receivers) in practice,” Gase said. “It’s hard to get guys in here. It takes, what, four days with the COVID testing and physicals and let alone a guy being in shape, and then knowing what to do. We just need guys to get healthy, get back. We just have to adjust.”

Jamison Crowder, who led the team with a career-high 78 catches last season, is the only healthy starter right now. The Jets also have Chris Hogan, who was signed last week and could end up starting, Braxton Berrios, Josh Malone, Jehu Chesson and George Campbell.

To try to help fill the void, New York agreed to terms on a deal with veteran Donte Moncrief. He played four seasons in Indianapolis and one year in Jacksonville before spending time last season in Pittsburgh and Carolina. Moncrief has 204 career catches for 2,561 yards and 21 touchdowns.

“You’re looking at a guy that’s able to move pretty good and he has experience in league and shouldn’t have a problem picking up the offense,” Gase said. “I think that it will probably happen pretty quick for him. When you haven’t seen a guy a lot, sometimes it’s hard to say what a guy is going to be in this offense.”

The Jets are also hopeful Perriman will be back soon. Gase originally thought Perriman would return Saturday, but the team is being cautious with the speedy receiver.

“Just trying to get the swelling down, trying to get him comfortable to run without any pain or anything that he feels like that’s holding him back,” Gase said. “He might come in one day and feel a lot better than he did the day before. We've just got to keep trying to find a way to make him progress and feel better.”

Smith was a quarterback early in his college career at Boston College before converting to wide receiver, where he developed into a speedy and reliable part of the Eagles' offense. He went undrafted, but the Jets signed him as a free agent last year because of his athleticism.

A hamstring injury sidelined him for most of last summer, but Smith impressed while on New York's practice squad and was promoted to the active roster late in the season. He had a 12-yard reception in his debut against Baltimore in Week 15, but hurt an ankle and went on season-ending injured reserve a few days later.

Smith had strung together a few impressive practices early this summer with both Vyncint Smith, who will miss several weeks after having surgery to repair a core muscle injury, and Mims sidelined.

Rookie Lawrence Cager, an undrafted free agent out of Georgia, also had several good performances lately, but he injured a knee and could be sidelined a while.

NOTES: Gase acknowledged he was “caught off-guard a little bit” when RB Le'Veon Bell took to Twitter to voice his displeasure about a lack of carries during a scrimmage Wednesday. Gase said it was because Bell had some tightness in a hamstring, but the running back tweeted that his hamstring was fine. Gase said the two spoke at length and are on the same page. “We had a good talk,” Gase said. “I told him I felt like our relationship was way better than him going on social media and him being able to just come talk to me. We talked about a lot of stuff. We talked about some things that maybe we can do a little different.” ... Gase said CB Brian Poole (dehydration) is in the "last phase" of being eased back to practice. ... LB James Burgess (lower back) and DL John Franklin-Myers (groin) returned. RG Greg Van Roten was limited after leaving Wednesday with an oblique issue. ... OL Conor McDermott (knee), RB Josh Adams (hamstring), CB Pierre Desir (hamstring), S Matthias Farley (hamstring), LB Tarell Basham (ankle) and DL Jabari Zuniga (quadriceps) remained sidelined.