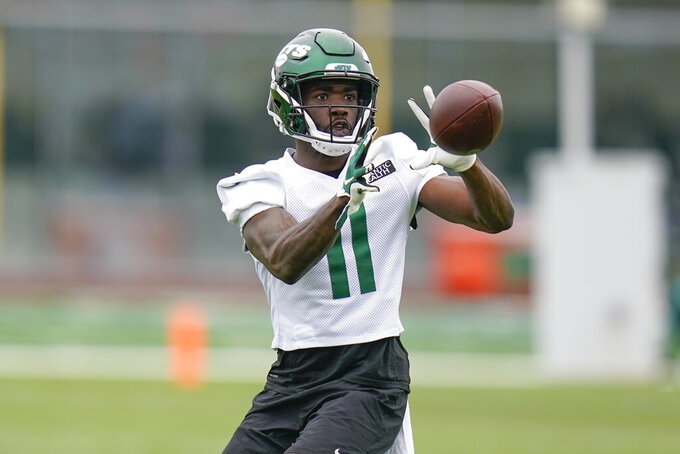 FILE -New York Jets' Denzel Mims participates in a drill at the NFL football team's training facility in Florham Park, N.J., Tuesday, May 24, 2022. Denzel Mims was the New York Jets' exciting new playmaker two summers ago, a potential game-changing wide receiver for years to come. A lot has happened since. And not a lot good.(AP Photo/Seth Wenig, File)

NEW YORK (AP) — Frustrated New York Jets wide receiver Denzel Mims has requested to be traded, according to a statement released Thursday by his agent.

“It’s just time,” agent Ron Slavin wrote. “Denzel has tried in good faith, but it is clear he does not have a future with the Jets.” The New York Post was the first outlet to report the request.

Mims, a second-round pick in 2020 out of Baylor, has struggled to find a role with the Jets. He has just 31 catches for 490 yards and no touchdowns in 20 games over two seasons.

He dealt with hamstring issues as a rookie, a case of food poisoning that caused him to lose 20 pounds last offseason, a bout with COVID-19 last season and saw his role in the offense dwindle to nearly nonexistent.

He was still low on the depth chart this summer, no better than sixth behind Corey Davis, Elijah Moore, Garrett Wilson, Braxton Berrios and Jeff Smith.

“Denzel vowed to come back better than ever this season and he worked extremely hard in the offseason to make that happen,” Slavin said. “Still, he has been given very few opportunities to work with the starting offense and get into a groove with them.

“We feel at this point, a trade is our only option since the Jets have repeatedly told us they will not be releasing him.”

Mims, who reported to training camp in good shape, said on Aug. 5 that he had lofty personal goals for this season.

“Hopefully I see myself on top,” he said, referring to the depth chart. “I mean, I feel like I put in enough work to be there. That’s the coaches’ decision, but I’ll continue to work my tail off and do everything I can.”

Mims added his only goal was to be a starting wide receiver.

But it appears that won’t happen with the Jets.

“Joe Douglas has always done right by Denzel,” Slavin said of the Jets’ general manager, “and we trust that he will make every effort to find a new team where he can be a contributor.”