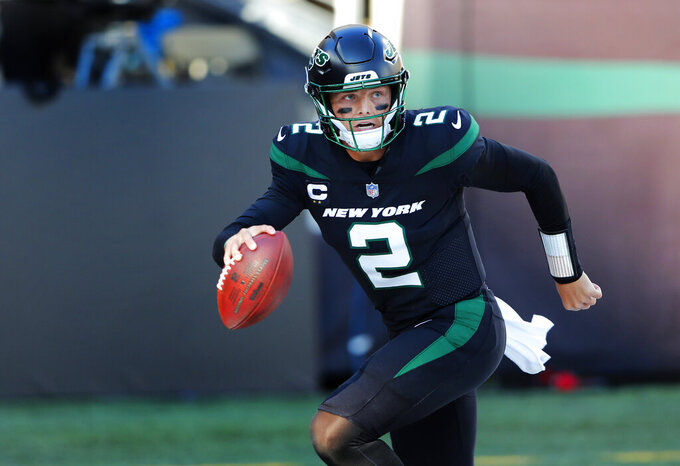 FLORHAM PARK, N.J. (AP) — Zach Wilson was ticked off three weeks ago after his worst game of the season.

The New York Jets' second-year quarterback was intercepted three times in a 22-17 loss to New England, with Bill Belichick's Patriots giving him fits all day.

Wilson was angry at himself for his mistakes, and it showed in some of his short postgame answers.

All eyes were on Wilson during the week leading up to the Jets' next game, with many fans and reporters critical of last year's No. 2 pick. Then, Wilson went out and had a solid performance while helping lead New York to a 20-17 win over Buffalo two weeks ago.

“I thought they were good emotions," Wilson recalled Thursday. "I mean, I was frustrated. And I still believe nobody outside this building knows what they’re talking about, so.”

When a reporter quipped that he does, a smiling Wilson fired back with: “You do? Why'd you turn down a coaching position?”

Wilson has shown some moxie during his 1 1/2 seasons in the NFL, a confidence that makes his teammates and coaches believe he can overcome adversity — and all that outside noise.

“It’s cliché, but I swear by it. And that’s why I believe in this kid so much, because he is extremely resilient. ... And that’s not going to change. No one is going to break him from that.”

Wilson showed as much in that stunning win over the Bills, during which he was an efficient 18 of 25 for 154 yards and one touchdown — and no interceptions.

“It’s a next play mentality,” Wilson said. “Taking the good and learning from the bad.”

Many questions remain about Wilson, especially as he prepares to face the Patriots again in New England on Sunday.

The Jets are 5-1 with Wilson as the starter this year, with the only loss that game against the Patriots. In his season debut at Pittsburgh in Week 4, he threw two interceptions but rallied New York from a 10-point fourth-quarter deficit to win. In the four other wins during that span, Wilson has not been picked off. The Jets have focused on a run-heavy offense that's predicated on Wilson being smart with the football and not forcing plays.

But that loss to New England remains a sticking point for Wilson's many critics.

“We’re kind of holding him hostage to four, five plays that he had against New England, in my opinion, at least externally,” coach Robert Saleh said earlier this week. "Internally, I think everybody’s got a lot of faith in Zach to be able to run this offense and get the ball where it needs to get to and do it in an efficient manner.

“And I do think that if we do need to put it on his back and put it on our receivers' backs and put it on the O-line to protect, I think we’re capable of doing that.”

Saleh reiterated that a few days later, saying that while Wilson made mistakes, they're also “four or five teachable moments in my mind.” He added: “I think we’re missing the big picture on it, that’s all.”

The Jets are still in the process of developing and evaluating Wilson, and he's being tested each week.

Meanwhile, New York is sitting at 6-3 and in prime position to end an 11-season playoff drought. A win in New England would put the Jets in first place in the AFC East.

“Excited because it’s another challenge, and this is a big divisional game for us, obviously,” Wilson said. "Not necessarily to feel like I have to prove anything of, ‘You know what, last game didn’t go great, I’ve got to do something different this time.'

“But just the progress of we won a big game last week and it’s on to the next and this is our next challenge. These guys are a great team, they do a great job defensively, so I am looking at it that way. I’m super excited for this game.”