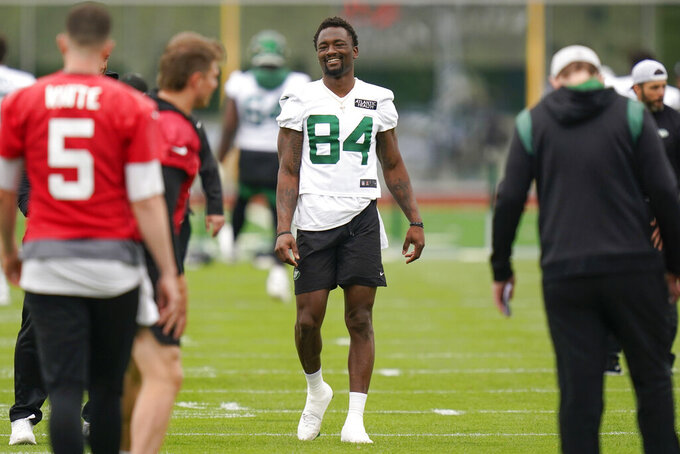 FLORHAM PARK, N.J. (AP) — Corey Davis thought he had moved on from the most painful loss of his life. The lingering sadness told him otherwise.

The New York Jets wide receiver's older brother Titus died of kidney cancer on Nov. 11, 2020, and Davis dealt with the grief the only way he knew how.

He played a football game the next day.

Then a member of the Tennessee Titans, Davis caught five passes for 65 yards in a loss to the Indianapolis Colts. He continued that season to use his brother's memory as motivation. That stayed true even last year after he signed a three-year, $37.5 million contract with the Jets.

But injuries and inconsistency made his first season in New York mostly one to forget. And the sorrow he felt from his brother's death never left him, and it only intensified after he was lost for the season following core muscle surgery.

“I was just going through a little bit mentally,” Davis said Thursday. "The past couple of years have been pretty rough and I feel like I haven’t really had the time to kind of dissect everything. I mean, I lost my brother and my homie, my best friend, and I never really had time to breathe after that happened. And I feel like this offseason was the first time I really, you know, kind of had the time to think about it and actually put him to rest.

“But it was tough. I got through it and I’m better because of it.”

Davis kept his feelings to himself, trying to navigate the pain alone until it became too much to handle. He finally poured his heart out to his wife Bailey, whose listened as he finally moved on from the emotions that he bottled up for so long.

“She was patient with me the whole time,” Davis said. “She didn’t (act) too pushy or, you know, too standoffish or whatever. She was right there, patient. And whenever I was ready to talk and kind of go through that, she was the one I went to.”

Davis knows his brother, who was two years older and had a few stops as a wide receiver in the NFL — including with the Jets — wouldn't want his death to derail his dreams.

Davis is ready — mentally and physically — to be the player he expects to be every time he takes the field. Not the one who played in only nine games last season, when he had 34 catches for 492 yards and four touchdowns — with some dropped passes mixed in.

“I kind of feel like I grew a lot mentally, spiritually,” the 27-year-old Davis said. “Just took a lot of steps forward. And it was necessary, what I needed. But, man, I feel good coming out of here. A lot more clarity, that's for sure.”

The Jets added more playmakers in the offseason by drafting speedy wide receiver Garrett Wilson in the first round and potential No. 1 running back Breece Hall in the second. They also signed tight ends C.J. Uzomah and Tyler Conklin in free agency, and re-signed versatile receiver Braxton Berrios.

But Davis is still a key part of what the Jets hope to do on offense with second-year quarterback Zach Wilson. He's the veteran among a promising group of receivers and a player who can change games with his abilities.

Davis is practicing during the voluntary portion of the offseason, saying he has felt completely healthy since March.

“I have missed it,” Davis said. “It feels like it’s been a little while, but we’re starting to get back into it and I feel good, running around healthy, so I've got to keep it going.”

Wilson and Davis spent a few days working out together in March in Nashville, part of the quarterback's efforts to build even stronger bonds with his receivers this offseason. Wilson had similar sessions in Arizona and Florida, and also had passing practices back home in Utah.

“That shows the type of leader he is, the type of guy he is to hop on a plane and go all across the country to throw with guys,” Davis said. “Shows how bad he wants it.”

Same for Davis, who joined the Jets with big expectations. This season, he plans to live up to them.

“I wanted to come here and do a lot of things — lead and, you know, be a leading receiver,” Davis said. “It’s just unfortunate that I got injured and that happened. But now it’s a new year and I’m ready to attack it.”