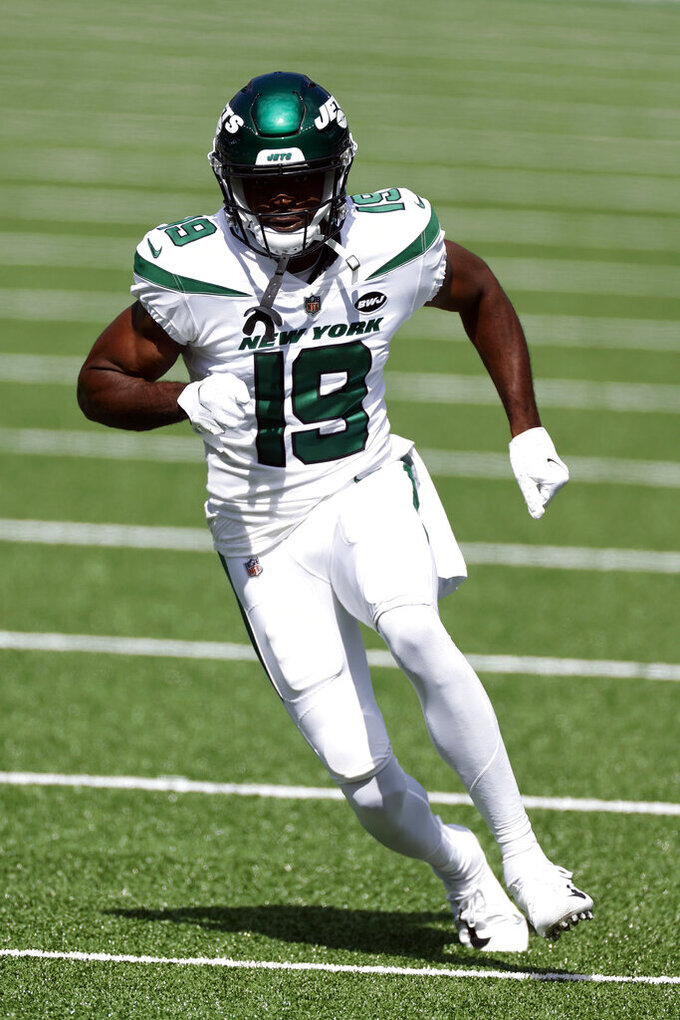 FLORHAM PARK, N.J. (AP) — New York Jets wide receivers Breshad Perriman and Jamison Crowder sat out practice with injuries, and they could miss the game at Indianapolis on Sunday.

Perriman injured his left ankle last Sunday in New York's 31-13 loss to San Francisco. Coach Adam Gase didn't sound optimistic Perriman will be able to play this week or in the Jets' next game against Denver next Thursday night because of the short turnaround.

“You can do the math what it probably looks like, unfortunately,” Gase said Wednesday. “I don’t want to count anybody out, but, I mean, just trying to be realistic on the situation where I think it’d be tough to get him back for that Denver game.”

Crowder missed the game against the 49ers after injuring a hamstring. Gase seemed a little more hopeful about his chances than those of Perriman of playing sometime in the next two games.

“Yeah, it might be a little different just because maybe there’s a chance we can get Crowder moving around here at the end of the week,” Gase said. “I don’t know, we’ve got to kind of see how he feels.”

Without Perriman and Crowder, the Jets' only wide receivers on the active roster are Chris Hogan and Josh Malone — and Hogan was limited with a rib injury.

Cornerback Quincy Wilson is in the concussion protocol, while nose tackle Steve McLendon sat out for personal reasons. Center Connor McGovern also didn't practice while dealing with a strained hamstring.

There was some positive injury news for the Jets: Backup quarterback Joe Flacco practiced fully for the first time since signing with the team and has a chance to be active Sunday behind starter Sam Darnold.

Flacco had surgery on his neck in April, spent training camp on the physically unable to perform list and then was added to the active roster before the start of the regular season. Mike White served as Darnold's backup during the first two games.