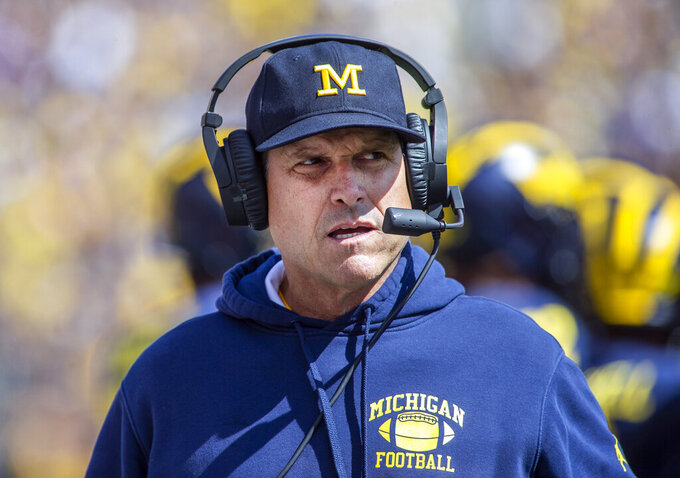 FILE - In this Sept. 7, 2019, file photo, Michigan head coach Jim Harbaugh is shown on the sidelines in the first half of an NCAA college football game against Army in Ann Arbor, Mich. Jim Harbaugh is pushing for a change that would allow football players to enter the NFL draft after their freshman or sophomore seasons in college. Harbaugh shared that idea among others in an open letter to the football community Thursday, May 7, 2020. Currently, players are not eligible for the NFL draft until they have been out of high school for at least three years. (AP Photo/Tony Ding, File)

ANN ARBOR, Mich. (AP) — Michigan coach Jim Harbaugh is pushing for a change that would allow football players to enter the NFL draft after one year in college.

“My first proposal is that we put this decision to `go or stay' in the hands of the individual and his family, not in the form of an NFL, NFLPA or NCAA rule while allowing the player to return to college football if he does not sign," Harbaugh wrote in an open letter to the football community Thursday.

Currently, players are not eligible until three NFL regular seasons have begun and ended following either their graduation from high school or graduation of the class with which they entered high school, whichever is earlier.

“The proposal described above would allow the individual to pursue his dream as a student and as a professional athlete in the time frame that best suits his best interests of his own free will and ability,” Harbaugh wrote.

A policy in the collective bargaining agreement — which runs through the 2030 season — between the NFL and the players' union prohibits players who have completed only their first or second years in college to be drafted. That rule has not been challenged for nearly 17 years. The league and the union, meanwhile, have shown no inclination of revising the rule.

“We have great respect for coach Harbaugh and appreciate that he offered his opinion," NFL spokesman Brian McCarthy said.

Former Ohio State running back Maurice Clarett sued the NFL in 2003, shortly after being suspended for receiving extra benefits and misleading investigators, to challenge it.

Clarett was ruled eligible for the 2004 draft by a U.S. District Judge in New York, but a federal appeals court put that ruling on hold and the U.S. Supreme Court refused to intervene. In 2005, the Denver Broncos drafted Clarett in the third round, cut him before the season, and he didn't play in the NFL.

Clarett, in a telephone interview, said he does not expect the NFL and NFLPA to support Harbaugh's proposal because the system in place benefits their interests. He hopes, though, that the conversation about possible change continues.

“The problem is, student-athletes don’t have a union or voice of any sort," Clarett told The Associated Press on Friday. “It’s hard to have these important conversations when there’s no one representing student-athletes as a group. I love Jim Harbaugh for what he’s trying to do, but his job is to coach football at Michigan. He doesn’t have the time or the legal expertise to combat the NFL or NFLPA on this issue.”

Former Alabama quarterback Tua Tagovailoa, drafted fifth overall by Miami last month, said at the NFL scouting combine that he agrees with the policy in place.

“I think the three-year rule is good," he said earlier this year in Indianapolis. “It’s different with basketball and baseball, I’d say, only because now you’re getting hit by guys of these nature. These are grown men. They have to feed their families. They’re trying to make a living as well. Gaining as much experience, gaining as much knowledge as you can from your college coaches is probably the best thing.”

American Football Coaches Association Executive Director Todd Berry said Harbaugh is not the only college coach who supports players being able to enter the draft at any time and possible return if undrafted.

“Probably half of our group supports the individuals having an opportunity to come out whenever, and the other half doesn’t,” he said.

Berry said as the NCAA moves toward allowing athletes compensation for their names, images and likenesses the lines are being blurred between student-athlete and professional athlete.

“They want to see some kind of line being drawn between being a student and being a professional.”

Berry added coaches are also concerned about players not being ready for the NFL. As it is, about 30 percent of juniors who enter the NFL draft annually go undrafted. Berry, a longtime coach in major college football, said players often have unrealistic perceptions of their own talents or receive bad advice when going pro.

“I always met with my athletes in the spring and just shockingly was always surprised by how many times they talked about their NFL careers. And I would say, you know, I would support that, but let’s try to not be third team on your own team first. Let’s start first before we get into that conversation,” Berry said.

Harbaugh also proposes a rule change that would allow undrafted players, who don't sign with a team in the league to return to compete in college if they stay academically eligible and do not get money from an agent.

He also suggests schools cover the costs of a completing a degree for a player who leaves school prior to graduating to enter the draft and stays in the league.

If a student-athlete left after his freshman season or a fourth season, according to Harbaugh's proposal, he would be eligible to have one year of his continuing education paid for by the school. If the player went pro after his second or third year in college, Harbaugh suggested he would be entitled to an additional two years of his education

“The proposal lets these guys pursue their dreams of playing professional and if they’re not drafted — no harm, no foul — they can come back and finish out school," Clarett said.

Harbaugh's proposals also include “broadening of the rules," to allow student‐athletes and their families to get advice from attorneys and agents without getting paid.

He also suggests eliminating the redshirt rule by giving all football players five years to compete. He wants coaches to be allowed to add more than 25 incoming freshmen and transfers each year.

Harbaugh previously championed a possible NCAA rule change that would allow all student-athletes to transfer one time without sitting out a season.

A former NFL quarterback, Harbaugh returned in 2015 to the school where he was a star after going 44-19-1 as coach of the San Francisco 49ers and winning the 2012 NFC championship.

“These views are my own and are not necessarily those of the University of Michigan,” Harbaugh wrote.