Johnson solid in pinch for Ravens, but playoff hopes fade 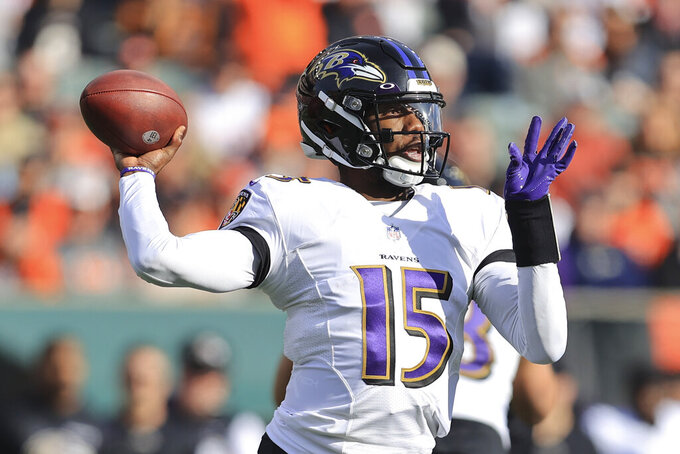 Baltimore Ravens quarterback Josh Johnson (15) throws during the first half of an NFL football game against the Cincinnati Bengals, Sunday, Dec. 26, 2021, in Cincinnati. (AP Photo/Aaron Doster)

CINCINNATI (AP) — A Baltimore Ravens team ravaged by injuries and illness had no choice but to put Sunday’s battle for first place at Cincinnati in the hands of a quarterback who was signed 10 days earlier.

Josh Johnson couldn’t quite come through, and Baltimore (8-7) dropped out of a first-place tie with the Bengals in the AFC North with its 41-21 loss.

The Ravens still have a chance to make the playoffs and finish the season with home games against the Los Angeles Rams next Sunday and the Pittsburgh Steelers on Jan. 9.

“There’s nothing to be explained,” wide receiver James Proche said. “We need these if we want to continue playing football. We still have everything in front of us. We can still make these playoffs and make a run.”

“You know, the guys are a joy to be around,” Harbaugh said. “They work. They’re into it, and they were locked in all week. Josh was locked in. Guys were rallying and were in the meetings (Saturday) night and just studying things. That’s the process of it that I think I relish and enjoy, because you’ve got those kinds of guys who just dig into everything they can do. That’s what you hope for. That’s what you ask for, and that’s what they did.”

“I just try to stay focused on doing my job,” Johnson said. “I try not to focus on things I can’t control. I was just grateful for the opportunity today.”

Jackson was one of 11 Ravens players sidelined by injuries, seven of which were season-ending. Six more players, including backup quarterback Tyler Huntley, were added to Baltimore’s COVID-19 list in the week before the game. Practice-squad QB Chris Streveler already was on the list, forcing Johnson into cramming mode.

“It’s been one thing after another,” inside linebacker Patrick Queen said. “You just have to work hard and prepare and go out and perform.”

Getting Jackson, the 2019 NFL MVP, back after missing the last two weeks of practice should give Baltimore a much better chance of snapping a losing streak that now has reached four games. It also would give a boost to a rushing attack that produced a mere 39 yards on Sunday. The Ravens went into the game averaging 144.3 rushing yards.

Baltimore, trying to avoid its first sub-.500 finish since going 5-11 in 2015, also lost cornerback Anthony Averett in the first quarter with a chest injury. The team’s top two quarterbacks, Marlon Humphrey and Marcus Peters, were already out for the season with injuries.

Harbaugh anticipates getting several players back, though he couldn’t say how many.

“I think we’ll get a number of guys back. We expect to. That would help us tremendously,” he said.