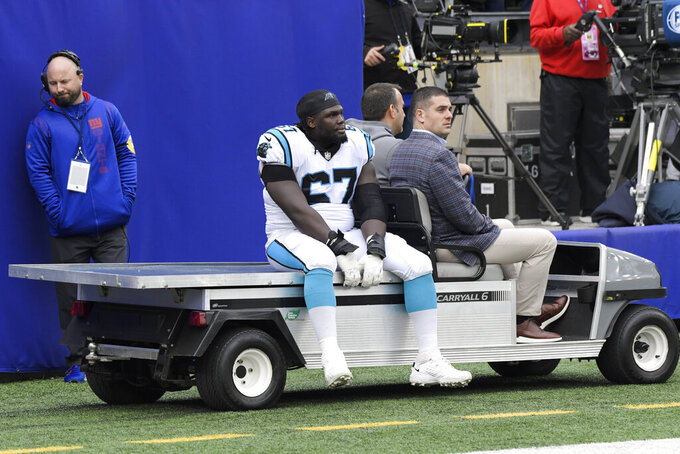 Carolina Panthers guard John Miller (67) is carted off the field during the second half of an NFL football game against the New York Giants, Sunday, Oct. 24, 2021, in East Rutherford, N.J. (AP Photo/Bill Kostroun)

EAST RUTHERFORD, N.J. (AP) — With most of his top skill players sidelined with injuries, Daniel Jones did a little of bit of everything for the New York Giants. He ran the ball, threw a touchdown pass and even made a great catch on a trick play.

Combine that with the best game of the year from coordinator Pat Graham's defense and the Giants got a rare win Sunday against the slumping Carolina Panthers.

Jones threw a 5-yard TD pass and made a spectacular one-handed 16-yard catch on the game's only meaningful touchdown drive in a 25-3 win Sunday.

“Yeah, I think that’s an important win for us," Jones said after the Giants (2-5) bounced back from their two worst losses of the season. “You know, we’ve had some tough games and some close games, but you know, we believe in who we are as a team, and what we’re doing as a team and where we’re going.”

Pettis coincidently made the slightly overthrown pass on the flea flicker which Jones caught with the finger tips of his throwing hand.

The catch was a hot topic. Jones, who finished 23 of 33 for 203 yards with six carries for 30 yards, didn't remember ever catching a pass in college. He laughed when asked if teammates are calling him 'Odell" after one-time Giants and current Cleveland Browns receiver Odell Beckham Jr.

Jones even made fun of himself by saying he ran a bad route after he handed off to Devantae Booker on a sweep left. The running back pitched to Pettis, whose lob was a little too far.

“I thought it was a dime,” Pettis said, making everyone laugh by using Jones' nickname “Danny Dimes.”

Coach Joe Judge said the Giants took the play out of the vault at the suggestion of quarterbacks coach Jerry Schuplinski. He noted Carolina ran the same play against Detroit last year.

New York's much-maligned defense had its best game of the season, limiting Carolina to 173 yards, forcing a safety on an intentional grounding, and getting an interception from James Bradberry, another former Panther. Rookie linebacker Azeez Ojulari had 2 1/2 of New York's six sacks. Carolina was 2 of 15 on third downs.

“Today it came together for us defensively and goes for the the team, we found a way to win,” safety Logan Ryan said. “That was the biggest thing. And now ... we’ve got to replicate that.”

The Panthers looked good on the opening series of the game. Former Jet Sam Darnold drove them 46 yards on 13 plays before settling for a 45-yard field goal by Zane Gonzalez that hit the upright but went through.

That's was basically it for the game. Darnold, traded to Carolina in the offseason, was lifted in the fourth quarter after hitting 16 of 25 passes for 111 yards and the pick. PJ Walker finished up.

Rhule said Darnold will start next week and he be the quarterback moving forward. His bigger concern was seeing his team match the urgency of the Giants.

Darnold said the offense has had a problem finding a rhythm the past month.

“When you get to that point of getting pulled, I just internalize it,” Darnold said. “Honestly, it’s one of those situations that is what it is. He thought at the time that that would provide a spark. It’s his decision and I live with it.”

The Giants, who got their first home victory in four tries in 2021, thought they had a 2-yard TD pass from Jones to Kyle Rudolph in the second quarter. Replay showed the tight end short of the end zone and New York failed on three attempts from inside the 1-yard line.

New York did manage to get two points when Darnold was called for intentional grounding on a pass from the end zone under heavy pressure.

After the ensuing free kick, Jones hit Pettis on a 27-yard slant to set up Gano's 49-yard field goal for a 5-3 edge that eventually gave New York its first halftime lead.

The review of the Jones-Rudolph touchdown took less than two minutes. The one after the Jones-to-Pettis catch lasted longer than four minutes. It even seemed the call might be overturned but referee Carl Cheffers eventually said the call on the field was correct.

Panthers: C.J. Henderson (shoulder) and G John Miller (ankle) left in the second half with injuries. Miller did not return

Giants: at Kansas City for a Monday night game against the Chiefs.