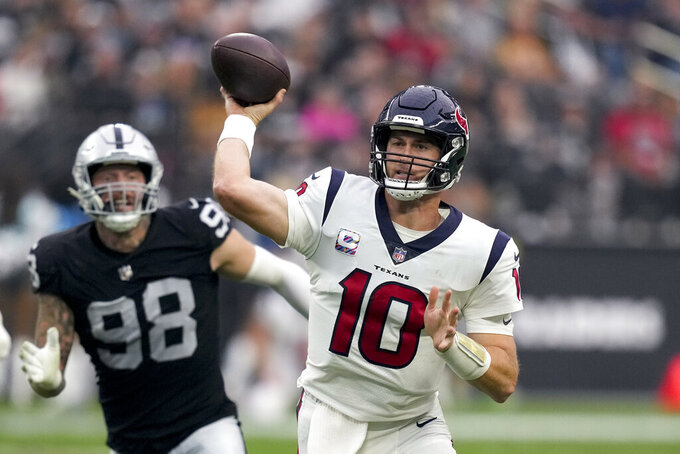 LAS VEGAS (AP) — The way Josh Jacobs is running, the Las Vegas Raiders’ offensive line is going to have a nice Christmas.

Jacobs rushed for 143 yards and three second-half touchdowns, and the Raiders ran away from the Houston Texans 38-20 on Sunday.

“I think it’s more of a credit to the offensive line,” said Jacobs, who topped 100 yards for the third straight game. “I come back to them all the time because I feel like it’s the first time in a long time where I’ve had four to five yards without being touched by anybody. They’re making it pretty easy on me, and I’m gonna make sure I take care of them for sure.”

In a battle of one-win teams coming off byes, the Raiders (2-4) dominated the Texans (1-4-1) after halftime, outscoring them 28-10 behind 227 yards of offense, including 98 from Jacobs on the ground.

“We expected the game to come down to the fourth quarter,” Raiders coach Josh McDaniels said. “It’s all them — the players win the game. They settled down, they got into the flow of the game, they understood how Houston was playing us and they made the plays.”

Las Vegas, which erased a three-point, fourth-quarter deficit, scored on four straight possessions before safety Duron Harmon sealed the win by intercepting Davis Mills and returning it 73 yards for a touchdown.

“There’s always going to be a point in the game where you can put somebody away, or you can give them life,” Harmon said. “That’s what we were talking about, let’s put them away.”

Derek Carr completed 21 of 27 passes for 241 yards and a touchdown. Davante Adams had eight receptions for 95 yards.

The Raiders finished with a season-high 400 yards of offense.

Jacobs, who is playing for a contract after not having his fifth-year option picked up before the season, has rushed for 441 yards in his last three games. He became the first Raider to rush for more than 100 yards in three straight games since Napoleon Kaufman in 1997. Jacobs is the sixth player in the past six seasons with three 100-plus-yard rushing games in a row.

“The biggest thing for me is I want to get in the playoffs,” Jacobs said. “I want to go on a run and actually ... experience that. I think we have a special group of guys that when we’re all clicking offensively and defensively, we’re a scary team.”

Mills completed 28 of 40 attempts for 302 yards and two touchdowns, along with his pick-6 to Harmon. Dameon Pierce led the Texans’ rushing attack with 92 yards on 20 carries.

“Offensively we saw signs of what we can be,” said Texans coach Lovie Smith, whose team gained a season-high 404 yards. “Defensively we just didn’t play well enough, kind of simple as that. I thought first half-wise we were in pretty good shape, but second half we didn’t do what we needed to.”

Las Vegas' Daniel Carlson has made 39 straight field goals since Week 8 of last season, the longest active streak in the NFL and the fifth-longest streak in history. Carlson is 5 for 5 on field goals of 50 or more yards this season and 18 for 21 (85.7%) on such kicks since entering the league in 2018, the best in the NFL during that span for kickers with a minimum of 20 attempts.

Chandler Jones had his first half-sack as a Raider when he combined with Clelin Ferrell to bring down Mills to end the first half. Jones has 108 sacks since entering the league in 2012, the third most in that span. He passed Pat Swilling (107 1/2) for the 26th most in NFL history.

Adams surpassed 700 career receptions. His 707 catches rank fourth in the NFL since he entered the league in 2014.